When Ethan Wendling was a freshman, he admired the seniors on the basketball team, so much so that he still considers them to be better than he was his senior season.

“I didn’t realize we were at that level too when we were seniors,” he said.

Turns out Wendling and his senior classmates were awfully good.

Wendling, who earned salutatorian honors, was a member of the basketball and baseball teams that won sectional championships.

“I don’t think any of us quite realized how good we are,” he said. “We don’t have many cocky guys on the team. Anick (Hartsell) is a 1,000 point scorer (in basketball). He would never bring it up.”

At the beginning of the basketball season, the group didn’t necessarily think they were good enough to win the sectional.

“Once we got there, we knew we could do it, but in the back of our heads, I don’t think we really thought we would lose (the) regional championship by two,” Wendling said. “I don’t think we’ve really pictured (something) that great out of us. I think we all just worked hard and earned it at the end.”

The hard work paid off both in athletic competition and in the classroom for Wendling, who finished with a 4.49 grade point average.

The goal going into high school was to get all “A’s.” The rule in his house was to try your hardest, which his parents knew meant he should get all “A’s.”

And if he slacked off?

That was enough motivation for Wendling.

The recent graduate actually would not have been salutatorian if not for the early graduation of a fellow classmate.

Abby Jones was at the top of the 2021 class when she managed to graduate last school year.

With her departure, that opened the door for him to give the salutatorian speech during Southwestern’s commencement ceremony, a fact he noted that night.

Wendling, who was also a member of Student Council, academic teams and Fellowship of Christian Athletes, earned that opportunity despite the difficulty of finishing out his junior year virtually.

It was difficult to motivate himself when the district went to virtual learning due to the COVID-19 pandemic. He would wake up at 8 a.m. and plan to be finished with his school work by noon, but find himself not starting until 11:30 a.m.

The first week, coach Chris Ingels told the baseball team to keep working out because there was a chance they would still play.

But the biggest thing was not seeing anyone, he said. He spent most of his time working for his dad when he wasn’t doing school work.

He found a silver lining with the entire experience.

Since he was on his own, he believes it will help when he leaves for Purdue University in the fall.

“I do think that will help when we go to college because we’ve had that experience of, no one’s there to tell you do this, do this, do this,” he said. “We have to figure it out on our own.”

Wendling plans to study engineering at Purdue. Freshmen spend their first year deciding exactly what they want to do in that field, but he is leaning toward mechanical and construction engineering.

His dad owns a construction business and the recent graduate has been around it his entire life. 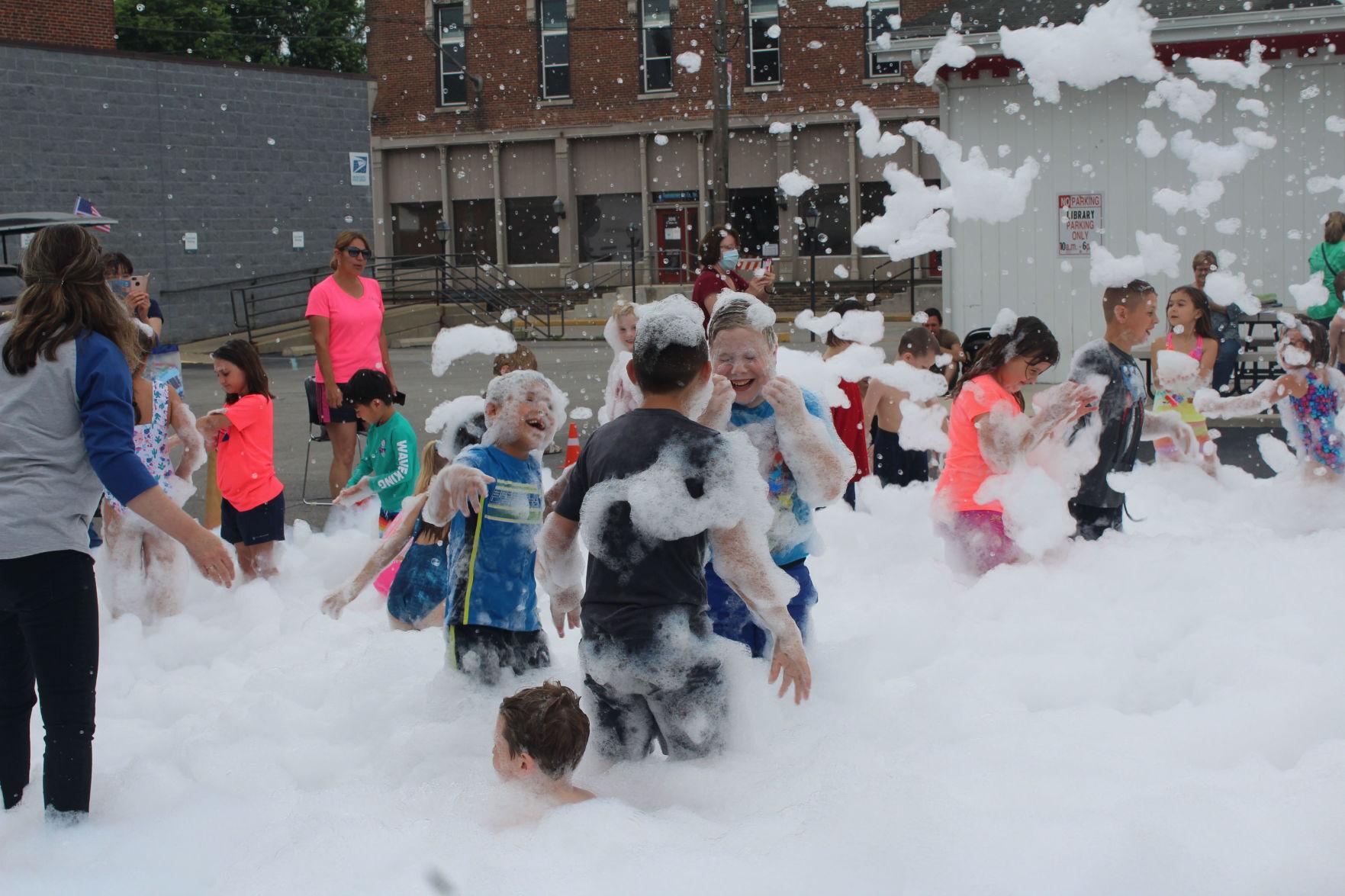 Children enjoy foam shot out of a cannon during the Foam Happy party behind the Morristown Library Tuesday afternoon. The library hosted the event as part of its summer reading enrollment open house. The hypo-allergenic foam was brought to the library by Daniel and Elle Lusk after Daniel was unable to perform his annual magic show this year due to the COVID-19 pandemic.

The Shelbyville/Shelby County Animal Shelter has seen a rise in animals that Administrative Assistant Chris Browder is pretty sure were dumped.

“I can’t prove because they’re not microchipped, but we have so many unanswered strays, and that usually doesn’t happen,” she said. “You’ll get a stray here and there but for the most part if you put that stray on Facebook, the tips come pouring in.”

In addition to the increase in stray animals picked up, the shelter is also getting more calls than normal from pet owners looking to surrender their animal. Browder said many of these calls come from people who live out of the county, and the shelter can only accept relinquished pets from Shelby County residents.

“We are getting inundated with calls wanting to surrender pets,” she said. “They’re from other counties, and they want to bring them here which of course we can’t take, and that’s been on the rise. We used to get that phone call once a week, but now we get anywhere from 5-10 a day.”

When COVID first broke out last year, the shelter stopped accepting walk-ins and moved to appointment only.

“We have people walk in – we’re still doing appointment only – we get some information and come to find out they’re from another county,” Browder said. “It’s frustrating because we want to be able to help these guys, and if we just knew their names and vet history, it’s been head scratching, the turn of events since covid, how many unanswered strays.”

Browder said people from other counties try to drop their animals off because other shelters are not accepting relinquished pets or are simply full.

“It’s a compliment, but it doesn’t help the situation: people also have said ‘We follow you on Facebook, we know what you do with these animals, we learned about you because of Justice and this is where we want the animal to be,’” she added.

But if they’re from another county, Browder has to turn them away.

“Some understand, some get pretty upset, some say ‘What are you gonna do when I dump it in your county?’” she said.

Browder said dumping has been on the rise since the beginning of the year, more so dogs than cats. When the shelter picks up a stray, the Animal Control officer searches the area to find an owner and Browder puts a picture of the animal on the shelter’s Facebook page, where users can provide tips.

“Dogs we put on [Facebook] and get nothing,” she said. “Before Animal Control brings it to the shelter they knock on a lot of doors. They start in the radius where the animal was found, and work out from there.”

“Our attempt is to get it home and not bring it back here,” she continued. “We ask a lot of questions and same answer. We just had one from yesterday, and nothing. We had two Chihuahuas left in a crate on North State Road 9.” 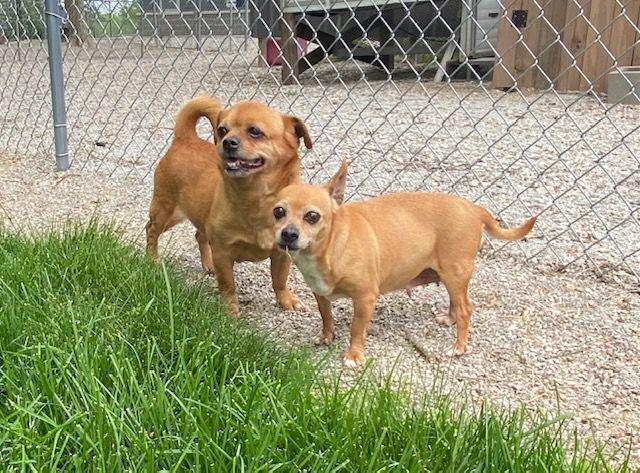 An Animal Control officer picked up Martha (left) and Wilma, two chihuahuas who were found in a crate alongside North State Road 9 in Shelbyville. Animal Shelter Director Chris Browder said dumping pets has been on the rise since the beginning of the year.

“Pork and Beans, another pair of dogs, that were we say dumped because they canvassed the area quite efficiently to find information, and when no one knows anything its like they dropped from the sky,” she said.

Browder encourages pet owners to relinquish the animal, not dump it. The relinquishment process begins with a phone call.

“We get all the information over the phone, because we’re still trying to get people in and out quickly,” she said. “We have a lot of people volunteer and we still don’t want 20 people in the office, so we try to keep it as efficient as possible. We find out how old it is, what it likes/dislikes and vet history. At that point we get an address, that’s when we find out they’re not from here. We get all the info and we schedule [a drop off date]. It can be a few days or a week, so we don’t get too many animals in at once.”

Browder advises the pet owner to bring their vet records and anything that helps the animal transition to shelter life, like a toy.

If vaccinated, the pet owner needs a certificate to prove it has rabies shot. If they’re a puppy or kitten, that doesn’t apply because they can’t get the shot until they’re older. All the money goes into general fund at City Hall.

Relinquishment allows the shelter to learn about the animal’s behavior, likes and dislikes. For example, if a person relinquishes the animal, shelter staff can learn that it’s not good with other animals or with small children.

“Having a pet relinquished just really helps us find the pet a perfect home,” Browder said.

The animal shelter can be reached at 317-392-5127 or cbrowder@cityofshelbyvillein.com.

Chris Browder is the Administrative Assistant for the Shelbyville/Shelby County Animal Shelter.

“We lost another auxiliary member Joyce Richey on May 31st, 2021,” the minute-taker noted.

The next meeting should be July 1, but due to the July 4 weekend, they will not meet until August 5.

The men’s 10th district meeting will be June 5 meal starting at noon. Margie Markley and Debbie Blevins will be fixing meatloaf and all of fixing.

On June 21 will be the installation of men officers. Meal starts 6 p.m.; insulation of officers starts at 7 p.m. Margie Markley and Debbie Blevins will be fixing lasagna, salad and bread.

Expressing concern that a representative was not in attendance regarding the rezoning of property on West McKay Road for a potential apartment complex, the City Council approved a continuance until the next meeting.

Following a favorable recommendation by a 5-4 vote from the Shelbyville Plan Commission, the proposed rezoning from R2 (residential duplex) to RM (residential multi-family) did not move forward for the property at 1451 W. McKay Road.

Council member Nathan Willis noted there had been multiple scheduling issues and expressed frustration that the council was taking the word of Prince Alexander Architecture LLC, the representative of the petitioner for the rezone, that it would improve current properties but the company was not taking basic steps for what the process entailed.

The property in question is about 41/2 acres. The land petitioner Christian Investments, LLC, is asking to rezone is 21/2 acres.

Board members also expressed other concerns, including an increase in traffic in that area.

Plan Director Adam Rude said he did not believe a traffic impact study had been done yet.

“That is another standard that will need to be met,” he said.

The Board of Zoning and Appeals capped the number of units in the possible complex at 50 units if the rezoning gets approved by the City Council.

“The one thing that’s bothered me is we’ve had no positive response from the members of the community that live in that area,” he said. “None that we’re aware of.”

He went onto say that he expects a new complex would impact property value.