Thank you for reading!

Get access to ALL of our site and our brand new electronic edition!

Not already a subscriber?

If you need to purchase a subscription.

News
Utility Board, Board of Works approve various items

“We will sit here quietly and be good people.”

“What happens if we don’t want to sit quietly?”

Mayor Tom DeBaun and Board of Works member David Finkel exchanged playful banter in the 10-or-so minutes between the pre-meeting and Public Utility Board meeting Tuesday morning.

These conversations are live-streamed on the city’s Facebook page, along with the pre-meeting and meeting. In response to comments online about the city wasting time, DeBaun explained this to the public in a meeting a couple weeks ago.

There is typically five to 10 minutes of downtime in between the pre-meeting and actual board meeting, which are scheduled for 8:15 a.m. and 8:30 a.m., respectively. Legally, the board cannot start the actual meeting until the time the city announced, so they fill the downtime between the meetings catching up on each other’s lives and discussing sports.

When it was time for the meeting to begin, DeBaun called the Public Utility Board to order and they approved one request by MS4 Director Derrick Byers.

Byers requested an annual transfer of funds from MS4 funds to various funds.

“These will cover some of the salaries that we pay a proportion of, including FICA and Medicaid,” he said.

Following the Utility Board meeting, the Board of Works attended to three items.

First, they approved an order to appear for the property owner of 609 Morris Ave. Plan Director Adam Rude said his office had been working on this case for a little bit.

“There’s trash and debris in the yard and near the garage,” he said.

The request was approved. DeBaun explained that the board has issued several orders to appear over the last couple of weeks, but many of those cases were being settled and the board would not see those owners.

Lastly, the board approved to designate an area on Franklin Street as a loading area for the businesses on the Public Square affected by the construction.

“Because of the construction, they have a rear entrance on Franklin Street, and they’re asking for a loading space to be designated on Franklin Street for the use of multiple businesses, those being Three Sisters, Studio 9 Salon, The Basile Law Office and American Family Insurance,” DeBaun said. 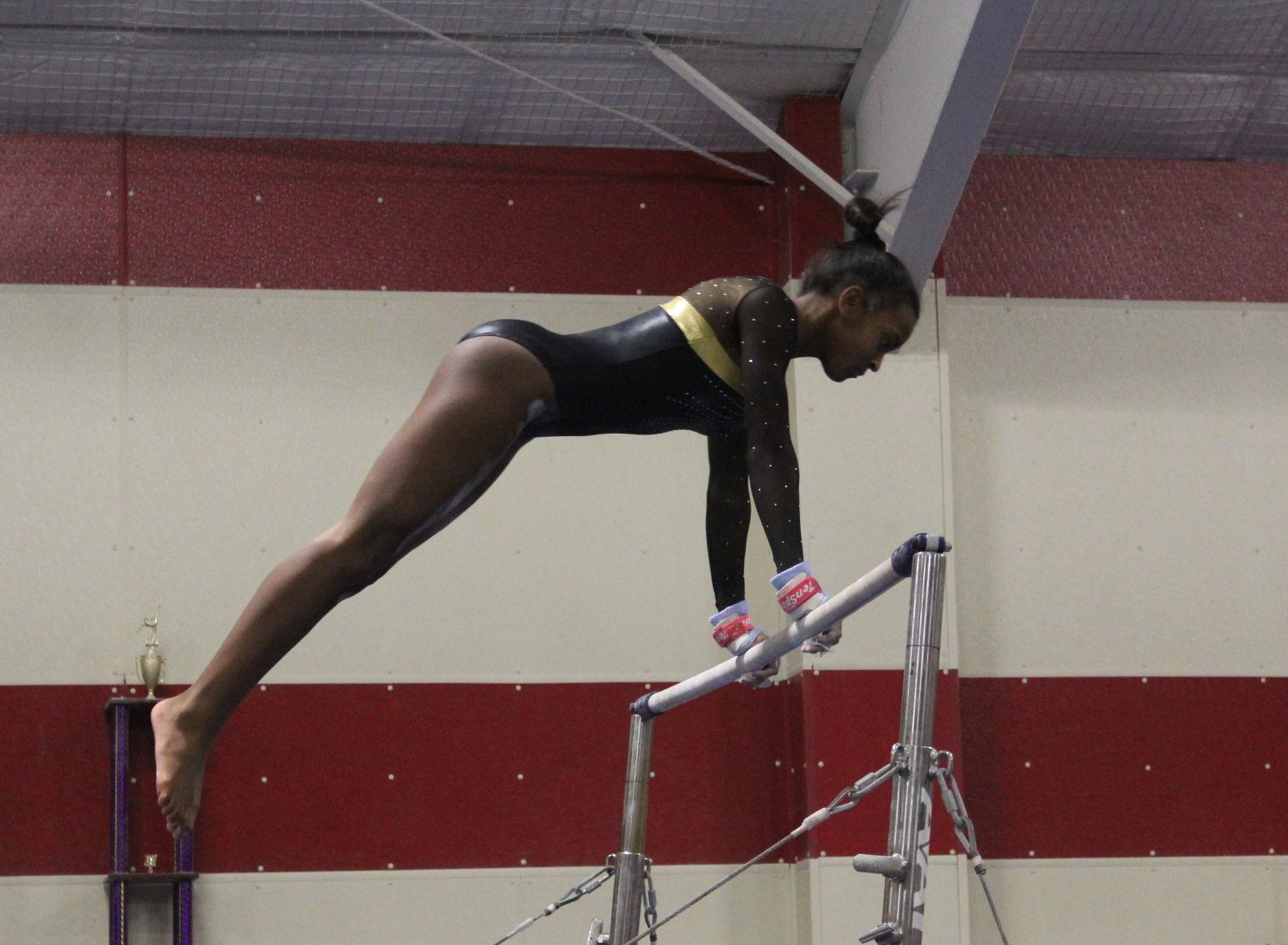 Kaliyah Brown competes in the uneven bars on Monday evening. The Shelbyville gymnastics team, which is mostly made up of freshmen this year, opened its season against Richmond and one competitor from Fishers, falling to the Red Devils 101.75-87.325. The story can be found on page A6.

INDIANAPOLIS — Approximately 150 Indiana National Guardsmen along with personnel from the Indiana Department of Health will help distribute, transport and administer the COVID-19 vaccine to Hoosiers across the state.

“We go when we’re called, and now this new assignment to help deliver the COVID-19 vaccine will be another integral cog to turn the tide in our favor against the coronavirus,” said Brig. Gen. Dale Lyles, the adjutant general and leader of the Indiana National Guard. 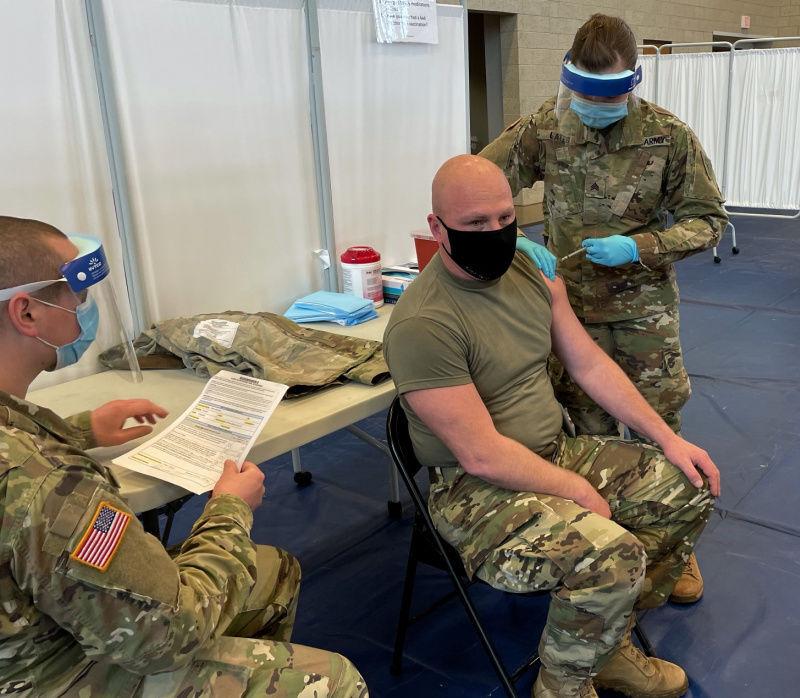 Guardsmen will come from the ranks of those who are already involved in the pandemic battle from the long-term care facility and testing-site missions.

As long-term care facilities recover, Guardsmen will pivot to the distribution mission and vaccination operations. Yet, facilities with the most urgent need, as determined by the Indiana Department of Health, will still receive Guard support until Feb. 28.

The National Guard’s mission remains vital to the preservation of life, safety and welfare of long-term care facility residents as Guardsmen continue to provide infection control, administrative support and in some cases resident support where needed.

Store Manager Amanda Neace said she’s worked there for 17 years and hasn’t seen anything like this. Neace was assistant manager for 14 years before becoming store manager.

“This was pretty much I think a big Dollar Tree step,” she said of the remodel.

Dollar Tree merged with Family Dollar in 2015 and is the reason for this remodel, she said.

“There’s completely new shelving inside, all the old is out,” she said. “We do have coolers and freezers now which we didn’t have before, and there’s more Dollar Tree product in the store now.”

The store was closed for five days, reopening Monday.

“We’re still doing some last minute things, some signage, stocking, just got the freezer and cooler product today,” she said.

The Northwestern Consolidated School District Board of Directors elected a new president at its meeting Monday evening.

After his election, President Todd Brandman led the organizing of the board. Steve Steele and Wendy Geralds retained their positions as vice president and secretary.

Brandman then appointed several positions, most of which were filled by the same people as in previous years.

The board also welcomed back Terry Morgan, who has served on the board before. Morgan replaced Vince Sanders, who served as the previous president.

The board approved the meeting calendar, then Superintendent Chris Hoke gave his report.

Hoke suggested two recommendations to hire, which the board approved. Kayla Craft will be a Triton Central Middle School Art teacher, and Gabby Needham will become a “long-term” third grade substitute teacher.

The board also accepted a $5,000 donation from Runnebohm Construction, which the company requested be used to meet student curricula needs. Hoke said it would be used for instruction materials.

“We have a very generous donation from Runnebohm Construction as a part of their annual charitable efforts at the end of the calendar year,” Hoke said. “The stipulation that be applied to student curricular needs as deemed appropriate by the district.”

Lastly, Hoke gave an update on the fieldhouse project. The installation of the floor will be the final part of the project, which is expected to begin Feb. 1.

“It’s pretty close to having substantial completion,” he said. “It looks great. It’s on schedule. It’s on budget.”

The fieldhouse will be operational sometime in March, he added.

Following the regular meeting, the school board held a finance meeting, where they discussed organization and their financial status.

They decided to keep the financial board organization the same as it has been.

“This is the interest that’s earned in our bank account,” she said. “The month of March shut us down, and we’re not getting anything.”

The board saw a $26,000 loss in their interest earned this past year as compared to 2019. This was directly because of COVID.

“I had a brief conversation with Key Bank this morning,” she said. “I had questions about if they knew how long this was going to continue. They really didn’t know how long but they said 2022 is a possibility.”

Hoke said the interest earned is typically figured into the miscellaneous spending category for the district, so the schools will not be affected by the loss.

“It’s not substantial enough to dictate program changes,” Hoke said. “If it were to be years and years in succession, then that starts to add up and become a problem.”

The Education Fund monthly revenue is about the same as every month, but the expenditures are a little bit higher.

“The raises in compensation hit in December so we anticipated that,” Achenbach said. “Our cash balance is healthy and is in line with what was projected for the month of December and actually the end of 2020.”

Hoke gave his first DUAB report – a report implemented by the state Distressed Unit Appeal Board that gives a fiscal indicator of how the county is doing.

The report shows the Average Daily Membership (ADM), which is factored into how much tuition money the school will receive from the state.

“We have an education fund and an operations fund,” Hoke explained. “The revenue largely comes from two different sources: we talk about education, which pays the salary of instructional related personnel, supplies, which is completely state funded and based of ADM. The money is correlated almost 100 percent to the number of students that you have.”

Hoke showed the ADM trend for the schools every year since 2008. The trend is down this year compared to last year, which he attributes to COVID. The current ADM is 1,428. Prior to the downturn, the school saw a steady increase since 2014.

In 2018, the district had a demographic study done, which suggested the district’s population will oscillate around 1,440 students for at least the next 10 years.

For operations funding, the school uses the tax levy.

“What the tax levy is, is the amount of financial support that our board and our district goes out to the public every year and asks for,” Hoke explained. “What you can see is going back to ‘11, our levy was a little erratic at times and we’ve made a conscious effort starting in July of 2015 to try and keep that as low as we can.”

“So a year in which we did a $3-plus-million renovation to the fieldhouse, we were actually able to cut the tax levy by $10,000,” he said. “We’re able to maintain and sustain.”

Hoke summarized the DUAB report as “a good picture.”