It is not all that common for a high school drama department to have a mostly male cast.

But that was the situation Jeff Wilson found himself in earlier this school year – and he knew he needed to find a show that would tailor to that.

Wilson, a teacher at Triton Central High School who runs the drama department, already knew he wanted to do a comedy, given that people were needing a laugh during the COVID-19 pandemic.

He found a perfect fit in “The Odd Couple,” a comedy originally produced on Broadway that has been a film and television show. The show has eight cast members – six boys, two girls – which is exactly what Wilson had in students.

“We kind of had to do a show that size,” he said. “It’s very rare in high school drama to have a lot more guys than girls interested. With only two girls, you’re pretty limited in your script choices.”

The show takes the stage at 7 p.m. today, Nov. 19, at the Triton Central Auditorium. Tickets are $5 at the door.

Another key element in the decision was his knowing that he had two seniors, Logan Buck and Daniel Sanders, who were ready to play leading roles after three years of being actively involved in previous shows.

Both are “very highly functioning autistic young men,” Wilson said, who have significantly grown on stage since their freshman year.

Autistic people have a tendency to easily memorize things, which is helpful when learning a show. But they also don’t tend to show a lot of emotion, something Wilson had to work with them over the years.

“That was a skill that took a lot of time for them to develop over their four years of how to become more expressive,” he said. “This has just really blossomed them.”

Their first two years, the two would stop rehearsal if another character did not say his or her line verbatim, Wilson said. They are now able to adapt and improvise their lines to adjust to what the other character says.

The rest of the cast features Kalub Coulston-Judah as Roy; Lydia Fisher as Cecily; Nick Fisher as Murray; Emma Milholland as Gwendolyn; Jackson Seeger as Speed; and J.P. Trimble as Vinnie.

Half of them had experience on stage before joining the cast.

This is a first-time experience for Trimble and Coulston-Judah, but both have been involved with drama department with doing lights and sound.

“I messed up in the sound booth,” Trimble said, drawing laughs from cast members. “There’s no messing up when you’re out on stage.”

Coulston-Judah said since it was his senior year, he wanted to “go out with a bang.”

The six characters were limited in their availability in rehearsal because all of them were in the marching band, which advanced to semi-state a few weeks ago and competed at the Mid-States Championships in Kentucky earlier this month.

But it actually worked out for Wilson because that allowed him to work more with the two leads. 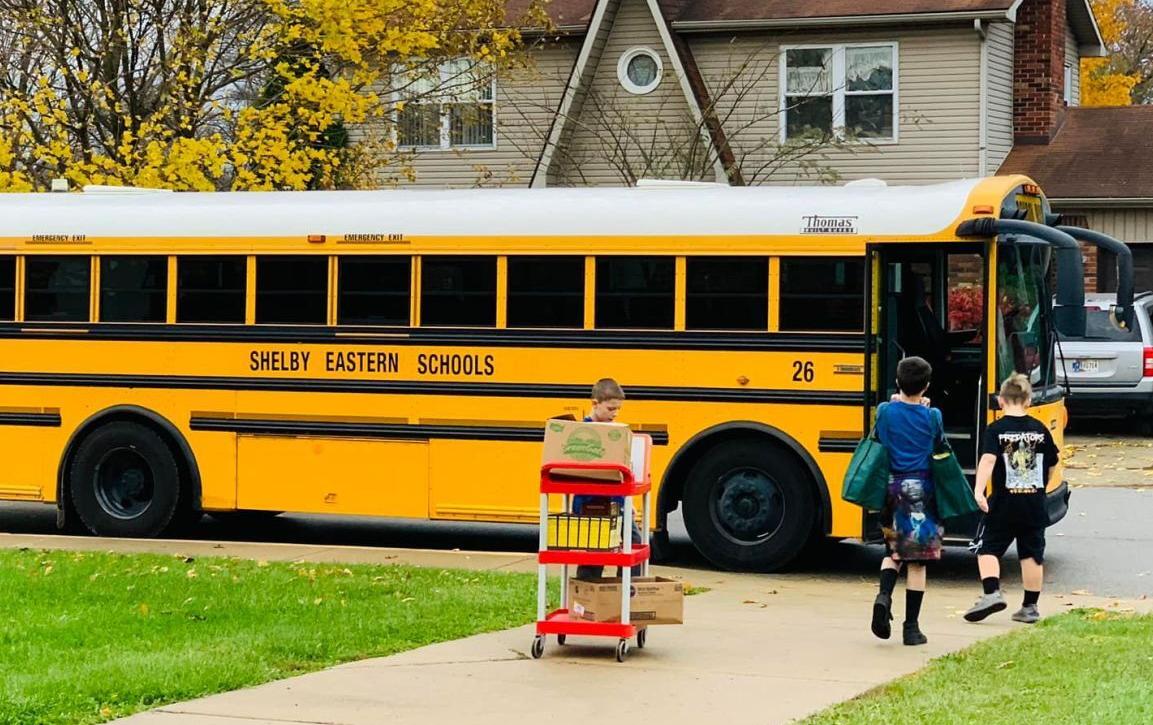 Morristown Yellow Jackets have been stuffing the school bus with donations this week. The “Fill the Bus” Canned Food Drive took place at Morristown Elementary School this year. Donations from Monday, Tuesday, and Wednesday have MES halfway to their goal, according to a Facebook post. Today is the last day to donate.

While the economy may be bouncing back, Thanksgiving travel is not, according to a GasBuddy study.

GasBuddy, a North American online fuel price platform, revealed in its 2021 Annual Thanksgiving Travel Survey that 32 percent of Americans plan to travel for Thanksgiving this year, a decline from 35 percent last year.

In 2019, pre-pandemic, 65 percent of those who participated in the study planned to hit the road for Thanksgiving 2019.

So why such a big decline?

Over half of Americans cite high gas prices for tapping the brakes on travel, according to the study.

The national average price of gasoline is projected to decline to $3.35 per gallon on Thanksgiving Day, still amongst the highest we’ve seen in over seven years, GasBuddy said. But there remains a remote chance that should oil suddenly surge, gas prices could quickly follow and potentially beat 2012’s record for most expensive national average ever for the date: $3.44 per gallon.

As of Thursday morning, a week before the holiday, the price of gasoline at Shelbyville stations was $3.36.

“Similarly to last year, motorists are contending with a rise in Covid cases ahead of the Thanksgiving holiday when many drive to celebrate with friends and family,” said Patrick De Haan, head of petroleum analysis at GasBuddy. “Only this year, we’re also just cents away from the highest Thanksgiving gas prices ever recorded. With global oil demand surging this year as the pandemic has eased, we find ourselves in unfamiliar territory – some of the highest Thanksgiving gas prices on record. Americans are responding to the prices by slamming the car door shut and staying off the road.”

Facebook user Jean Stevenson Reynolds said: “We are having 15 to 20 guest. Daughter-in-law doing most of cooking. Turkey ‘n ham. Yum.”

A couple others said they had plans to travel to nearby places like Columbus, and one said they didn’t have plans at all.

“Who’s got the money? Inflation is ridiculous and you have to be vaccinated,” said user Nena Shelton, reflecting the claims of those who participated in the study.

Seventy-five percent of Americans also say that Covid-19 has had no impact on their holiday plans this year, up substantially from last year’s 46 percent, according to the study. Yet, even less are traveling this year than in 2020. Fifty percent of Americans say they are driving less overall this year, and when asked what it would take for them to drive more, an overwhelming 78 percent said lower gas prices.

Those who are traveling are opting for shorter trips, with most (13 percent) expecting to spend 1-3 hours in the car. When it comes to making a rest stop, decent gas prices remained of most importance to those selecting, though location and convenience rose above the rest stop’s cleanliness in 2021’s results.

The construction on I-74 and SR-44 are still expected to be completed on time, according to an INDOT representative.

COLUMBUS — The Indiana Department of Revenue’s (DOR) Columbus District Office will be closed on Tuesday, Nov. 23 in preparation for the move to a new location closer to other state government offices.

Please note that all state offices will be closed on Nov. 25-26 in observance of the Thanksgiving holiday.

Although all walk-in centers are open for in-person assistance, DOR recommends customers make an appointment for service through appts.dor.in.gov.

Visit dor.in.gov and click on “Contact Us” for more information on DOR district offices, including available services, locations and current COVID-19 safety precautions.

The company made the request during the monthly school board meeting. The school board did not take any action.

Paul Carroll, representing the company, which has been working with the school district on its concerns, spoke to the school board about the project.

He said they were asking to exchange an existing pipe that drains the yield to the south with a co-compliant inlet that would allow for a controlled release of retained water on the Stratford site, which is required by law.

The 73-acre Stratford development site would have a retention pond on the north side of the property. The current site is drained through sub-service drain tiles installed in the field through the dry retention basin being the school district building, Carroll said.

He went onto say the district would benefit because the release of the water would be controlled. It currently drains in an uncontrolled manner.

Davis was asked if there were comparable situations where a preschool was near a dry retention pond in the state.

Carroll said neither of those locations had a fenced in pond.

But Harper said she called both schools and found out that while neither were fenced, they have a fence around the entire school.

Carroll and Harper agreed that both schools said they had geese present with Carroll adding that the geese did not fly onto the playgrounds.

Davis Building Group proposed to build a 6-foot shadowbox fence along the entire northern border of the property and along the western and eastern borders.

“I would prefer not having a retention pond this close to the school that’s 8-feet deep,” Harper said. “But if the board decides to move in this direction, is there a way to extend the fence instead of stopping at the corner and go to Amos Road?”

She then asked about putting a fence around the pond.

The City of Shelbyville’s unified development ordinance prohibits the installation of a fence within a drainage utility easement, which the retention pond would be on, Carroll said, unless the city gives its consent.

He spoke with Plan Director Adam Rude, who said under no uncertain terms would the city allow the fence to surround the pond because of being able to access it for maintenance.