Thank you for reading!

Get access to ALL of our site and our brand new electronic edition!

Not already a subscriber?

If you need to purchase a subscription.
You have permission to edit this page.
Edit

In the midst of COVID-19 precautions, the 2020 Henry County 4-H Fair opened in New Castle this week – with a distinct Shelbyville flavor where the foods categories were concerned.

As they put their hands and heads to work for the overall health of such an important youth activity, it was clear each had a big heart for 4-H.

“I had three daughters who were 10-year 4-H members and very involved,” Nortrup said. “I’ve been involved in 4-H Leaders for more than 15 years. I enjoy working with the youth.”

“For me, it’s the experience and opportunities that 4-H created when I was young and to realize the impact that has on kids at such a young age,” said Pfaff, a 2014 graduate of Triton Central High School. “It’s really important, so any way I can help out to impact young people having a good experience – that’s why I keep coming back.”

While there was a much different atmosphere to the event opening Tuesday, with no crowds or fanfare, the core values of 4-H were still hard at work.

Nortrup said she was impressed to be judging actual food instead of just photos. While the contestant wasn’t there in person to receive feedback, Nortrup and other judges wrote detailed notes on each entry.

For her, judging a baking contest for people who are lactose intolerant was like taking a trip back in time.

“I love it, because this is like a depression-era cake, something you would have seen during the depression because of the lack of milk, eggs and other ingredients,” Nortrup said.

This particular recipe substituted milk and butter with coconut oil and vinegar. The category was just one example of how 4-H continues to change with the times.

“Hoosier Sugar Cream Pie is now one of our state fair categories,” said Northrup, who also serves as the culinary coordinator in the Indiana Arts Building. “Each year I’ve tried to change some categories that maybe weren’t as popular and added some new ones. So it’s exciting to me to start seeing more exhibitors that are younger coming in – and winning.”

Meanwhile, at another food preparation booth, the husband-wife team of Tommy and Elizabeth Pfaff were judging together. Both were 10-year 4-H members, Tommy in Henry County and Elizabeth in Shelby County. Both remember how important those years were to them.

In spite of COVID-19 restrictions, Elizabeth said she was determined to encourage young 4-Hers as much as she could.

“This year is different than what we’re all used to, with COVID-19 going on,” the former Elizabeth Stephens said. “But you know, the heart of 4-H still hasn’t changed. It’s about the opportunities that kids get to sharpen their skills and practice their work ethic and build relationships with folks in the community. So those core values of 4-H are still there. That’s not changed. It just looks a little different now, utilizing social distancing and not having the face-to-face interaction we’re used to having.”

Judging of 4-H projects is currently going on in Shelby County. Watch The Shelbyville News for updates on a virtual 4-H Fair here in the coming days.

Pastor Tony at Evangelical Methodist Church says that over the last three months the congregation’s eyes have been opened to things they take for granted.

On March 18th services were cancelled due to the pandemic.

On April 9th their church steeple was ripped off the building by a gust of wind.

Now, with church services open, and a brand new steeple on top of the building, Pastor Tony is overjoyed.

Getting the steeple replaced required a lot of coordination and time. Amy Mohr from Mohr’s Crane Service and the Steeple People were essential in the process.

“When it was finally put up, it was a big relief,” Pastor Tony said.

The new steeple has a cross on the top of it, unlike the previous one. The cross means a lot to the church.

“The steeple is an indication to glorify God in all things, that’s what our lives should be like as well,” Pastor Tony said.

On Sunday the church will be having a steeple dedication. The topic of the sermon is on neatness being a characteristic of Christ. It is the first gathering the church has had since the pandemic.

“It’s about having things in the right place,” Pastor Tony said. 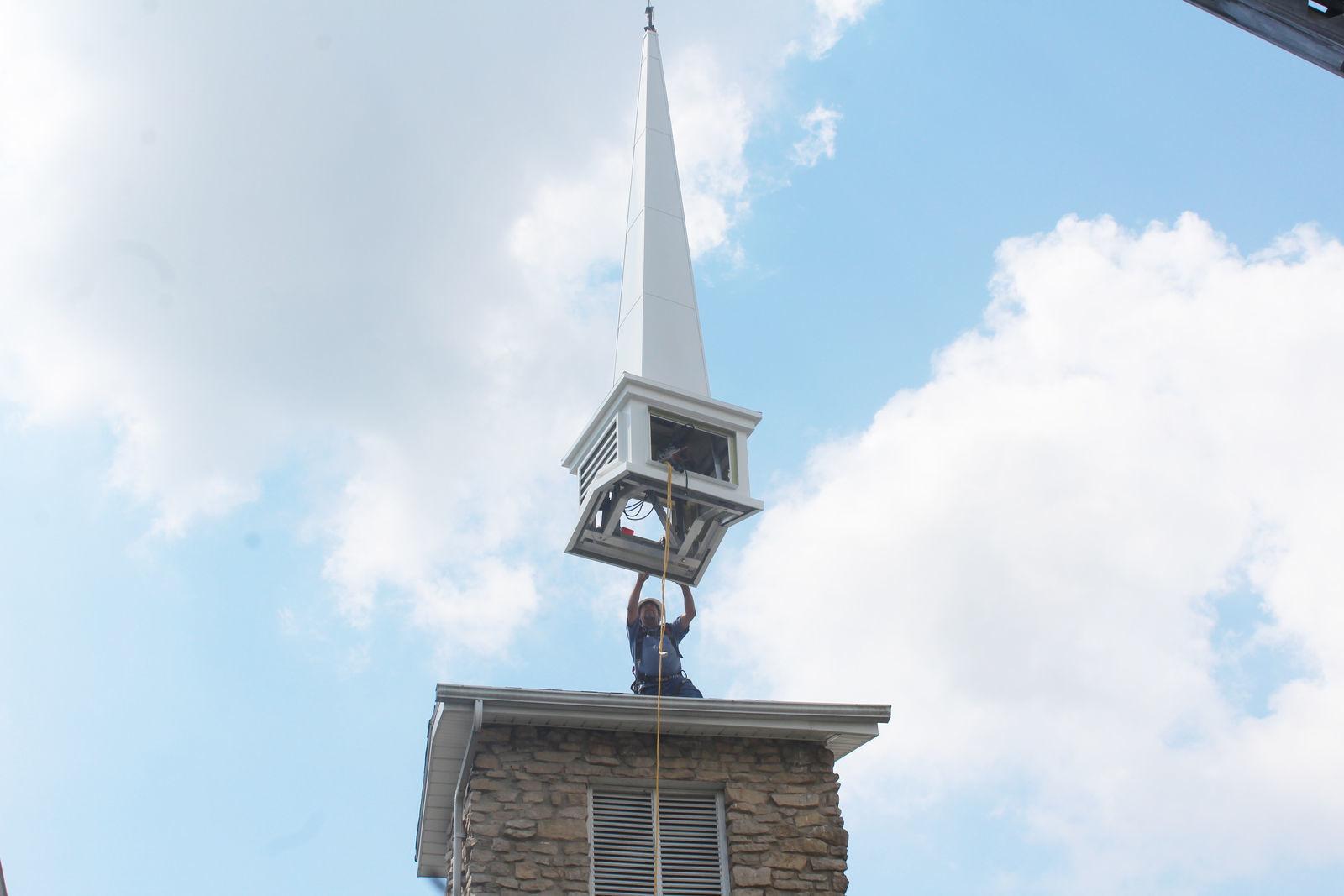 Southwestern Consolidated School District officially has its plans to reopen its doors come Aug. 4 after the board approved new Superintendent Curt Chase’s proposal on Wednesday – and it includes remote learning as an option.

The board approved the plan, which includes the recommendation but not the requirement of students wearing masks, with a 7-0 vote.

“We have guidelines they’re going to follow where the principal will sit down and go through it with them to make sure they understand what remote learning will look like,” he said.

A survey sent out earlier this summer found that 95 percent of respondents wanted their child back in the classroom. But the district deemed it appropriate to still offering remote learning as a possibility for those who aren’t ready to return.

Southwestern is the third district in Shelby County to offer remote learning as an alternative for the 2020-21 school year. Northwestern Consolidated decided against offering it, citing concerns that it would require a lot of planning and studying.

Under Southwestern’s plan, teachers – not students – will switch classrooms at the elementary school.

The survey also found that many parents did not want their child to wear a mask during the school day. A reopening committee determined it was best to leave that decision to the families.

Chase previously said that the district will follow guidelines set forth by the Center for Disease Control.

In other business, Facilities Director Tyler Cooper provided an update on the district’s cleaning policy entering the school year.

Cooper said they finished up cleaning the elementary school on Wednesday, cleaning all of the rooms, stripping floors and re-waxing the cafeteria, and were scheduled to move onto the high school on Thursday.

He said the district previously bought cleaning supplies from a company called Buckeye, which makes its own supplies. When COVID-19 arrived, the district bought more supplies, including a bulk purchase of gloves before the supplier tripled the price, he said.

The district made that purchase knowing it would spend the money on those supplies anyway, and they are expected to last through first semester.

Southwestern’s custodial staff is using 2-3 types of chemicals, all of which are on the Environmental Protection Agency’s emergency pathogen program, he said.

Cooper said teachers will be trained on cleaning protocols in the event that a custodial staff member comes down with the virus. In that case, the entire custodial staff would be shut down for two weeks as a precaution.

“So we want to make sure that teachers are aware of cleaning protocols – how do we clean it, access to the chemicals to make sure they’re getting the right disinfectants, and all that,” he said. “We’re covering as many bases as we can.”

The latest COVID-19 Shelby County numbers showed 434 positive cases, 25 deaths and 4,080 people tested. Indiana as a whole saw 521 new positive cases and seven new deaths. Those numbers bring Indiana’s total to 49,575 total positive cases, 2,546 deaths and 542,292 tested. Just over 9 percent of those tested have had positive results for the coronavirus. Updated information can be found at the Indiana State Department of Health website – www.coronavirus.gov – on your computer.

Consumer fireworks can no longer be used until New Years Eve in Shelbyville.

While fireworks are festive and fun, irresponsible use and overuse can create problems. They can set fire to property, cause distress to animals, and interrupt sleeping schedules for neighbors.

This year, there have been 17 reported complaints since June 29, Shelbyville Police Chief Mark Weidner said. Last year there were nine.

If a resident hears or sees fireworks, they can call the police department to further investigate the situation. If the police can identify who set the fireworks off, they will be required to report to court, he said.