A sign sits along State Road 44 in opposition to the possible solar plant in southwestern Shelby County.

Despite pleas from residents who oppose a possible solar energy plant coming to Shelby County, a moratorium on the solar panel ordinance was not brought to a vote during Tuesday’s County Commissioners meeting.

Commissioner Chris Ross was unable to attend the meeting due to a sudden death in his family. Prior to the meeting, Commissioner Kevin Nigh informed those in attendance, including the other commissioner, Don Parker, that Ross had requested that the discussion scheduled for Tuesday’s meeting be postponed to next week so that he could participate.

Parker decided against the postponement, citing the presence of residents who took the time to attend the meeting.

During a 50-minute presentation and discussion, opponents of the potential solar panels provided detailed information on why they believed introducing the panels to Shelby County would be the wrong decision.

Joel Parker, a 2003 graduate of Southwestern High School and third generation farmer on his family’s farm, and Kyle Barlow, who has been at the front of the group’s efforts to stop the solar panels from arriving, spoke.

Parker cited the reduction in Indiana farm land over the past 80 years, particularly from 1940 to around 1974 due to population and economic growth.

His concern regarded a reduction in food production, specifically in being able to use prime farm land. Of 13 million acres of farm land across Indiana, 11-1/2 is considered prime, he said.

Using non-prime land is not as efficient. Expenses are higher and there is greater environmental impact, he told the commissioners.

Reduced land would also affect the exportation of products, he said.

“The loss of productivity due to conversion of use of prime agricultural land to other uses cannot only affect us, but it affects the world food supply, the stability of that, and the price of the domestic supplies,” he said. “We’re looking at a small area here in Shelby County, but we’ve got to look at the big picture. If this is happening all over the country, where do we stop? What are the criteria we need to look at?”

Barlow expressed concern about what would happen at the end of the solar panels’ life. The life expectancy is around 25 years, which was far less than the 80 years expected for nuclear plants, he said citing an article from the publication Grist.

And he expressed concern about the environmental impact once it broke down.

Parker said he would not make a motion in favor of a moratorium that would allow county government officials the opportunity to look at the three page solar panel ordinance.

He made that motion at the previous Commissioners meeting and it failed to pass. However, he said he would second a motion if it was made by another member.

Nigh decided against making that motion. 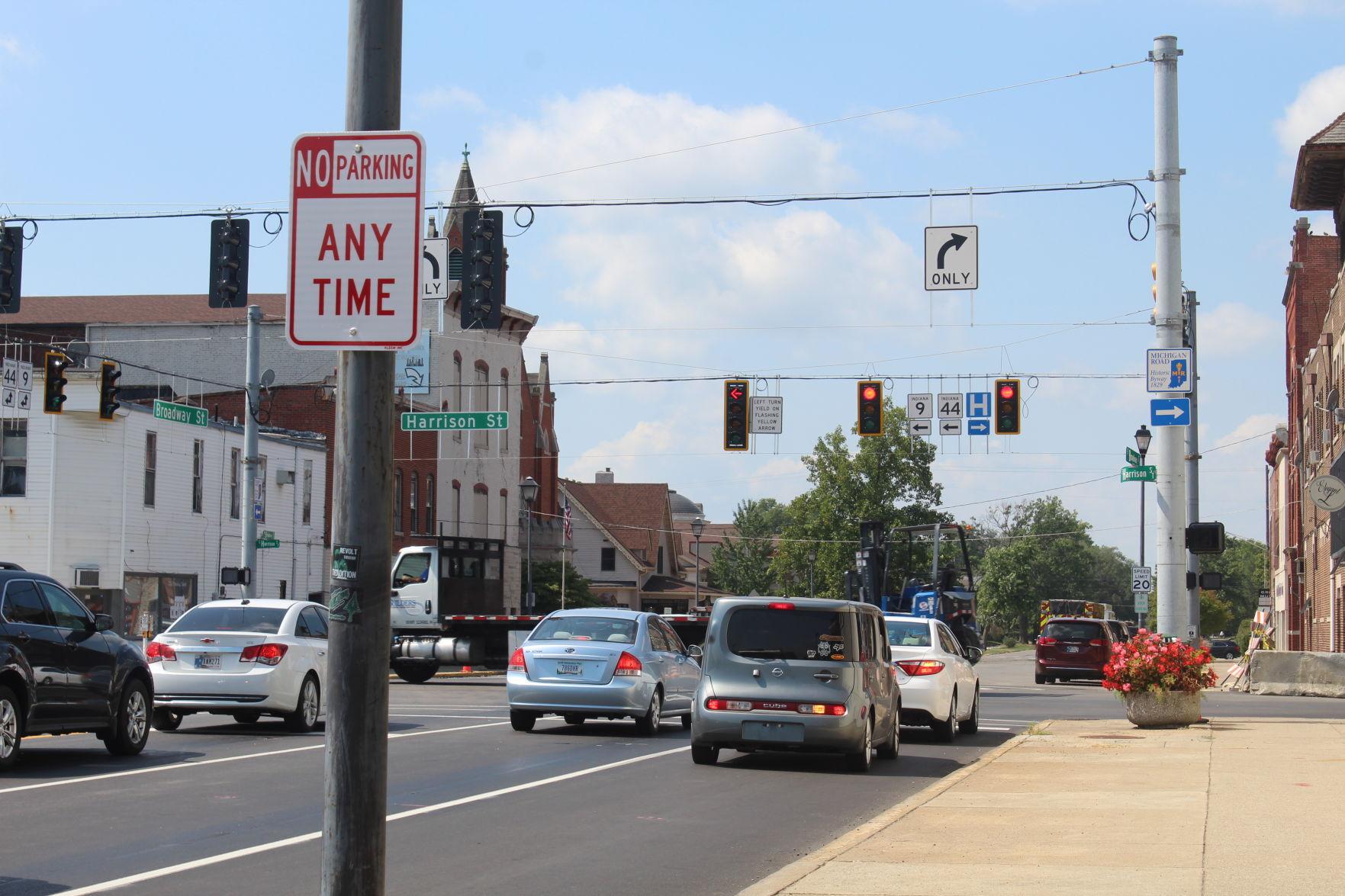 As part of the now-completed construction on Broadway Street between Harrison Street and Noble Street, there is no longer street parking in front of the Chaperral Cafe. The space is now a “Right Turn Only” lane onto North Harrison street.

No parking in front of Chaperral Cafe

Schools look a little different this year, in light of COVID-19.

The practice of social distancing and wearing masks or face shields has become not only an expectation but the norm in local schools. Visitors are not allowed in local schools in an effort to limit exposure as much as possible.

Classrooms are rearranged to keep desks a minimum of 6 feet apart.

And educators and students alike are all pitching in on cleaning at the end of each class.

But while the experience with these additional protocols is creating a unique experience, it hasn’t affected the education taking place, administrators and teachers said.

According to Northwestern Consolidated Superintendent Chris Hoke, the ability to communicate with masks has been a big adjustment, one that teachers have been able to deal with. It is a bit of a challenge to hear one another he said, but the district’s size allow classes to be spread out.

As a second grade teacher, Christine Graham’s students are technically not required, but encouraged, to wear masks.

for Rummage SaleThe First Christian Church of Shelbyville is looking for volunteers for their annual rummage sale on Oct. 2 and 3 at the Shelby County Fairgrounds.

The church is seeking members to help move things from the church and the women’s building to the fairgrounds; set up and tear down the sale; and help sell items. The church is trying to implement more tables so that they can better practice social distancing and keep everyone safe.

“Right now we don’t have enough people to help to actually be able to run it as safely as possible,” said church member Pam Alwardt. “Because I want to make sure everyone is safe to come out for it and no one has any risks of getting sick.”

The church normally does two rummage sales through the Women’s Disciples Group at the church – one in the spring and one in the fall. However, because of COVID-19, the spring sale was cancelled.

If the church can not recruit enough volunteers, they will have to cancel this sale too. The next one will be in the spring.

Anyone who would like to volunteer should reach out to Alwardt at pam@fccshelby.org.

When a company is granted a 10-year tax abatement, they are required to fill out an annual compliance form to update the city on how their business is doing. The common items discussed in the meeting pertained to employee pay and number of employees (which shows company growth).

“It’s basically a way for us to say ‘Are they still hiring people? If not, why?’ Obviously, this year we would know why,” Committee leader Rob Nolley said.

Nolley added that the committee will pull an abatement if the company does not send compliance forms and it has before.

The committee reviewed compliance forms from four companies: Sankyo Seiki Corporation, Brazeway LLC, Toray Resin Company, and PK USA. These forms were submitted by the companies between May and July, after COVID-19 hit.

For the most part, these companies hired more people than they estimated they would at the time the abatement was granted.

Toray Resin Company and PK USA’s employment numbers are down, however they’ve both increased employee pay.

The committee approved all the compliance forms and sent them to be reviewed by the Common Council at its meeting Wednesday evening.

“My philosophy is that I like giving tax abatements,” Nolley said. “In my opinion, it is a way to reward a company that has been loyal to the community. They hire our folks.”