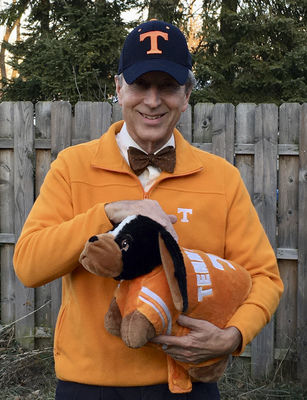 It looks like columnist Meltzer, an IU alumnus and fan, lost a bet with Shelby County resident and No. 1 Tennessee fan, Traci Eggleston. Meltzer is wearing Tennessee Volunteer orange and carrying around Smokey, the Volunteers mascot. How long will he be doing this? He isn’t saying. 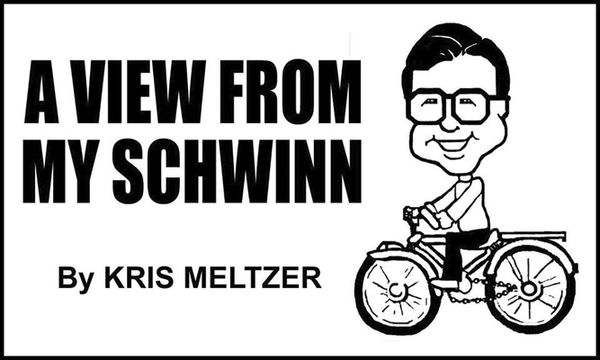 It looks like columnist Meltzer, an IU alumnus and fan, lost a bet with Shelby County resident and No. 1 Tennessee fan, Traci Eggleston. Meltzer is wearing Tennessee Volunteer orange and carrying around Smokey, the Volunteers mascot. How long will he be doing this? He isn’t saying.

This Monday night is the college football national championship game. Football fans will tune in to watch the Clemson Tigers battle the LSU Tigers. I will be watching from the safety of my recliner.

Until last week, the only bowl games I watched were on TV. Last week my wife, Sandy, and I attended the Gator Bowl. I should have left attending games of that magnitude to experienced spectators such as TSN Editor Jeff Brown, but I didn’t. Hopefully, you can learn something from my experience. Enough said. Here is my report. Enjoy.

It all began innocently enough when Sandy suggested that we attend the Gator Bowl. Attending a bowl game seemed like something that should be on every guy’s bucket list. Even though I don’t actually have a bucket list, it sounded like fun, and so we went. Besides it isn’t every year that the Indiana Hoosiers gets invited to a bowl game.

It was originally announced that Kentucky would be IU’s opponent in the Gator Bowl. Later that afternoon, it was announced that there had been a change and IU would be playing Tennessee. Just how the Tennessee Volunteers replaced the Kentucky Wildcats after the announcement had already been made remains somewhat of a mystery. I would learn later to never underestimate Tennessee.

The Gator Bowl is held in Jacksonville, Florida, in the home stadium of the NFL’s Jacksonville Jaguars. As we approached the stadium on game day it was evident that more Tennessee fans had made the trip than IU fans. I was looking forward to meeting some Tennessee fans. Everything I knew about people from Tennessee, I had learned from watching “The Beverly Hillbillies.”

I was temporarily blinded by the sun reflecting off of all the Tennessee orange tents set up in the parking lot. I’m not sure how early the Tennessee fans had arrived, but from their overflowing trash cans and spittoons, I’m guessing about a week.

Despite their wild appearance in their orange-and-white checkered overalls, the Tennessee fans demonstrated a high degree of southern hospitality. They weren’t wearing name tags, so I don’t know if any of them were actually named Jethro, Jed, or Elly May. After having our fill of fried chicken, okra, and pecan pie, we washed it down with sweet tea and moonshine. Soon it was time to head into the stadium.

The University of Tennessee band is called “The Pride of the Southland” and they are known for their “Big Orange Sound.” I’m still not really sure exactly what “Big Orange Sound” is, unless it means that they play their theme song “Rocky Top” constantly. At first I found the song to be a bit annoying, but then I discovered it playing in my head even when the band had quit. The Tennessee team, known as the Volunteers, was lead on to the field by their mascot Smokey, a Bluetick Coonhound.

IU was in the lead and it looked like the Hoosiers were going to win the game. It wasn’t until the 4th quarter when the Volunteers started to catch the Hoosiers. Just when I thought Rocky Top couldn’t get any louder, the Tennessee fans proved me wrong. Over and over they sang,

Home sweet home to me

Tennessee ended up winning the game and a week later I can still hear that song. I would almost welcome a bout of tinnitus if it would help rid me of my current case of earworm. For those of you unfamiliar with the term “earworm,” it refers to a catchy song or tune that runs continuously in your mind. Earworm can include repetunitis or melodymania. I seem to be suffering from a severe case of both.

I seem to be susceptible to catching an earworm. I remember catching my first earworm in 1992. It was a song by Billy Ray Cyrus called “Achy Breaky Hart.” It lasted a couple of weeks.

My worst earworm so far was the summer of 1997 when the song “MMMBop” by Hanson was popular. It played in my head for almost two months. I ended up liking both of those songs. As an IU alumnus and Hoosier fan, I hate to admit it, but I’m starting to like “Rocky Top.”