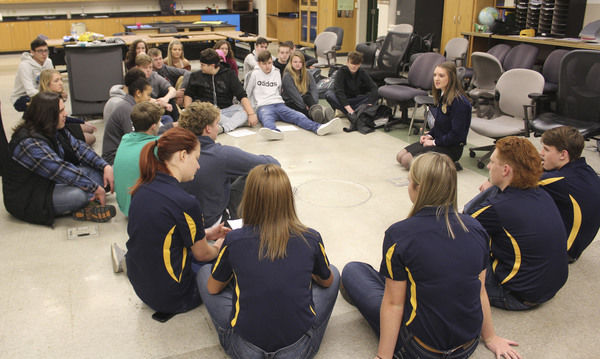 Triton Central FFA students try to draw a self portrait with help from their teammates during an exercise Thursday.

Triton Central FFA students try to draw a self portrait with help from their teammates during an exercise Thursday.

FAIRLAND — Wearing a blindfold, Triton Central High School students attempted to draw self portraits – perhaps with some trepidation because they were using their non-dominant hand Thursday during a training in their Future Farmers of America class.

The students participated in several activities during a leadership workshop led by national FFA officers, who also were high school students.

Triton Central students split into groups of three, and each member took a turn trying to draw a self portrait. The difference between each attempt, however, was that the second and third attempts were made slightly easier by receiving help from their teammates.

“When I came in and said you’ve got to be blindfolded and got to put that pen in that non-dominant hand, a lot of us, in the feelings we were experiencing, they were feelings that we were uncomfortable, and we are not knowing what we are doing,” said FFA National President Tess Seibel, who led the exercise. “But eventually we got to the point where we were able to do this and just do it naturally.”

Around 80 students participated over the course of three workshops.

Each workshop had its own topic – goal setting and decision making; communication skills and the importance of being able to effectively communicate; and organizational skills.

The national officers also led a training for Triton Central’s FFA officers during a prep period.

To the best of his knowledge, this was the first time that Triton Central has been involved with national officers providing a leadership workshop at the school, Josh Schonfeld, Triton Central FFA advisor said.

The national officers were recently inducted and they have been undergoing training at the FFA center, which is located in Indianapolis. As part of that training, the students from around the country are leading workshops in Central Indiana.

Triton Central was asked to participate because the FFA was looking to include a smaller school, Schonfeld said, and the school was within the range that the organization was seeking.

As the third session began, he said he hoped his students would take advantage of the opportunity to have 1-on-1 conversations with the national officers.

“Also, it might spark an interest for them to want to go on and pursue new higher levels with the organization or listening and talking to them might spark a career or a passion from hearing their stories that they then want to pursue themselves,” he said.