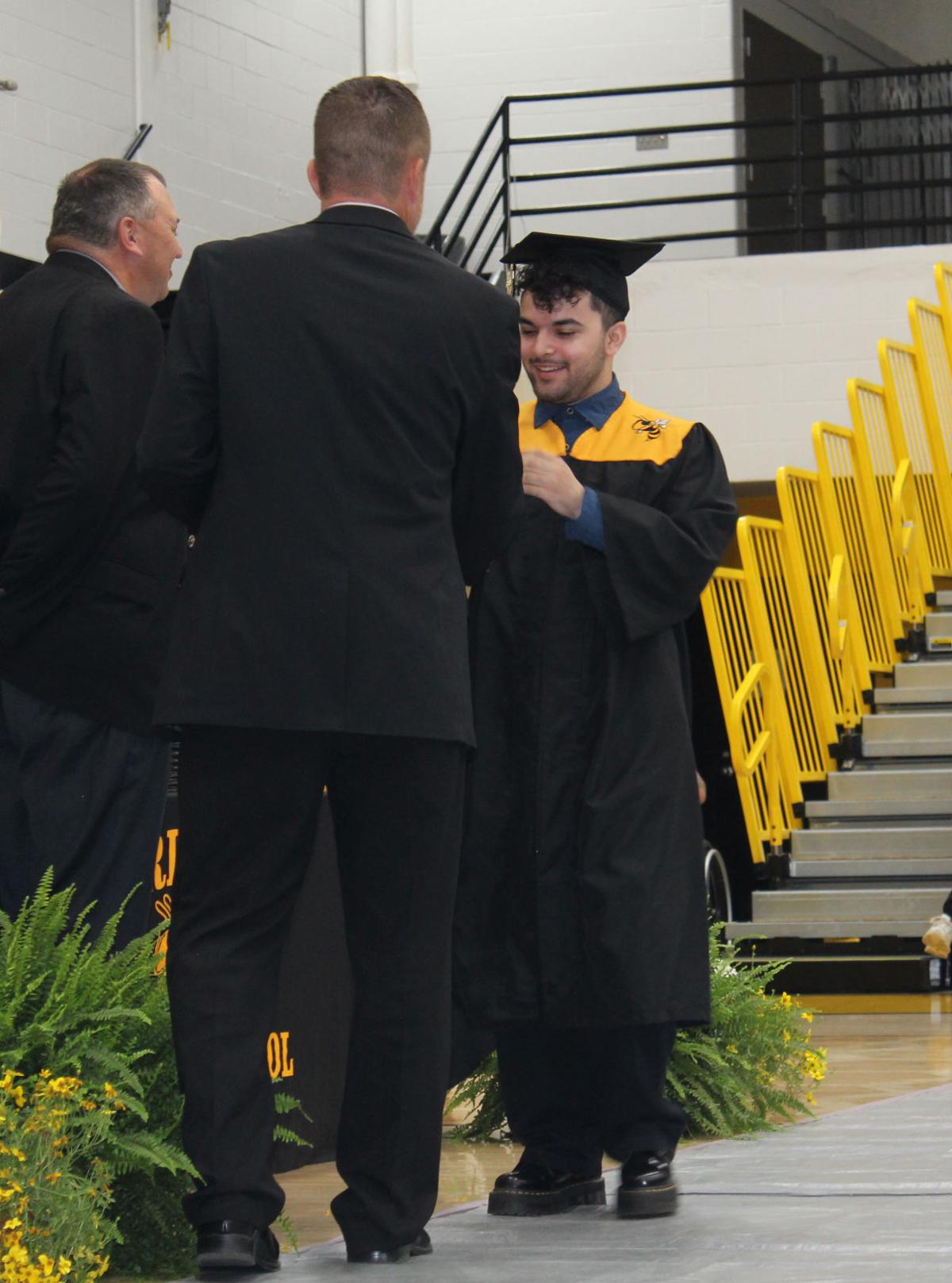 Morristown’s seniors move their tassels over to signify their graduation at the end of commencement. A total of 35 students graduated on Saturday.

Morristown’s seniors move their tassels over to signify their graduation at the end of commencement. A total of 35 students graduated on Saturday.

There was something special about the class of 2021 that tugged at Morristown High School Principal Jeremy Powers’ heart.

In an emotional speech during Saturday’s commencement ceremony, Powers said the small class of 35 students was defined by three words: resiliency, grit and heart.

The class had to constantly adjust to change this school year due to the COVID-19 pandemic, he said.

“Yet not a single one of you gave up, and you were resilient to the very last day of school,” he said.

The class had to show grit in various forms throughout their years at Morristown, but none bigger than their senior year.

They dealt with being quarantined, missing athletic events, academic challenges and going to eLearning.

“Yet you showed strength and character,” he said. “You tackled all the challenges thrown your way this year, and you succeeded.”

And they showed the heart to be the best students they could be this school year.

After the annual senior walk on the last day of the year, he told them that the year was met with “many challenges, and many rewards.”

The class had the “most challenging year any senior class will ever experience,” he said.

“Yet you showed resiliency, grit and heart,” he said. “You didn’t give up. As a result, you were rewarded. I couldn’t be more proud of each and every one of you. You worked extremely hard in what was the most difficult school year we’ve all been a part of.”

Valedictorian Sawyer Jones and salutatorian Rylee Kleine both discussed the challenges they faced during their high school careers outside of the pandemic.

For Jones, it was entering high school not knowing if he would be able to continue doing what he loved – play basketball – because of a genetic heart condition.

“At the age of 13, I learned that my faith had to be greater than the fear I felt,” he said.

Students were challenged over the past year with COVID-19.

Over 180 days of class, they were required to wear masks, which “taught us to smile with our eyes,” he said, and gave them stories they can tell for years to come.

For the most part, they were still able to participate in school activities, including the trip to Kings Island at the end of the year.

That trip produced a life lesson that Jones hoped his classmates took to heart.

Kleine’s challenge was the passing of her uncle.

Her Uncle Dave, who was a senior when she was in kindergarten, passed away at the age of 28 from heart surgery complications.

“I was faced with an immense amount of sorrow and grief and was forced to grow up pretty quickly,” she said. “I saw just how fragile life really is and how it should never be wasted.”

But after his passing, she found what she wanted to do with her life.

Her uncle was co-founder of Hope Center Indy, a nonprofit association outside of New Palestine that helps and houses women coming out of human trafficking. Kleine realized she wanted to become a nonprofit business director and will attend Indiana Wesleyan in pursuit of that goal.

She quoted Picasso in explaining her direction.

That quote encouraged her to choose Indiana Wesleyan.

“I believe each and every one of us has a calling and a purpose and maybe for you, today is the start of that path,” she told her classmates.

The pandemic was also a challenge she said, adding that it felt like “walking on eggshells” each day, fearful of getting a call to the office due to contact tracing or to learn that an event had been canceled.

“I think we can say we’ve made the best out of everything we’ve been given,” she said.