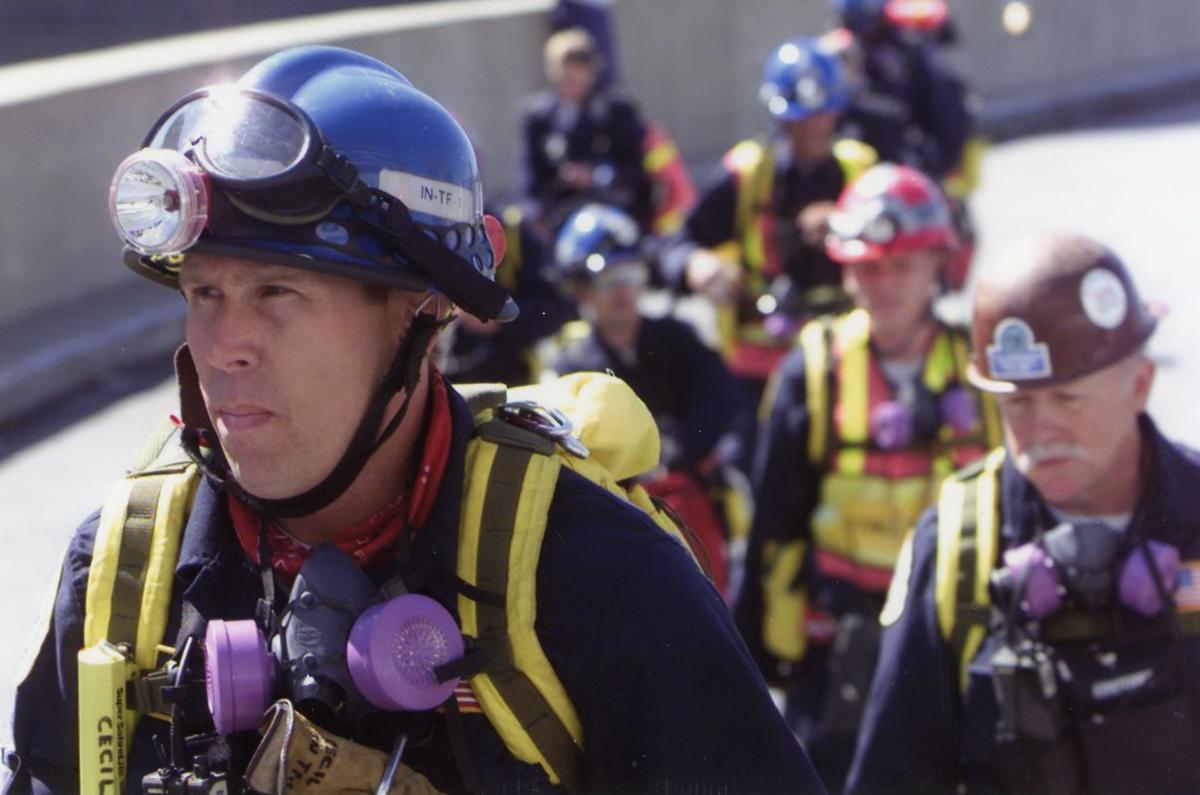 Noel Cecil (left) and Indiana Task Force 1 were called to New York on Sept. 11, 2001, a half-hour after the World Trade Center towers collapsed. 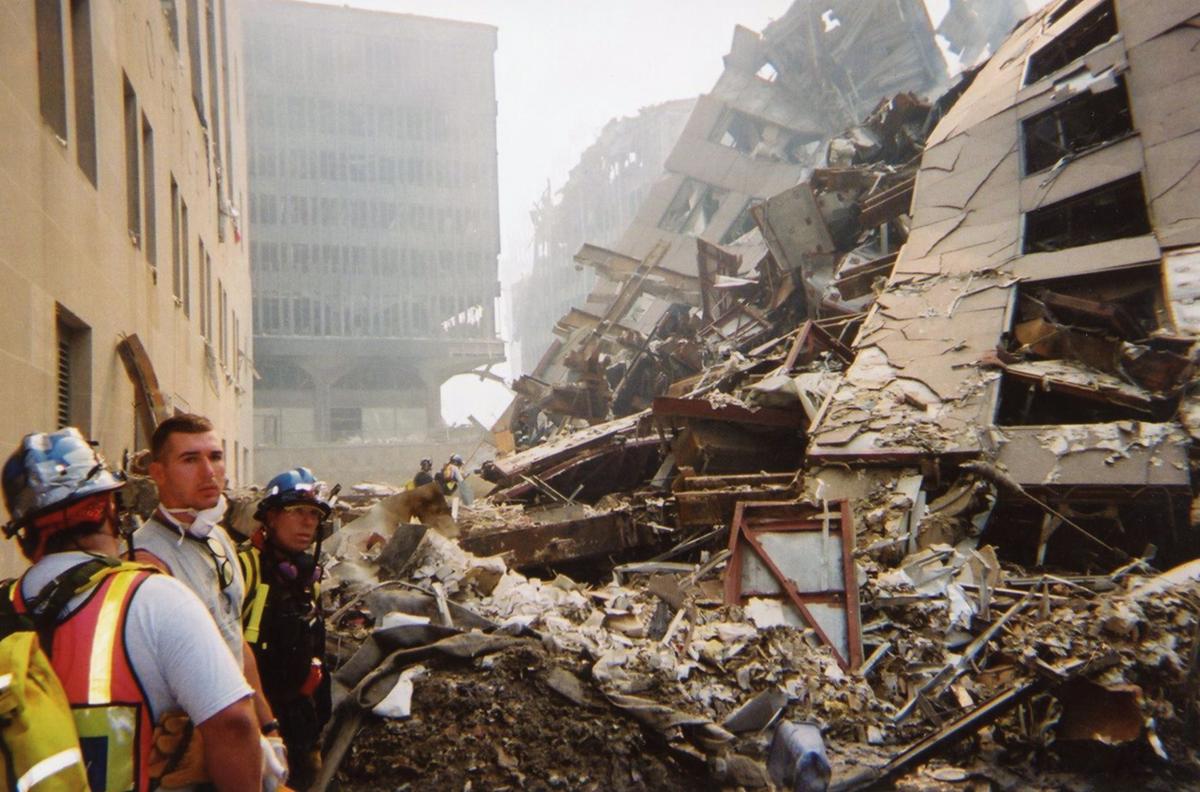 Shelby County resident Noel Cecil served on Indiana Task Force 1, which was called to New York 30 minutes following the second tower’s collapse. This was one of the photos Cecil has in an album of more than 300 photos from his time there. 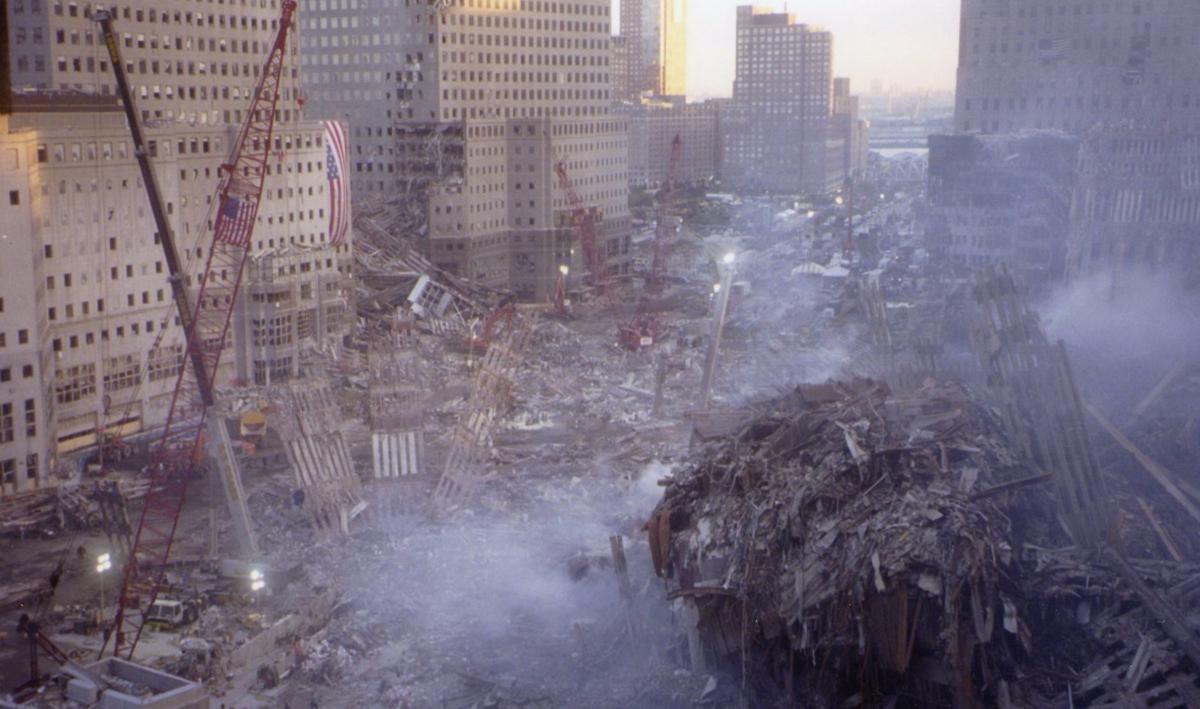 Shelby County resident Noel Cecil served on Indiana Task Force 1, which was called to New York 30 minutes following the second tower’s collapse. This was one of the photos Cecil has in an album of more than 300 photos from his time there.

“It doesn’t feel anywhere near 20 years. It feels like I was just there weeks ago. It’s that fresh. I can remember everything we did and saw, and where we were and the people. The people of New York are great.”

Noel Cecil was serving as an Indianapolis firefighter when he and Indiana Urban Search and Rescue (USAR) Task Force 1 was called to provide aid on Sept. 11, 2001.

“I was upstairs on the second floor,” he said. “We have house duties we do and I was sweeping the floors, and one of our firefighters got on the intercom and said, ‘hey, an airplane just hit the World Trade Center.’ And I thought, ‘eh, a B-25 bomber flew into the Empire State Building back in the ’40s,’ so I didn’t think anything about it.

“I finished what I was doing and I came downstairs, rounded the corner and just as I came in the room, the second plane hit,” the now-Shelby County resident said. “Then I knew something was up. We sat and watched it.”

Cecil’s team, which previously flew out to respond to disasters, had to drive to New York because all planes were grounded.

“We were the only USAR team in the country that had its assets sitting at the airport, and I remember pulling in and we were on the other side of the airport by the state police post, opposite the terminal, and I remember the airport looked like a parking lot,” he said. “There was a tarmac right in front of our building, and there were planes just parked everywhere. They’d grounded all the flights.”

They arrived in New York and were operational by 9 a.m. the following day.

“We drove all night with a police escort at every state line – a different state police department would pick us up and escort us, so we drove straight through,” he said.

When they arrived, the team was set up in the Javits Center, New York City’s convention center.

“We were assigned an area near Tower Two,” he said. “Our operations base was within two blocks of the tower.”

Cecil couldn’t believe how enormous the damage was when he arrived at Ground Zero in New York.

“Sixteen acres were just gone,” he said. “There were still parts of buildings there. The amount of police vehicles, firetrucks that were just destroyed. Cars were all stacked up on top of each other – the City of New York came in really quick and moved things out of the way. They just stacked things where they were so we could get through.”

Because of the way the building collapsed, the rubble Cecil explored was mostly the top floors of the second tower, as well as surrounding buildings.

“I remember thinking ‘what are we going to do with this?’ You’ve got office floors with all this stuff in it, and there could’ve been 10 floors compacted into about 5-10 feet,” he said. “It looks like you cut into the side of a hill, you see all the [layers] in a hill – these are all floors. There was nothing. You couldn’t identify anything. It was just rubble.”

The team was there for 10 days, where they mostly searched the remains in 12-hour shifts.

“I started out working days, then one of our guys got hurt,” Cecil said. “He’d gotten burnt in a methane gas explosion, and there were rumors that part of our team was killed. People back home were losing their minds. Nobody got killed, he just got kind of cooked a little bit.”

Much of the team now has respiratory issues caused by the dust in the air from the time they were there, Cecil said. Some have even died since then, lost to cancer directly related to their service.

“Even when they told us it was safe, there was so much stuff hanging in the air, it looked like a moonscape with a lot of paper,” he said. “There’s a picture of a Subway shop we went by. There were sandwiches in different stages of being made, all just layered with dust.”

Cecil said the team was bussed out from their base to the area they would search every day.

“It wasn’t that far of a drive, but it took forever to get there because of the mass of people,” he said. “It was like driving through a market. People were bringing food for everybody, making sandwiches. People were lined up cheering.

“One of the hard things, when our bus would stop, people would take pictures of those missing and hold them up against our windows,” he added. “That was every day.”

Cecil’s team was tasked with searching the area for survivors and bodies. They were also looking for bits of aircraft, which they were instructed to report to the FBI. His team did not find anyone, dead or alive.

“I never saw a body the entire time I was there,” he said. “I’m sure I was among them, I’m sure they were there, I just couldn’t see them.”

Indiana Task Force 1 thought they would find survivors in the subway system beneath and surrounding Ground Zero, but when they got down there, they didn’t find anyone.

“Things were intact, but they’d been evacuated so we never did find anybody,” he said.

But they did find the passport of one of the terrorists.

“We never really talked about this much until 2019, we got confirmation that what we thought happened actually happened,” he said. “We were ordered to go up on the roof of our building and check for body parts, aircraft debris, anything. And anything we found we were supposed to get ahold of the FBI, which was everywhere.

“I did see a seat cushion and I distinctly remember it saying Wilson Aircraft Manufacturing on it, and aircraft debris,” he said. “We found a passport. ... [One of our dog handlers] noticed a photocopy of a passport just laying in the debris. It was not a U.S. citizen, which perked our interest a little bit. About 10 feet away, the actual passport was laying there. We were afraid to touch it, and we didn’t take pictures of it.”

The next day, there was a report the government found one of the terrorist passports on the roof of a building a few blocks away. Cecil said his team never knew for certain but they had assumed.

The dog handler collected newspaper articles about everything that day but didn’t read them, Cecil said. In 2019, she was going through them and found an article that confirmed it was his team that found that passport.

There were areas the team couldn’t search because it was too hot, Cecil said. He remembers seeing what looked like lava at one point.

“It was night, and I was up on top of the [rubble], we were pretty far out, and I remember seeing a glow coming up out of it,” he said. “I climbed up to it. There was a hole, and when I looked into it I could see down, gosh, 100 feet? 200 feet? I’m not sure how far down I could see into it. At the very down, it looked like if you were looking into a lava tube and seeing the lava flow by. It was just bright orange, and the fire was pretty far away but I could see it as clear as day down there, burning. It just struck me there was so much heat – there were places we couldn’t walk through because there was so much heat.”

But the most dangerous aspect of that time was the amount of people who were in the area. The first couple days after the towers fell, lots of volunteers came to provide aid in any way they could.

When these crowds would panic, people would stampede.

“I don’t know how many times we were evacuated because people were panicking and running,” he said. “After three or four days, they got rid of all the people who’d volunteered to come in so us and the military could get to work.”

Indiana Task Force 1 arrived back in Indianapolis on Sept. 20, 2001. They returned to a large celebration on Monument Circle.

“Every overpass on I-70, there was a firetruck or somebody parked on top,” he said. “Flags everywhere. I kind of miss that now. There was a lot of patriotism after we got back – not for us, but just in general. Flags flying everywhere.”

Cecil left Indiana Task Force 1 in May 2016 and retired from the Indianapolis Fire Department in January 2020. He now works in the emergency room at Columbus Regional Health.

The backstory behind the Medicare Advantage ads

Almost daily a solicitation arrives in my mailbox trying to entice me into buying a Medicare Advantage (MA) plan. Open enrollment is approaching October 15. Advise, an outfit that claims they are health Plan Medicare experts, wants me to “get the most from Medicare.” Another outfit, eHealth …

I sound like a broken record. It seems like every few weeks I’m writing about COVID-19 in one way or another.