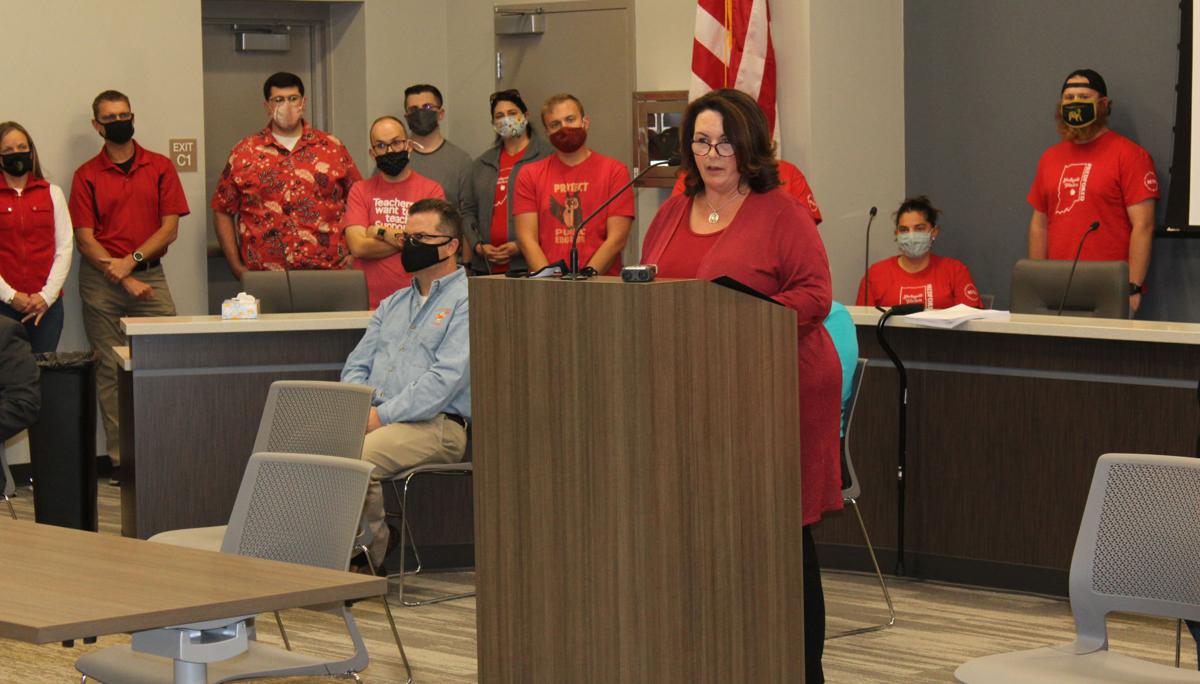 Shelbyville Central Teachers Association President Meredith Hall addresses the school board during its monthly meeting on Tuesday. Hall spoke on behalf of the SCTA in expressing concerns about the current teacher contract negotiations. 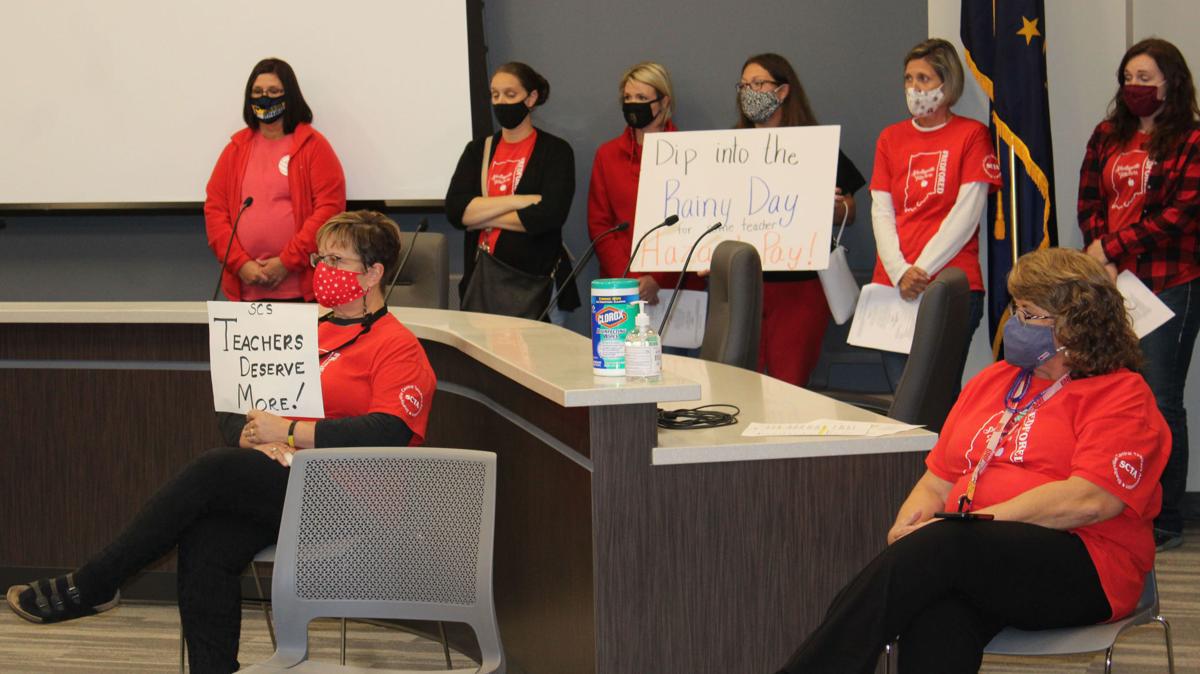 Shelbyville Central Teachers Association President Meredith Hall addresses the school board during its monthly meeting on Tuesday. Hall spoke on behalf of the SCTA in expressing concerns about the current teacher contract negotiations.

Nearly 40 Shelbyville Central teachers appeared before the school board during its monthly meeting Tuesday evening as a sign of unity to express their frustrations and concerns about ongoing contract negotiations.

She said that in the fall of 2019, thousands of teachers from around Indiana gathered on the Indiana Statehouse lawn to fight for better pay, benefits, supplies and buildings.

“We rallied for our families, our students, our community, our school district and for ourselves,” she told the board. “Nearly one year later, we are here to once again rally. We deserve more. We deserve better.”

For the past eight months, Shelbyville Central teachers have gone “above and beyond to provide quality instruction and support for families and students” in response to the COVID-19 pandemic, Hall said, citing the Zoom meetings, discussion boards, late night phone calls with parents, funny pandemic karaoke videos and parades to show they still cared about their students, among other examples.

She noted that teachers spent their summer attending webinars and conferences to prepare for the upcoming school year.

She said that during the current contract negotiations, she was less confident that teachers were appreciated and would be well-compensated. SCTA was being told there would be no increase in base pay, was offered a $500 stipend at the most recent formal bargaining meeting on Oct. 5, which she called “insulting,” and was told to expect a reduction in force.

“Shelbyville teachers are very aware of the economic state of our country, our state and our community,” she said. “We know that enrollment’s down, and school funding is a very serious concern right now.”

Prior to Hall’s comments, Superintendent Mary Harper told the board that Shelbyville Central’s enrollment was down 133 students for various reasons, including some leaving for the Indiana Virtual Academy and others who switched to other Shelby County schools. Harper said she hoped to bring some of those students back next year.

Harper added that both the administration and SCTA agree that there is a potential 15 percent budget cut at the state level. She said in an e-mailed statement on Wednesday that the pandemic derailed last year’s Red for Ed campaign at the statehouse.

In that same statement, Harper added that SCS received $449,365.58 from the CARES grant, helping offset the virtual instruction cost, which totaled more than $278,000.

During the Oct. 5 formal bargaining agreement, SCS offered a 3 percent increase in insurance as well as the $500 stipend.

In 2019 during negotiations, SCS offered to pay teachers to act as substitutes during their prep period, which SCTA declined at the time. During the current negotiations, the teachers association agreed to that offer.

“I think we have some language issues to work out with them but I don’t think that’s a big deal,” Harper told the board. “There were a couple other language issues and again I think it’s something we’ve got to get our heads together, come to an agreement on that. I don’t think we’re that far apart on stipends.”

Hall said on Tuesday that the corporation’s cash balance has grown for the past 10 years, funds that she said are intended for direct student instruction and teacher salaries. As of June 30, the cash balance was at $9,173,139, an increase of $280,420 from 2019.

Hall added that the cash balance in the education fund and rainy day fund equaled 54 percent of the district’s annual income.

“I don’t know many people in our community that have 54 percent of their income in a savings account,” she told the board.

In a worst-case scenario in which the corporation’s funding was cut 15 percent by the state, SCS would still have enough cash reserves to maintain status quo with no reduction in force for two years, she said. There would also be nearly $1 million in the education fund and the rainy day fund would remain untouched.

“The Shelbyville Central Teachers Association has no interest in putting the district in a risky financial position,” she said. “We’re simply asking that a small portion of the funds that should have been spent on our salaries over the last 10 years be used as a stipend to recognize the extraordinary efforts of our teachers during the COVID-19 pandemic.”

Following her comments, board President Gayle Wiley said the board appreciated the efforts that teachers made over the course of the summer.

After the meeting, Wiley said she appreciated the teachers’ attendance and for bringing their concerns to the board’s attention. She also said she would like for them to attend future meetings.

Wiley said she understood where they were coming from, having been on that side of the table before.

“I can sympathize with what they’re saying,” she said. “I know it’s been a tough year for everyone. I have high hopes that we can come to a reasonable agreement.”

In the e-mailed response, Harper said that the two sides were not far apart and she hoped to negotiate an agreement during their next meeting on Oct. 29.

“I am, and always will be, an advocate for our students and educators,” she wrote.

Why my children are getting the COVID-19 vaccine

When facing a vicious infection, there is nothing as effective as a vaccine to protect yourself. We know this from both historic public health victories, like the battle against polio, as well as modern ones, like the Hib and pneumococcal vaccines that have saved 1.45 million children’s live…

Why isn’t the school meal program serving only those in need?

Should the federal government take the hard-earned dollars of American families and use it to give welfare to the middle-class and wealthy?

COVID-19 was America’s blast furnace, but it forged us into something better

Trial by pandemic – that’s how I’ve come to see the past year. COVID-19 challenged my company to continue providing valuable and necessary products to our customers, while adapting, evolving and innovating. I’m proud to say that we, along with our colleagues nationwide, passed the test.