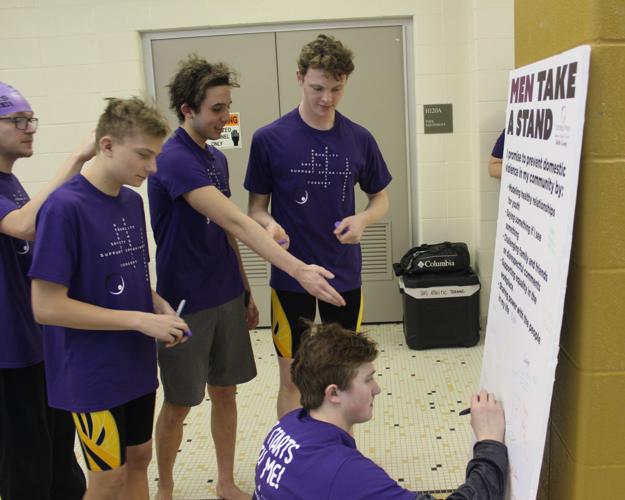 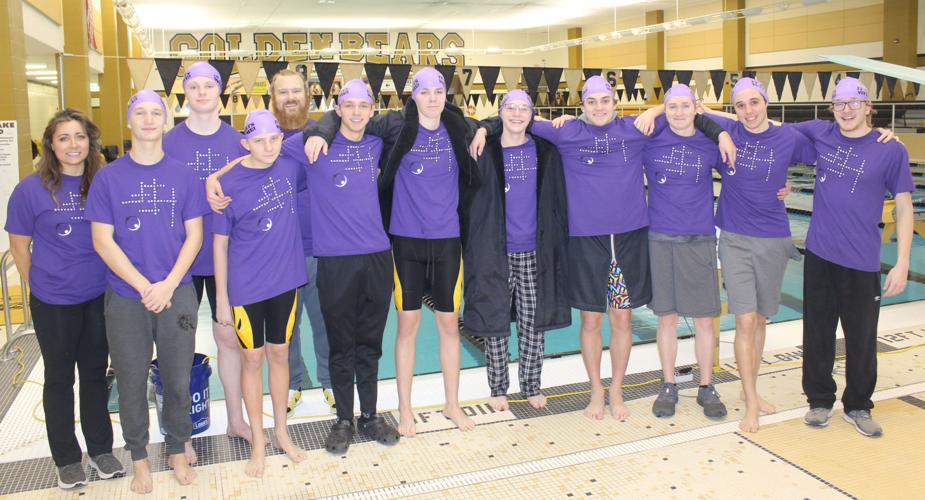 The Shelbyville High School boys’ swim team poses for a photo before its meet with South Putnam on Saturday. The team participated in discussions led by coach Coen Weiler about domestic violence throughout this season, the second program to do so at Shelbyville.

The Shelbyville High School boys’ swim team poses for a photo before its meet with South Putnam on Saturday. The team participated in discussions led by coach Coen Weiler about domestic violence throughout this season, the second program to do so at Shelbyville.

Members of the Shelbyville high School boys’ swim team have been around coach Coen Weiler for years through their association with the swim program.

So when it came time to sit down and have honest conversations about real life issues, there was already a comfort level among the swimmers and their coach.

That helped the team participate in the Coaching Boys Into Men program, which focuses on educating high school students on domestic violence. The team was the second athletics program at Shelbyville to participate, following in the footsteps of the boys’ tennis team, which participated in the fall.

Since this was the second time that Turning Point Domestic Violence Services ran the program, Director Amber Knopp left Weiler in charge of running it.

That’s the goal with other teams participating in the future, Knopp said Saturday morning after a ceremony recognizing the swim team’s completion of the program.

Knopp was pleased with the team’s response. She said a survey found that every member would recommend the program and that they all gained something from it.

The survey found that “it was beneficial to talk to coach about some of these personal issues that they don’t always get to talk about with an adult,” she said.

Weiler said since his swimmers were already comfortable around him – the team is together 3-4 hours a day – there was not much awkwardness in having those conversations.

The program is an opportunity for student-athletes to have honest conversations about domestic violence, an opportunity that members on the team said was helpful.

“It gave us a way to get better as people, not just as swimmers,” Michael Fox said.

Tristin Maloney said that while Turning Point has been to the school before, he felt the conversations were more informative and more one-on-one “so a lot easier to understand and learn.”

With Weiler leading the discussions, he said the program provides guiding questions and bullet point topics that are helpful in steering the team in the right direction.

Knopp said she was hands off the second time around because the program is intended to be run by a coach, someone the athletes know and trust.

“It’s designed to strengthen those relationships with his swimmers and have those conversations with him because they trust and respect him,” she said. “They’ve all been swimming with him for a long time. It’s valuable to have that conversation with that (established) relationship.”

She added that if a coach wants her help in leading discussions in the future, she is happy to give it.

“That’s the goal is to have the coaches actually be implementing the program,” she said. “I’m a resource for them if they have questions or if they need support for any of the topics.”

Fox said the program helped him realize how common domestic violence is.

“It definitely does happen and with this program, helps you realize what you’re seeing,” he said.

Tyler Harker had a similar thought.

“How easily someone without realizing it can be abusive to a significant other in a relationship,” he said when asked what he learned.

Weiler said he wanted the team to participate because of his own experiences.

“I understand the impact that a negative behavior in these instances can create,” he said. “I wanted to in any way shape or form be an ambassador for creating healthy relationships and helping these boys grow into successful men who are productive and respectful in all that they encounter, especially with their partners.”

An important topic they covered was having respect for others and communication, he said.

They discussed the importance of being open and communicating expectations, particularly being able to communicate before an issue grows into something bigger.

Weiler plans to have his team participate again next season, creating an opportunity for current members to have deeper conversations while introducing new swimmers to the topic.

Turning Point is turning its attention toward the baseball team next.

That team will participate during its upcoming season, Knopp said. Coach Royce Carlton will be going through the training before the season begins.

Along those lines, Knopp said she intends to reach out to all four county athletic directors to gauge interest in a training over the summer. The training would be an opportunity for coaches at the four county schools to learn how to lead conversations with their own teams using the program’s resources.

Harker, Maloney and Fox each gave some advice to members of Shelbyville’s baseball team on what to expect this spring.

Maloney said a large part of the experience requires participating.

“You need to be open with your team and yourself and be willing to discuss uncommon topics and maybe uncomfortable topics,” he said.

Fox encouraged the baseball team to listen to each other and be respectful.

It always interests me to hear people say, “I believe in the basic goodness of human beings.” In their view, people are born “good,” but become corrupted by the evil influences in the world. But this idea is both naïve and unbiblical. What evidence is there that people are “born good?” There…

I am always looking for new and different recipes. I am also always researching and keeping my eye out for recipes that take a quick shortcut that I can share with some of my more, inexperienced, readers. I also create my recipes based around not just the flavor or the presentation of the fi…

Do you keep a diary? Or, the more grown-up version, a journal? Have you considered keeping one about your gardens? Keeping notes from year to year about your plants, the weather, and other information can help you in future planning.