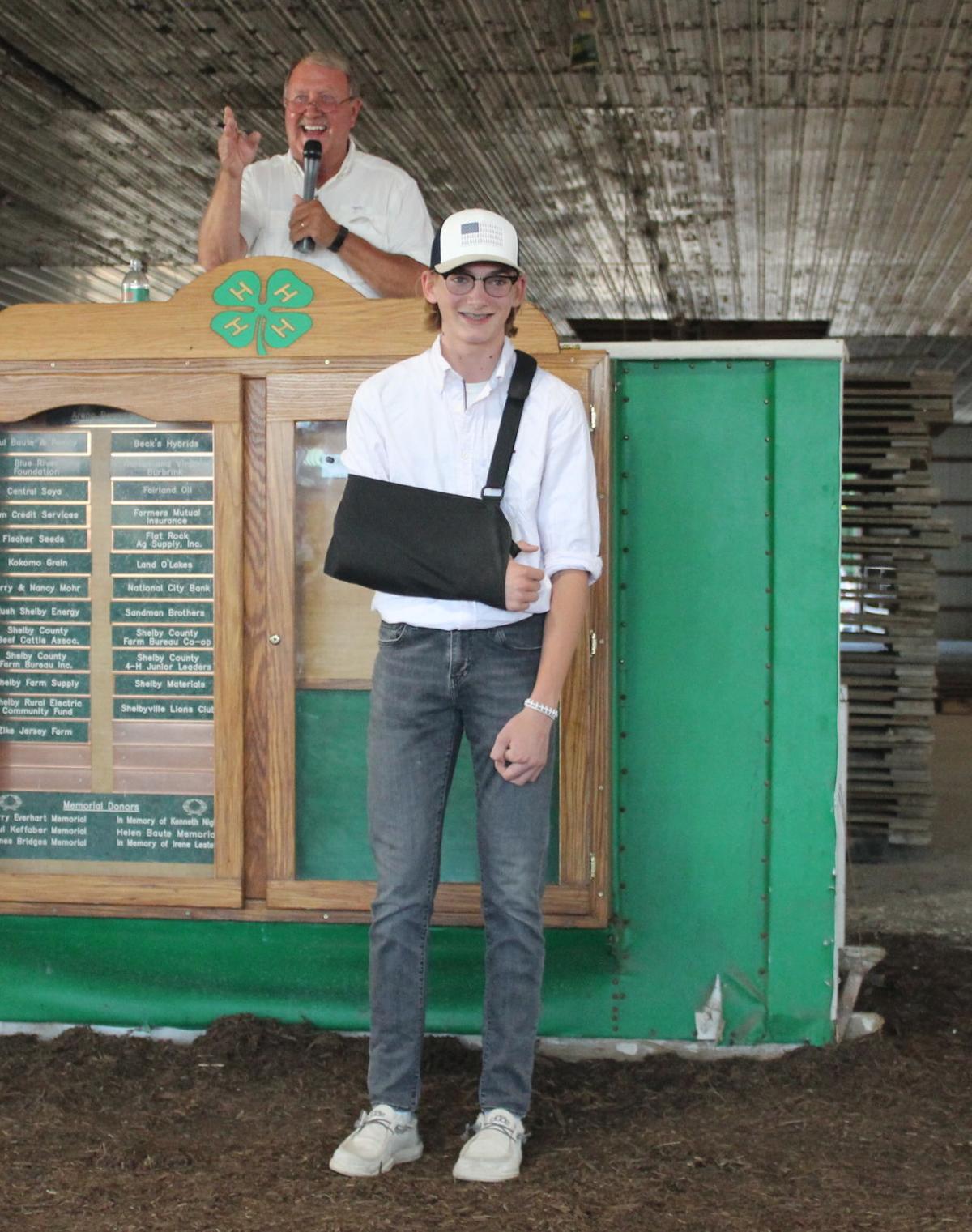 LEFT: Brock Kuhn smiles as bids go up during the market hog auction. His hog sold for $750. 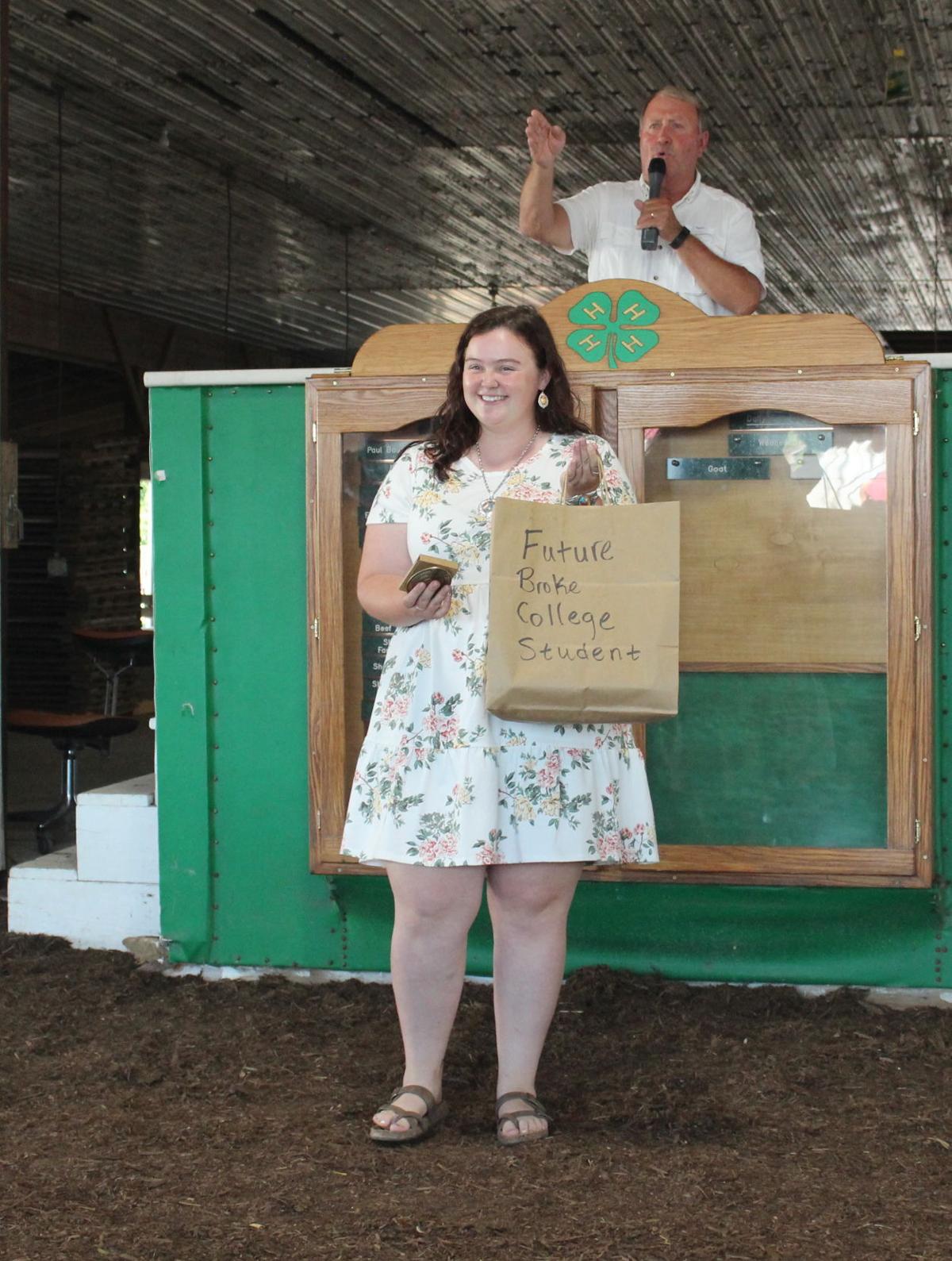 Ten-year 4-H member Hannah Everhart holds up a bag that reads “future broke college student” during the beef auction. The winning bid was $500.

LEFT: Brock Kuhn smiles as bids go up during the market hog auction. His hog sold for $750.

Ten-year 4-H member Hannah Everhart holds up a bag that reads “future broke college student” during the beef auction. The winning bid was $500.

A year removed from making the best of a difficult situation, there were a lot of 4-H members with big grins on their faces Thursday evening.

Standing in front of a big crowd as auctioneer Kevin Nigh tried to entice participants to increase their bid, children eagerly but happily waited to find out how much their livestock sold for during the Shelby County Fair livestock auction.

Nigh later admitted that it was good to “get back a little bit of normalcy” in having the auction in person.

A year ago, the 4-H’ers didn’t have that opportunity.

With the county fair canceled due to the COVID-19 pandemic, the auction was done virtually.

Scott Gabbard, educator and county extension director, said first and foremost he was grateful to the buyers participated in last year’s auction under unusual circumstances.

Some of them were unfamiliar with the technology and so there were a few practice sessions prior to the auction.

“The companies met us where they could,” he said. “We were just thankful just to be able to do it, period, last year as best as can be.”

With everyone adjusting to being able to be back at the fair, not to mention the fair moving up this summer, Gabbard was thrilled to be back.

“I absolutely missed this,” he said. “I work with these kids, I get to see them grow up.”

Gabbard sees the long-term benefits of children participating, not only in the auction but with their livestock and projects in general.

Participants gain skills that they will use further down the road at future jobs without even realizing it, he said.

“They have no idea when they sign up to show a goat or a sheep, really what that means on the back end, weeks and months out,” he said. “That’s what I like. For some people, it’s about the ribbon. To me, it’s all that other stuff that makes them good adults moving forward.”

4-H’ers saw their hard work pay off at the auction.

Several livestock sold for $1,000 or more, with the largest bid of the evening coming in at $1,600 for a goat exhibited by Ella Koch.

US can build and fight climate change at same time

As part of efforts to pay for President Joe Biden’s proposed $3.5 trillion spending plan and ahead of a burst in expected infrastructure outlays, Senate Democrats are proposing the U.S. impose tariffs on carbon-intensive imports. This idea resembles the European Union’s newly unveiled border…

When Simone Biles withdrew from the Olympic women’s gymnastics team final last week because of her mental health, I couldn’t help but think of another Olympian – Canadian sports legend Hayley Wickenheiser – and what happens when culture tries to eat champions for breakfast.

Why are so many Republicans refusing vaccination? Because Russia is telling them to

What is the difference between doubt and distrust? Doubt can be overcome by evidence. Distrust cannot.