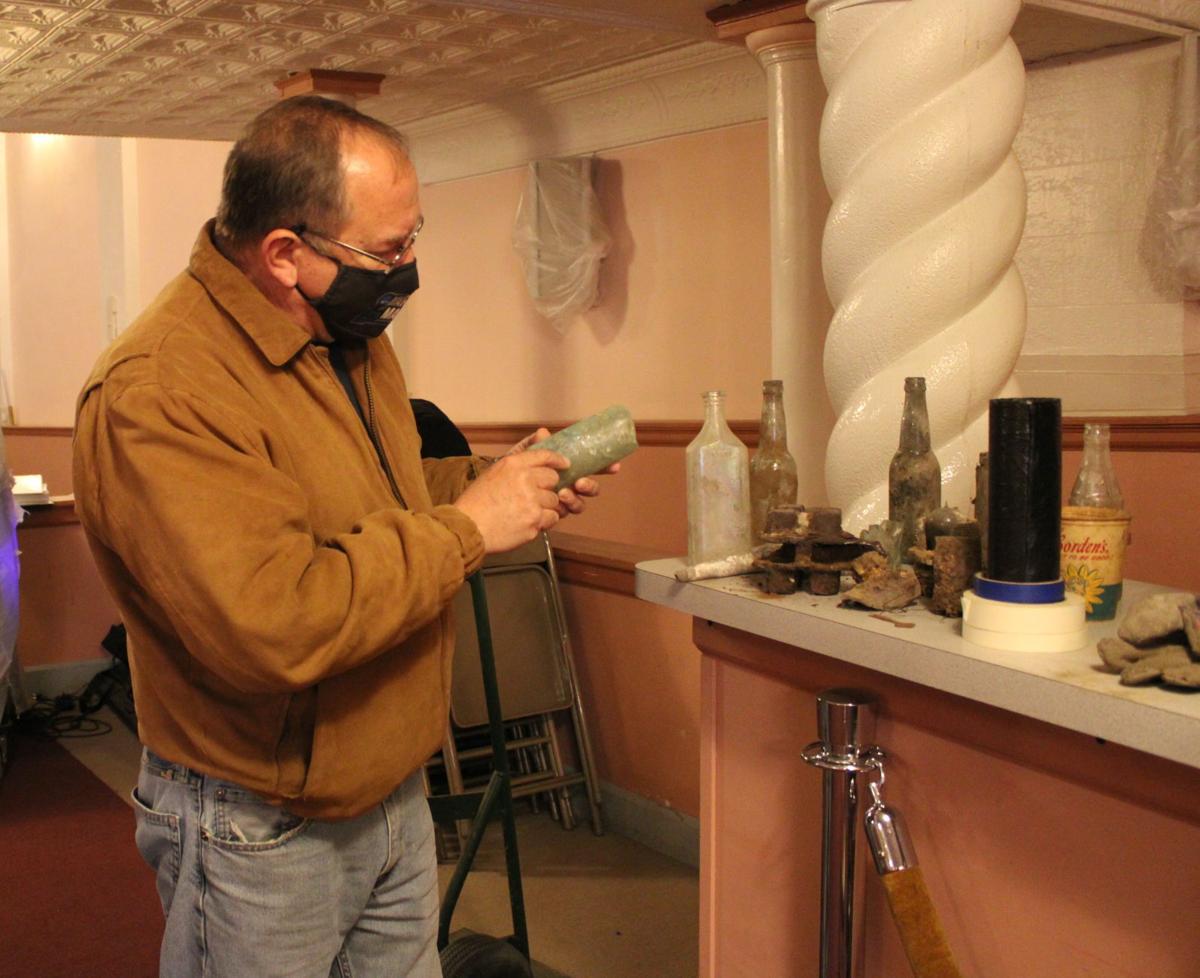 Strand Theatre Manager David Finkel shows off the “knick knacks” he and his volunteers uncovered while leveling out the stage. Some of these items include very old coca-cola bottles and even part of an organ pipe. 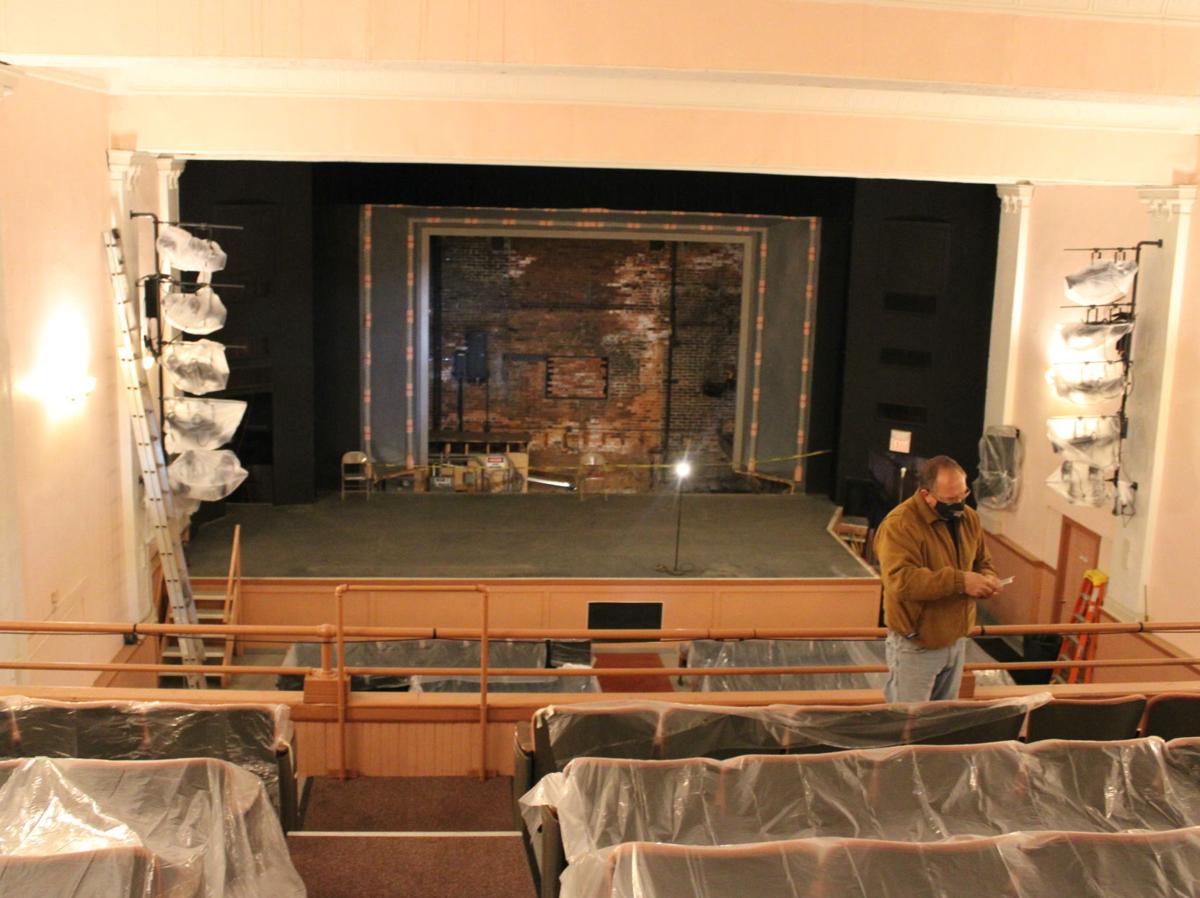 The Strand Theatre is undergoing a stage leveling project. The back part of the stage (upstage, as thespians call it) is completely dug out and ready for concrete, which will be laid this week – hence the plastic-covered seats.

Strand Theatre Manager David Finkel shows off the “knick knacks” he and his volunteers uncovered while leveling out the stage. Some of these items include very old coca-cola bottles and even part of an organ pipe.

The Strand Theatre is undergoing a stage leveling project. The back part of the stage (upstage, as thespians call it) is completely dug out and ready for concrete, which will be laid this week – hence the plastic-covered seats.

Plastic bags covered the 369 seats of the still-dark Strand Theatre as its all-volunteer staff prepare for the laying and cutting of concrete under the stage – the next step in the leveling of the stage project, which commenced in the midst of the pandemic and is nearing its completion.

“We’re getting ready to kick up some dust,” Business Manager David Finkel said. “Just because we have not had anything doesn’t mean that we’re not doing anything. We’ve worked solidly – you’ll notice we’re missing a stage.

“We could have done it much quicker, but we don’t have anything else to do so we didn’t have to,” Finkel continued. “And that is the leveling out of the stage floor and the building of new dressing rooms.”

Prior to the project, the stage had a 1916 Vaudevillian Stage – there was a 12-inch height different from downstage to upstage (or the back to the front, from the audience’s point of view). There was also an 8-and-a-half-inch step in the middle of the stage.

“At the same time since we’ve exposed underneath the stage, we’ve cleaned it out, we will expand our dressing room, and we will put in another set of stairs so it will have two places of egress,” Finkel said.

This will “more importantly” provide a crossover, allowing the actors to enter from stage left and stage right.

“Currently, we can only make our entrances from stage right from the dressing room,” Finkel said. “If you want to make a stage left entrance, you have to go out the back door, across the alley, in the other back door and onto the stage, stage right.”

But the most exciting thing, Finkel said, is the stage will be accessible by people who are physically impaired.

“If you are in a wheelchair, you will be able to get on our stage,” he said.

Throughout this process, volunteers have uncovered some very curious items from the dirt under the stage. One area had been blocked off by a wall, so it hadn’t been exposed in about 80 years.

“We took a crane and stuck it in that door, and oh my –” Finkel said. “She’s a lunatic getting that stuff out. But we got it out, and now it’s as clear as can be. I’ll show you some of the junk we found.”

Volunteers uncovered very old coca-cola bottles and even a section of organ pipe from the dirt.

“How did any of this stuff get under the stage?” Finkel said. “People just threw them away. It was just trash.”

Some of these “knick-knacks,” as Finkel called them, will remain at the Strand. Others will be sent off to the Grover Museum for preservation.

In addition to the stage project, the Strand also received a new server and new audio equipment.

The theater’s last performance was March 8, 2020. This has posed quite a challenge for the theater: financially, in terms of booking events, and volunteer-wise.

“As we are approaching the homestretch before we can consider opening, it is the hardest financial times we’ve ever been in,” Finkel said.

Because the theater is run by volunteers, it was not eligible for any COVID relief grants. It has received “generous” donations, Finkel said, including a $5,000 from Indiana Grand last fall.

With COVID still being around, the theater volunteers are still unsure if they can book events, or have the events they booked.

“We earn our funds through ticket revenue,” Finkel said. “If you cannot sell the tickets, you cannot survive. Will we be able to? We don’t know. We certainly have the opportunity to book, in a more hurried fashion, some really quality entertainment. But it is a financial gamble for the artist and for the theater. Those are the two things that have to come together for any performance to work.”

In addition to the lack of income, the Strand volunteers have broken the habit of coming to the theater every week.

“We have broken the habit of coming to the Strand and we have broken the habit of volunteering,” Finkel said. “We don’t know what kind of volunteers we’ll get. We had an unbelievably excellent cache of dedicated community people who kept this place going 150 performances a year. Between not having them, between losing some of our key volunteers to COVID – you know, Gordon [Hood], who did all our sound, died of COVID. We have him on the marquee.”

Finkel also said they want to make sure the audience is comfortable enough attending events in person.

And attending the theater is an experience of its own – so much so, that Finkel prefers not to livestream events. Why? It would break a habit.

Of course, they’ll stream a lecture, or something Finkel says is “appropriate” to stream. But the theater has to open first.

“Until the uncertainty is out of it, we cannot safely book entertainment for the future; however, we have every intention of absolutely being up and running in February of 2022,” Finkel said.

That said, the Strand hopes to be open for a community event on June 10. Finkel also said he was looking at booking local talent for some small events. The stage will be completed “well before that,” Finkel said.

“I am going to be booking some concerts through the end of June and beginning of July,” Finkel said. “I don’t think we’ll really have anything more than three or four things a month. A normal month for us is 16 things.”

With these limitations, and holding onto hope, the Strand looks to the future.

When Ann Jarvis died on May 9, 1905, her daughter, Anna Reeves Jarvis, began a campaign to honor her mother as a way of celebrating all moms as a group.

Eye on the Pie: What they don’t tell us

Want to end the pandemic? Pay people to get vaccinated

When I received my first dose of Pfizer’s COVID-19 vaccine last December, nobody paid me to roll up my sleeve. Yet, as vaccination efforts approach an expected tipping point, at which the amount of available vaccine exceeds the number of willing recipients, with the rate of vaccination far b…