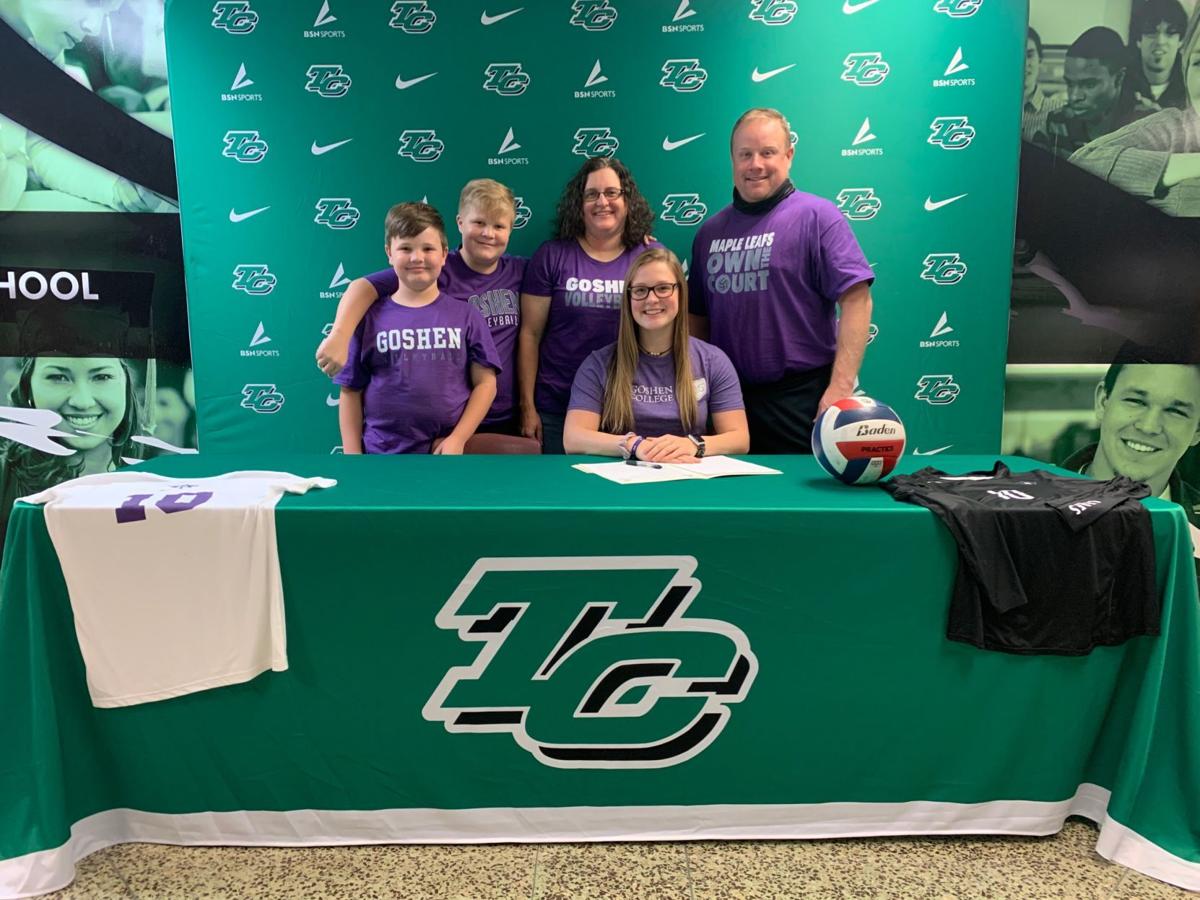 Maddy Beaver poses for a photo with her family after signing to play volleyball at Goshen College on Thursday. The Triton Central senior will have the opportunity to play right away for the Maple Leafs, according to Goshen coach Kourtney Crawford. 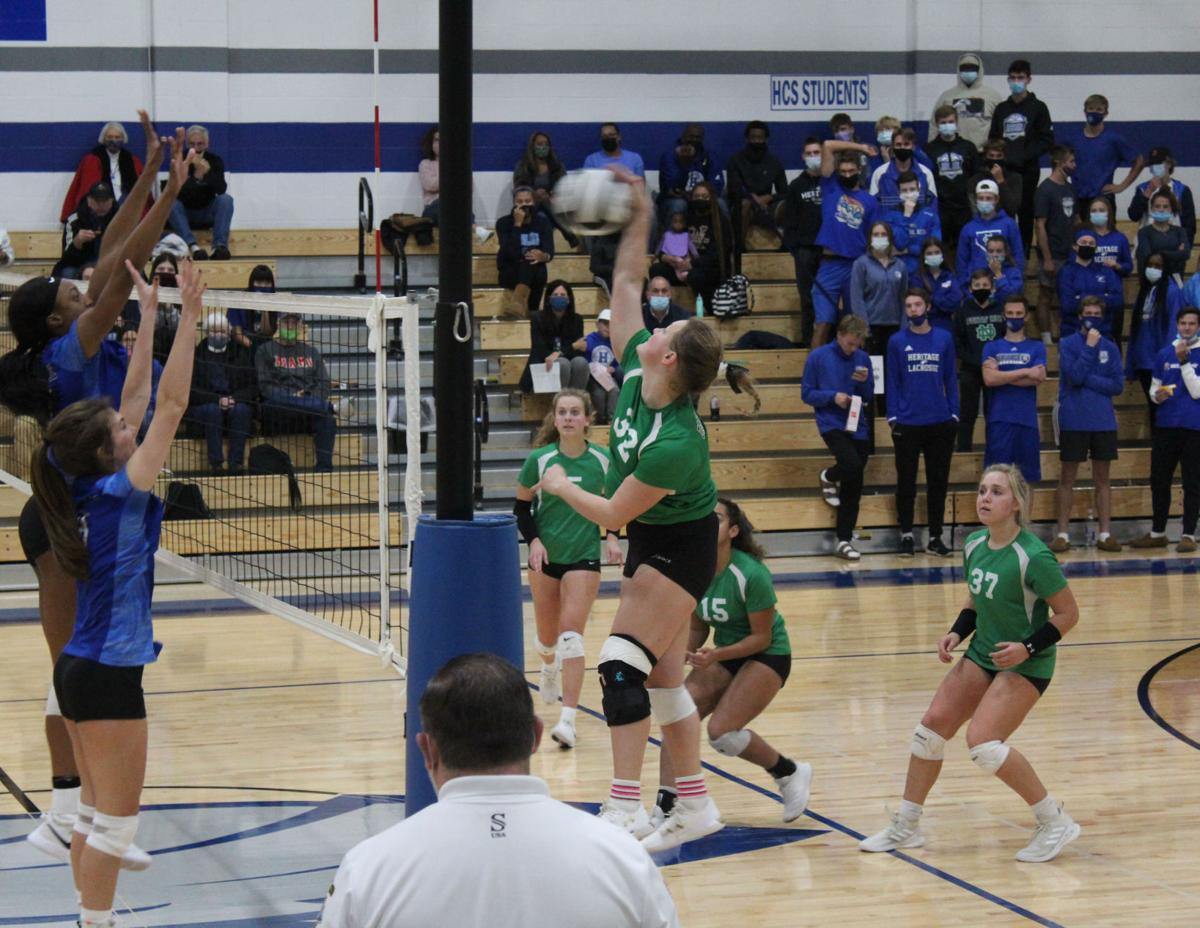 Maddy Beaver attacks the net during the regional final at Heritage Christian.

Maddy Beaver poses for a photo with her family after signing to play volleyball at Goshen College on Thursday. The Triton Central senior will have the opportunity to play right away for the Maple Leafs, according to Goshen coach Kourtney Crawford.

Maddy Beaver attacks the net during the regional final at Heritage Christian.

The positive vibes were mutual.

Despite not being able to meet with her in person because she was in quarantine, coach Kourtney Crawford had a good feeling about Beaver after her first meeting, which took place on Zoom.

Beaver will be playing volleyball next year at Goshen after signing with the Maple Leafs on Thursday following a successful career with the Tigers.

“Just being a really good person is super important to me,” Crawford said on Thursday. “I can teach you all the ins and outs of volleyball, but it’s either you’re going to be a good person or not so Maddy is going to fit very well into our program.”

The two were unable to meet in person on that first visit – and in fact, had not met each other in person until Thursday. But through long conversations over Zoom, phone calls and text messages, Crawford knows she is getting the type of person she looks for to play in her program.

And she anticipates Beaver factoring into the lineup as soon as she steps back on campus next fall.

Crawford said if she were to make a lineup now, Beaver would probably be one of her starting middles because of her quickness and determination.

The Maple Leafs lost one of their starters to graduation and will be looking to fill that spot.

“From talking to Maddy and seeing her film and knowing her dedication to the game, I definitely see her being in the lineup right away,” Crawford said.

Beaver said from the moment she walked onto campus, she felt at home. The people were friendly and welcoming, and she loved the programs the school offers.

“It just felt perfect for me,” she said.

With initial plans to study social work with the possibility of minoring in either pre-law or psychology, Beaver said she is interested in working in a school system while coaching volleyball. Or, if she goes down the pre-law route, she might become a child advocate lawyer.

Triton Central coach Ray Basile said he was excited for Beaver, both for the culture that she is about to experience and the opportunity on the volleyball court.

He anticipated her fitting well into that family culture because of her time at Triton Central.

With Goshen three hours away, he said he looks forward to seeing her play at the next level.

“I look at her as a finished product for me,” he said. “Now she starts all over again so I’m excited to see that.”

During her time playing for the Tigers, Beaver was a member of two sectional championship teams. As a senior, she led the team in kills (251) and blocks (37), and was fourth in assists (33). She also helped Triton Central advance to the regional final.

“My team is full of legacy makers,” Beaver said, adding they had been playing together since the seventh grade. “That’s just us. We just push ourselves until we meet that next level, so we couldn’t do it without each other.”

When did it all start? Who can say? Not I. My earliest recollection was a sugary breakfast cereal for children advertising the radio broadcasts of the Brooklyn Dodgers. Up to that time, Gem razors and Shaefer beer, along with Abe Stark’s clothing store, were acceptable commercial elements in…

As bizarre as it may seem, last year’s presidential election provided us with a bona fide highlight.