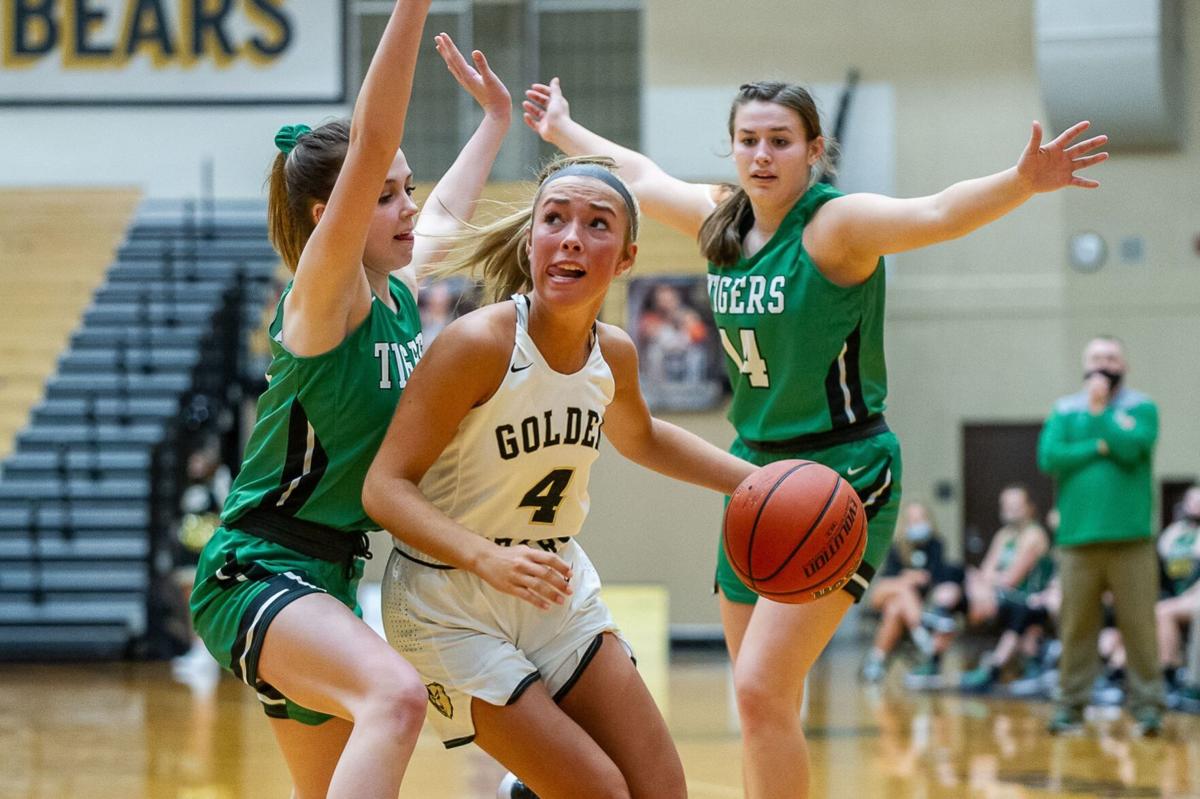 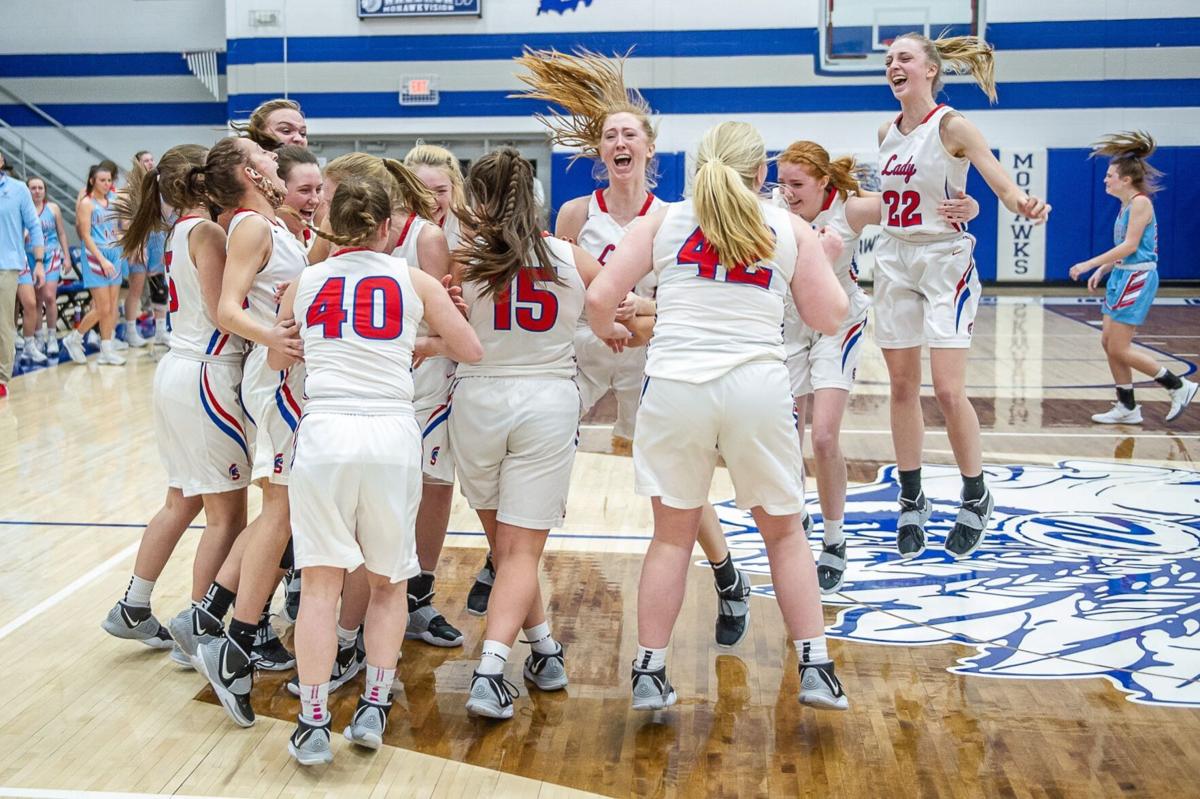 The Southwestern girls' basketball team celebrate winning the program's first sectional title since 2013 after beating Class 1A No. 3 Jac-Cen-Del. The Spartans went onto advance to the regional championship a week later.

The Southwestern girls' basketball team celebrate winning the program's first sectional title since 2013 after beating Class 1A No. 3 Jac-Cen-Del. The Spartans went onto advance to the regional championship a week later.

The 2020-21 girls’ basketball season will be remembered for years to come.

Forget about wins or losses.

The girls’ season, as well as the boys’ and all other athletic events, will first and foremost be remembered for all that the players, coaches and athletic departments had to overcome. There was no guarantee that the season would even be completed.

Several Shelby County teams had to put their season on hold at various times due to the COVID-19 pandemic, but every team was affected in some way.

Aside from the participants themselves, there were times that attendance was limited to only parents, forcing fans to watch from the comforts of their own homes online.

The visiting teams’ cheerleaders were absent until the state tournament began.

Pep bands were unable to perform.

Even minor details, such as each team’s coach shaking hands at the end of the game, were replaced with waving from a distance. And likewise, the players waved at the referees instead of a handshake or fist bump during introductions.

Here’s a look at how the season shaped up for each of the five local teams, in the first of two parts. The second part will run on Saturday.

The Golden Bears were optimistic that with sophomore Kylee Edwards and juniors Jaidyn Tackett and Madison Phares, along with a core group returning from the previous year, they would build off a four-win season.

Shelbyville got off to a rocky start with losses against Waldron and Bloomington North but won four of the next six, equaling their win total from the previous year one-third of the way through the season.

But reaching Hoosier Heritage Conference play, the Golden Bears struggled to pick up wins, finishing 2-5 in the conference.

Shelbyville turned a corner by the end of the season, however, by winning three of its final four games, starting with an overtime victory at Whiteland.

The Golden Bears had the unfortunate draw of playing Class 4A No. 7 Franklin right out of the gate in the sectional first round. The Grizzly Cubs showed their ability to knock down shots from beyond the arc to end the Golden Bears’ season, 77-43.

If there’s any consolation for Shelbyville, it’s knowing that the Grizzly Cubs are still playing in the tournament after knocking off No. 3 Bedford North Lawrence to advance to the semi-state.

Shelbyville returns the vast majority of the team next season, where the Golden Bears will look to reach double-digit wins for the first time since 2016.

It might have come as a surprise to some that the Spartans reached the regional final after knocking off two Class 1A top-10 teams in the sectional.

But this was an experienced and hungry group, ready to prove their toughness.

Led by four seniors in Maggie Correll, Abby Muck, Trinity Tatlock and Lexi Wilkins, along with junior Lily Kerber to round out the starting lineup, the Spartans opened the season by scoring 92 points in coach Garrett Krieg’s debut at the helm.

But while Krieg anticipated his team’s strength this season would be its offense, it actually turned out to be on the other side of the ball.

Southwestern’s length and ability to get deflections, forcing turnovers, created opportunities in transition by the end of the season that provided a boost when the Spartans weren’t hitting shots.

That translated to wins in the second half of the season.

Following a 36-33 loss to Waldron – the team’s second of the season to the Mohawks – in the Shelby County Tournament semi-finals, the Spartans went on a roll.

Southwestern won an overtime thriller at Whiteland by utilizing that ability to get in the passing lane and cut off drives.

The Spartans lost to Jac-Cen-Del the next night, but won five of their last six to close out the regular season.

In the sectional first round, the Spartans were paired up with county and Mid-Hoosier Conference rival Waldron.

The Mohawks had gotten the better of the Spartans in the first two meetings, but the Spartans managed to build a lead in the second half and held on in the final minute for a 52-50 win.

The Spartans set themselves up for another rematch after easily dispensing Rising Sun, 68-35.

Again relying on its defense a week later, the Spartans advanced to the regional final with a 38-31 win over Bethesda Christian.

With the four seniors graduating, the Spartans will be in a rebuilding mode but have four players – Kerber, juniors Alison Muck and Kennedy Pile and sophomore McKinnley Correll – who saw significant varsity minutes this season.

Eye on the Pie: Where’s the money going?

Round two of COVID relief funds have been allocated and billions have been sent out already. Did you get $1,400 for each person in your household? Unless you had less than $80,000 in income ($160,000 for a couple), you didn’t see those checks.

God, the government and taxes

We just recently passed the traditional deadline for state and federal taxes, and April 15 has come to be a dark day for many people, including those who have no faith or trust in our government. They see corruption, huge deficits and wasteful spending, and wonder why they have to pay for it…

Why HB1381 was bad — even the amended version

While HB1381 was amended multiple times before eventually dying on the floor, there is a reason it still didn’t make it through the Senate. HB1381 was introduced to remove the local control over siting and building requirements of commercial scale wind and solar projects across Indiana. Whil…