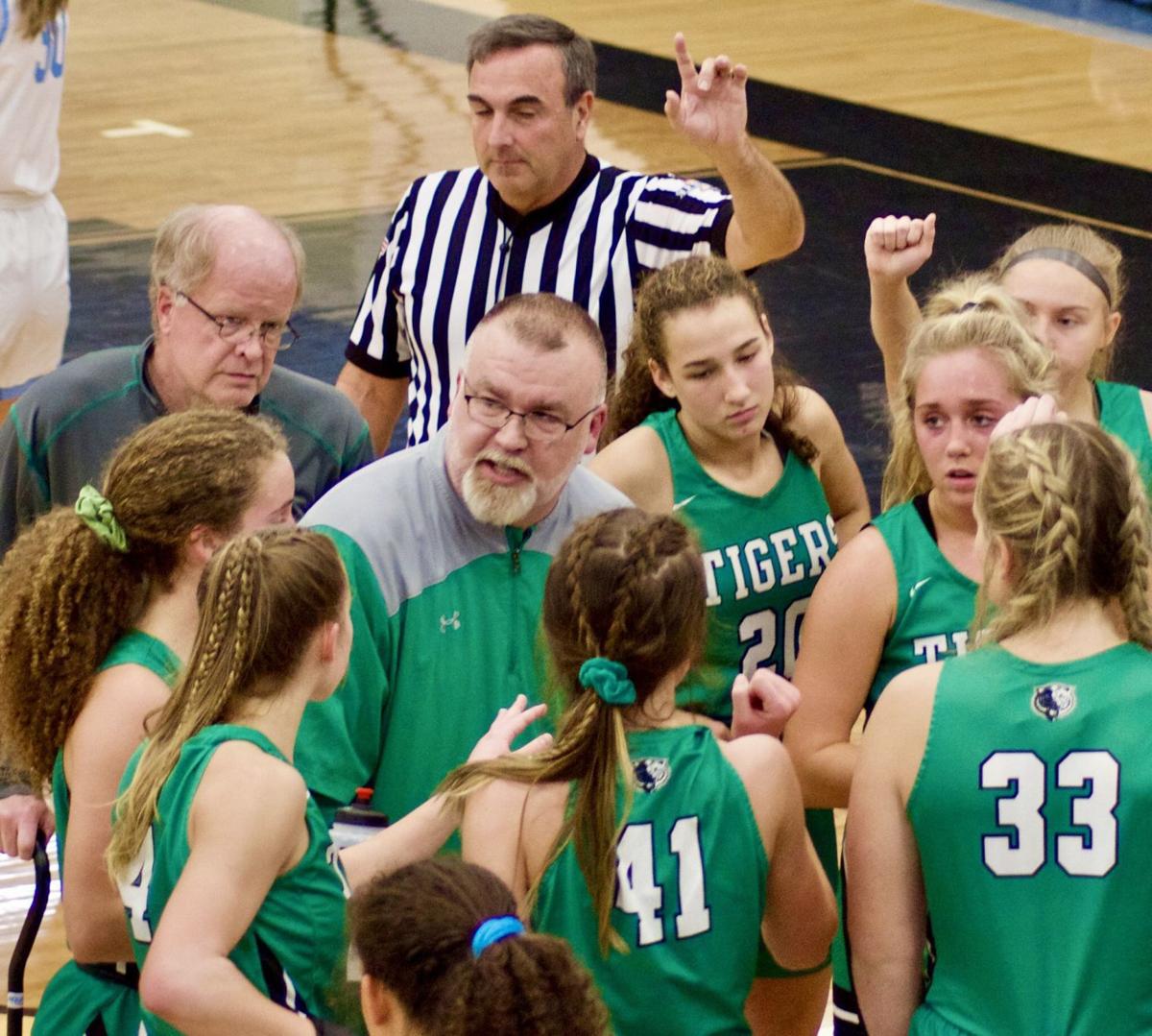 Triton Central head coach Bryan Graham speaks to his team during a timeout Thursday at Cascade. The Tigers beat the Cadets, 57-47. 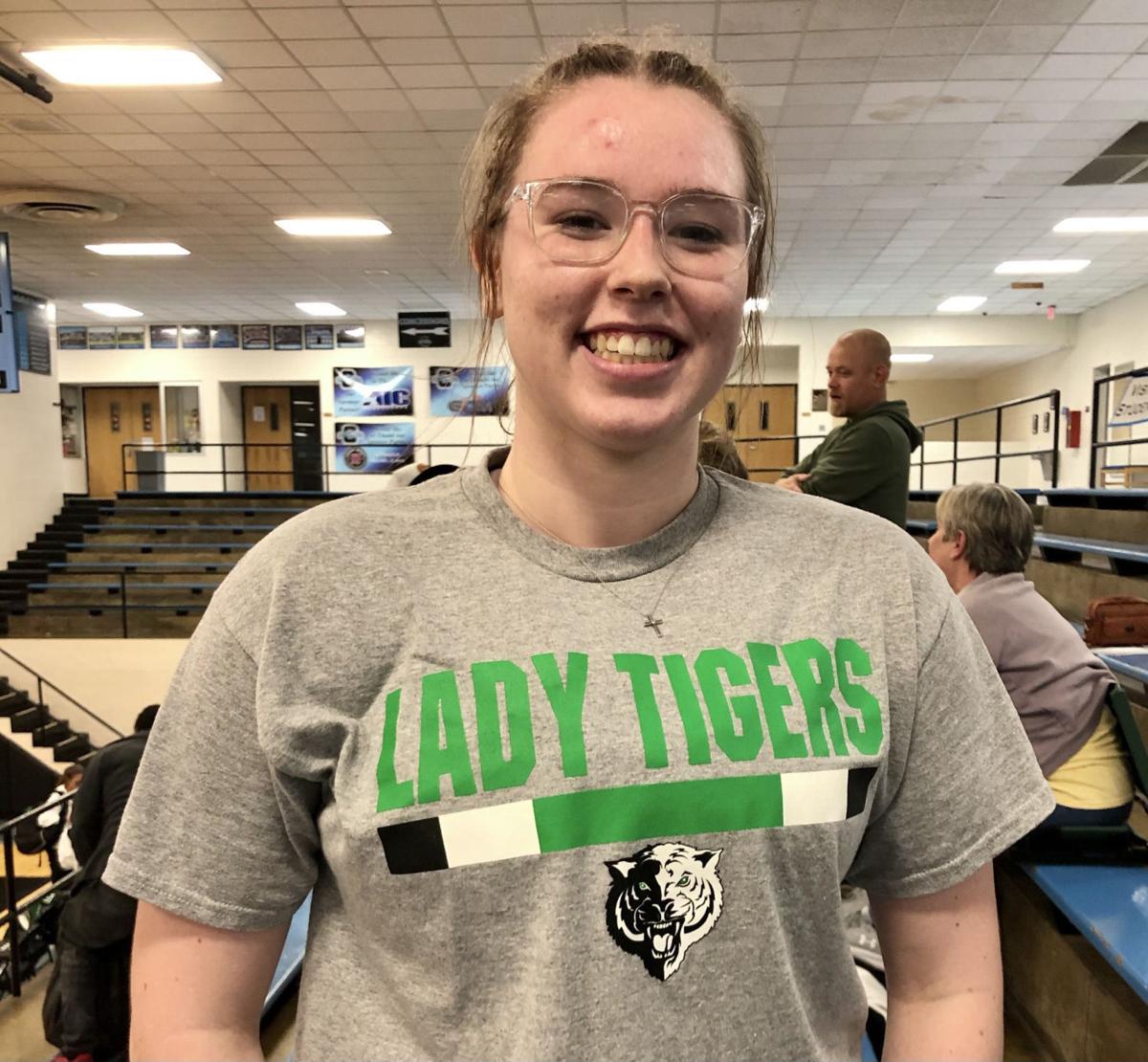 TC sophomore Brooklyn Bailey scored all 10 of her points Thursday in the third quarter.

Triton Central head coach Bryan Graham speaks to his team during a timeout Thursday at Cascade. The Tigers beat the Cadets, 57-47.

TC sophomore Brooklyn Bailey scored all 10 of her points Thursday in the third quarter.

CLAYTON — Brooklyn Bailey played her role to perfection Thursday night at Cascade. The Triton Central sophomore forward came off the bench to score 10 much-needed points in a 57-47 win over the No. 14 Cadets in Indiana Crossroads Conference play.

Bailey’s role for No. 2 Triton Central this season is to provide a spark – rebounds, loose balls, etc. – when she enters the game. She did just that in an important conference game that will likely be the deciding factor in the ICC race.

The Tigers led 29-12 at halftime before being outscored 35-28 in the second half. Bailey’s 10 points, which all came in the third quarter, proved to be crucial down the stretch as the Cadets would not go away without a fight.

Bailey scored her first basket of the third quarter with approximately 2:50 remaining, which gave TC a 33-19 lead. She would score eight more points in the closing minutes of the quarter as the Tigers took a 43-25 advantage into the final period.

On one play in the third, Bailey received a pass from junior guard Lizzie Graham in the middle of the floor. She used a pump fake to create space, drove left and scored through contact near the hoop. Bailey is strong enough to finish at the rim and quick enough to blow past taller, slower defenders, which makes her a unique weapon for TC head coach Bryan Graham.

“Brooklyn had a huge third quarter,” Graham said. “With her size, she is getting in really good shape, but she is still as strong as an ox. She is getting faster and has unbelievable hands and can finish around the basket. I am very proud of her for all the work she has put in.”

Bailey, who is 5-foot-11, played with Indiana Showcase (AAU) over the offseason. As a freshman at TC, she battled 2021 senior forward Bailey Stamper, who is now playing at Indiana University South Bend.

“Playing AAU really helped just going against different people,” Bailey said. “And playing against Bailey Stamper last year really did help, too. She is bigger and stronger than me, so I had to work around her.”

L. Graham scored a game-high 17 points in the win. She hit three 3-pointers in the first half, which helped the visiting Tigers get off to a quick start. Triton Central led 13-9 after the first quarter before limiting the hosts to three points in the second quarter. Graham had 13 points by halftime.

“Lizzie came out and played really well early on, she hit some shots and made some good decisions with the ball,” Coach Graham said. “They changed how they guarded her in the second half, which I would have too.”

Also for Triton Central, which improved to 2-0 and 1-0 in the ICC, junior point guard Jenna Cox scored eight points and made several key hustle plays throughout the night. During one stretch in the second quarter, she drew a charge on one end of the court before grabbing an offensive rebound at the other end.

Cox also did well in pushing the tempo Thursday. Triton Central, with its speed and athleticism, is dangerous in transition.

“Our goal is to get early offense,” Graham said.

Triton Central returns to action Saturday against No. 16 Eastern Hancock (3-0). It will be the home opener for the Tigers.

I remember someone in my family making a version of these many years ago and I never really could figure out the recipe, or what to call it when searching, so I experimented on and off for years before finally just calling it quits and putting it on the backburner. Skip ahead a few years lat…