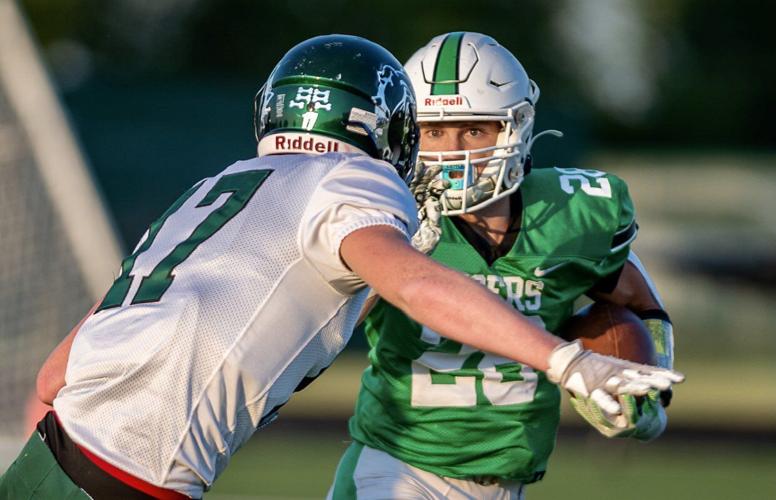 TC sophomore Ray Crawford has been named The Shelbyville News’ Football Offensive Player of the Year. 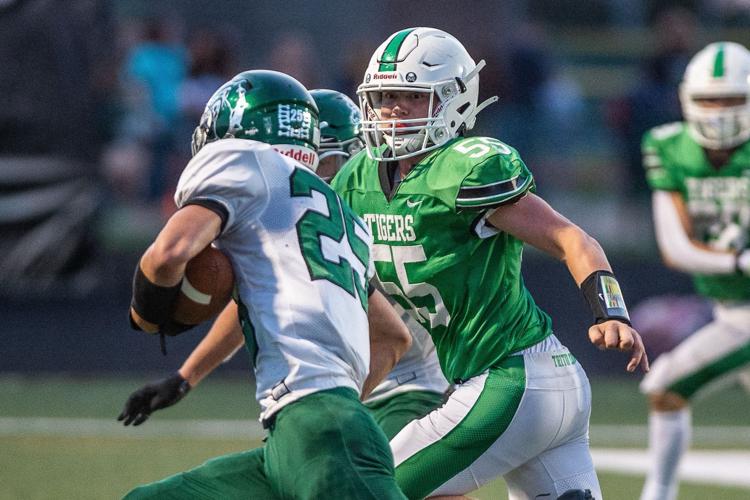 TC senior Jayden Mays has been named The Shelbyville News’ Football Defensive Player of the Year.

TC sophomore Ray Crawford has been named The Shelbyville News’ Football Offensive Player of the Year.

TC senior Jayden Mays has been named The Shelbyville News’ Football Defensive Player of the Year.

FAIRLAND — Opposing teams knew how capable and dangerous Ray Crawford and Jayden Mays were prior to playing Triton Central. Both players made their presence known on both sides of the ball as they helped the Tigers navigate the season with a young squad.

Crawford, a sophomore running back, led TC with over 1,200 yards rushing and over 400 yards receiving to go along with 15 total touchdowns. Mays, a senior linebacker and team captain, recorded 83 tackles (nine for a loss), two sacks and two fumbles.

Despite being a young team, Crawford, Mays and the rest of the Tigers found themselves in a familiar position in November as they captured their third consecutive sectional title.

For their efforts this past season, Crawford and Mays have been named The Shelbyville News’ Football Offensive and Defensive Players of the Year.

Crawford has tallied over 2,600 yards rushing in two seasons so far and is poised for a monster junior season. He said that he does not think about the numbers but does what he can to put his team in the best position to win.

“I am happy that I can help my team anyway that I can,” Crawford said. “Everything starts in the weight room and getting better everyday during practice. I feel like that helped us the most this past season.”

Crawford, who also runs track for Triton Central, has improved his speed and agility the past two years. His opponents have learned that the hard way.

“Running track has definitely improved my abilities on the football field,” Crawford said. “It allows all of us to stay inside the weight room and stay in shape during the offseason portion of the football season.”

Despite having a young squad, Mays, one of five seniors, was a leader that Crawford and the rest of the team looked to throughout the season. Mays said that he always challenged his teammates to help light a fire under them.

“It all starts with us holding each other accountable,” Mays said. “I always challenged the guys in order to get their very best when it came to lifting weights or when we were in the middle of a game.”

Mays was not the biggest player on the field, but he made up for it with his athleticism and his competitive nature, which carried over to the rest of his teammates.

“Mays always led with his actions,” said TC head coach Tim Able. “It helped us get the results we needed.”

Mays backed up his words in the sectional championship (37-35 win over Paoli). He recorded a season-high 12 tackles, including four for a loss.

Mays has not officially decided on whether he will play football at the collegiate level. However, he knows he wants to study mechanical engineering in college.

“I am glad to have been a part of the TC football family,” Mays said. “My hope for the younger guys is that they continue the tradition we have built.”

Justin Powell is a sports correspondent for The Shelbyville News. You can follow Justin on Twitter @Justin_Powell24.

A Look at Indiana’s Future

An article in Sunday’s Indianapolis Star deserves a hard look.

It’s the week after a big blockbuster in “Doctor Strange in the Multiverse of Madness,” and you know that means: I’m going to review a movie that got absolutely stomped at the box office. There can be respectable runners-up in busy holiday seasons, but very rarely does something worthwhile o…