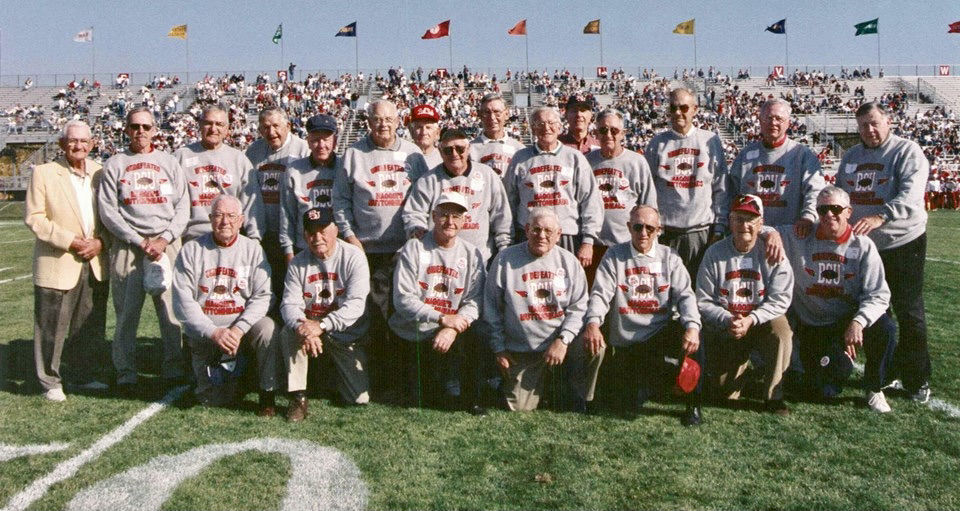 Gene Sexton is in the second row, fifth from the right, with teammates at the 50th anniversary reunion of Ball State’s 1949 undefeated football team. 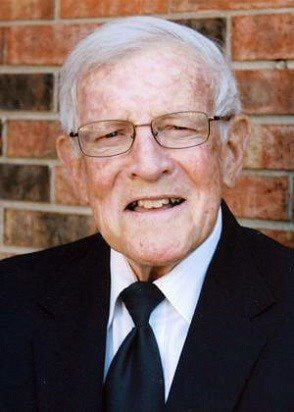 Gene Sexton once related that as principal at Shelby Township Elementary School in 1951, he also taught seventh and eighth grade classes, coached basketball and track and was offered an extra $25 a year to assume a few custodial duties. “It seemed like a good deal to me,” said Sexton. “I was going to be there anyway.”

That succinct comment is an apt career description of the man who would dedicate 38 years as an education professional; teaching, coaching and encouraging generations of Shelbyville students. Yes. Gene Sexton was undoubtedly going to be there.

Sexton was a 1944 graduate of Shelbyville High School where he participated in football, basketball and track.

Following high school graduation, he served a stint in the United States Navy and continued his education at Ball State Teachers College (now Ball State University), graduating in 1950. Sexton was a tackle on the undefeated 1949 Ball State football team that finished the season 8-0 and currently stands as the university’s only undefeated football team.

Coach John Magnabosco’s team outscored its opponents 276-61 during that historic season. The squad’s two-season 14-game winning streak remains a school football record. The entire 1949 team was inducted into the Ball State University Athletic Hall of Fame in 2011. Sexton went on to obtain his Master’s Degree from Butler University in 1958.

At the age of 25, he would become principal at Shelby Township in 1951 and then teach at Colescott Elementary (later Lora B. Pearson) for several years. Sexton moved to the Shelbyville Junior High School in 1957 to teach in the math department. He became full-time principal there in 1964 and would serve in that position until his retirement in 1987.

Sexton coached eventual Shelbyville and Indiana University basketball standout Gary Long at Shelby Township. “There were only 12 people in my class so we always had to play with the older people,” said Long. ”I was playing against eighth graders as a fifth grader. But it was good competition and experience.” Long stated that Sexton’s influence came at a critical point in his development: “Gene had an extensive knowledge of sports and was also an excellent teacher. He was a true mentor at an important time for me.” Long said that Sexton also helped him as a high school student struggling with Algebra. “He was always there for me and I will always be grateful.”

Sexton would coach on the Golden Bear football and track staffs under Bob Zimny during the late 1950s and early 1960s.

Sexton seemed omnipresent during his years at the junior high. He seemed to always be there. He took obvious pride in his school and wanted to make certain that events and activities were carried out effectively and efficiently. Sexton also wanted to be on hand to encourage students. He once said: “It’s important the kids know that the teachers and administrators care. We have to let them know we think what they are doing is meaningful. We need to be there for that reason.”

Mr. Sexton’s impact on Shelbyville extended beyond his considerable school responsibilities and achievements. He served six terms on the Shelbyville City Council and through the years worked in a variety of volunteer roles for the community. Gene’s commitment and achievements were recognized in 2010 with his induction into the Shelbyville High School Alumni Hall of Fame.

He met his wife Helen on a blind date. They were married in 1956 and raised six daughters. She worked as a registered nurse for many years. Helen, a native of Minnesota, came to share her husband’s passion for Shelbyville, most notably Shelbyville sports. “She was just like Dad and had a tremendous devotion to Shelbyville sports teams,” said her daughter, Jeannie. “She was president of the Golden Bear Booster Club for a number years and loved supporting the teams.” Helen passed away in 2020. She and Gene had been married for 64 years.

Gene and his ever-present cohort, Jim Gardner, were great friends. Gardner served as assistant principal and guidance counselor for Sexton for 24 years at the junior high. Like Sexton, Gardner held a deep sense of esteem for and dedication to Shelbyville schools. The two took tickets at Garrett Gymnasium’s Gate 3 for more than four decades and could be found at a variety of Shelbyville sporting events during that time. Both men would stay active well into their 80s working Golden Bear track meets and helping as needed at other school events.

Sexton once commented that he and Gardner were kindred spirits who maintained similar perspectives: “Jim and I enjoyed doing those things and attending events. I think both of us appreciated the chance to get an education and participate in sports. We saw many others who didn’t get those opportunities. School had been good to us. We felt we owed something. I think that is probably why we didn’t mind being there much of the time. We felt comfortable there.” Gardner died in 2016 at the age of 92.

Today, Mr. Sexton is approaching his 96th birthday and is living at Ashford Place Retirement Community in Shelbyville.

Last summer, I was looking for a friend’s new residence next door to where Gene was living at the time. I mistakenly knocked on his door. I identified myself as a former pupil and his caretaker immediately invited me in to see Mr. Sexton. Gene was busy working a puzzle but immediately focused welcoming attention on his unexpected guest. We enjoyed a most-satisfying 15-minute visit.

I remain forever grateful for that brief interaction. During our discussion, I sensed that I was in the presence of one of Shelbyville’s finest sons whose mission had always been to diligently work to build a community of better people.

Based on our visit, it occurred to me that for Mr. Sexton, very little had changed from his days as an educator. He was once again intent on taking time to interact with and support one of his former students. He was still a teacher. He still cared.

I felt heartened and uplifted after our visit. That was not unusual. I think everyone feels that way after talking with Gene Sexton.

The backstory behind the Medicare Advantage ads

Almost daily a solicitation arrives in my mailbox trying to entice me into buying a Medicare Advantage (MA) plan. Open enrollment is approaching October 15. Advise, an outfit that claims they are health Plan Medicare experts, wants me to “get the most from Medicare.” Another outfit, eHealth …

I sound like a broken record. It seems like every few weeks I’m writing about COVID-19 in one way or another.