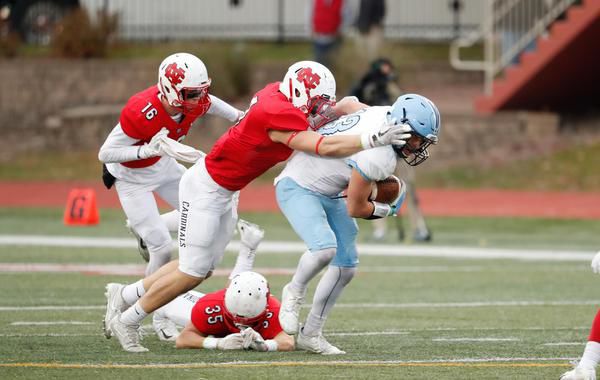 North Central College photoTC graduate Bryan Beauchamp (middle in red) grabs a runner and takes him to the ground. 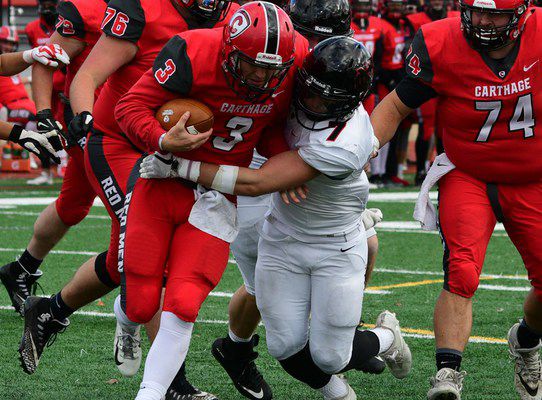 North Central College photoTC graduate Bryan Beauchamp (middle in red) grabs a runner and takes him to the ground.

Beauchamp headed north to Naperville, Illinois, to play at North Central College – a Division III school that competes in the College Conference of Illinois and Wisconsin. The Cardinals football program knew success and Beauchamp had an opportunity to make an impact immediately.

And he did, recording 19 total tackles and collecting the only interception of his now four-year career in 2016 when North Central finished 11-1.

If the goal is to have your senior year be your most memorable one, Beauchamp has accomplished just that. The starting linebacker has 64 total tackles (second best on the team), 9.5 tackles for loss, 1 quarterback sack, 1 fumble forced, 1 fumble recovered, and one blocked kick for a Cardinals team that is 11-1 and one win away from playing for the Division III national championship.

At noon today in Allentown, Pennsylvania, No. 5-ranked North Central College (11-1) plays at No. 4 Muhlenberg (13-0) in the first-ever meeting between the two programs.

Getting to Allentown meant eliminating a fellow Tigers’ collegiate program, a wild road victory over a D-III powerhouse, and a final home victory that put North Central College in the final four. Before all that could happen, there was an early-season loss to a conference rival that made reaching the postseason a little more difficult.

On Oct. 5, Wheaton College retained possession of the Little Brass Bell with a 35-21 home win over North Central which meant winning the conference title and the automatic postseason bid was all but out of the equation.

“We knew we had the tools to make a deep run this year,” said Beauchamp via phone interview Thursday morning just hours before leaving for Pennsylvania. “We dropped a game against Wheaton (located about 20 minutes north of Naperville) and it was a wake-up call. It shifted our mentality, it showed he hadn’t arrived yet.”

“That was fun,” said Beauchamp. “Mason and I were texting back and forth during the week poking fun at each other.”

Beauchamp and the Cardinals had a little more fun, though, in a 51-15 victory.

The win over the Little Giants set up a monumental task — defeat No. 2-ranked Mount Union on its own field.

“As soon as we saw the bracket, all of us here were excited for it,” said Beauchamp. “We had to take care of Wabash first but we were excited to play them and knock them off.”

“We wanted to go there and bully the bully. It was a tall task,” said Beauchamp.

Mount Union has won 13 D-III football national championships since 1993, which is a record for any college football program.

Defense was nearly non-existent in the Nov. 30 meeting as both teams’ stellar offenses showed off. The Cardinals racked up nearly 700 yards of offense and still couldn’t get away from the Purple Raiders, who had the ball on its own 40-yard line with 2:30 to play.

“Our goal is always to shut down the other team’s offense but as that game went on it was we need one more stop,” said Beauchamp.

Leading 59-52, the Cardinals’ defense gave up a 50-yard pass play that put Mount Union near the goal line. But three straight tackles of the quarterback and a fourth-down interception in the end zone sealed the victory.

“We didn’t shut them down but we kept them out of the end zone when we needed to,” he said.

The celebration was brief. There was still more work to do.

“All of us older guys said it was our goal to win and we could celebrate until Monday,” said Beauchamp. “Then we hit the reset button and moved on the next opponent.”

Delaware Valley State (Pennsylvania) quickly found that despite the Cardinals’ defensive struggles against Mount Union, Beauchamp and his boys could be stingy. The visiting Aggies were held scoreless in the first half and North Central rolled on to a 31-14 victory that set up the final four appearance today.

“It’s a very disciplined team,” said Beauchamp of Muhlenberg. “They are in the semifinals for a reason. They are not the athletes of Mount Union but their 11 guys are very disciplined (at what they do).”

Today’s winner will face either Saint John’s (Minnesota) or Wisconsin-Whitewater in the Division III national championship game, known as the Amos Alonzo Stagg Bowl, on Dec. 20 at Woodforest Bank Stadium in Shenandoah, Texas.

With his playing days clearly numbered, Beauchamp has his eyes set on the future. He will graduate in the spring with degrees in Marketing and Management and a minor in Accounting.

“I figure coaching is somewhere along the line for me,” laughed Beauchamp. “(Before that), I will put the cleats away and get a job and make some money.”

While his decision was unique to follow his own path to North Central College, he has never wavered on the decision.

“Looking back now, not just the football side but the education has been tremendous,” he said. “All the friends I’ve made here ... it’s been an awesome experience.”