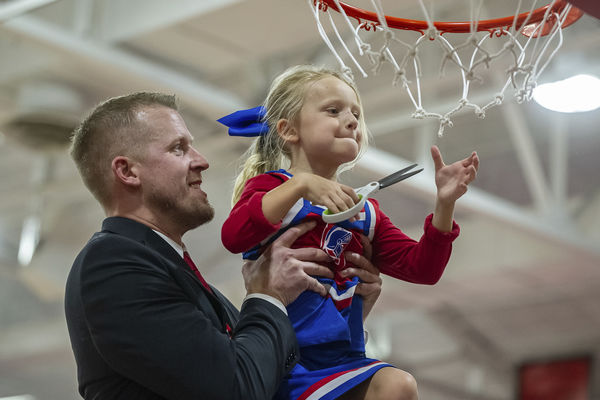 Southwestern head coach Brady Days helps his daughter cut down the net after winning the Shelby County Tournament on Saturday. 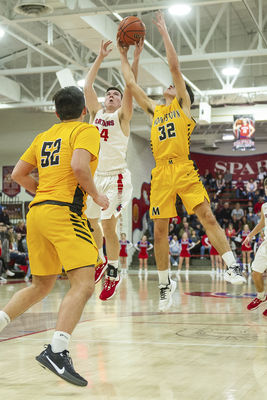 Southwestern head coach Brady Days helps his daughter cut down the net after winning the Shelby County Tournament on Saturday.

Southwestern head coach Brady Days was grinning from ear to ear. Helping his daughter cut down a chunk of the net after winning the Shelby County Tournament on Saturday, Days was understandably excited. After 14 years with the Spartans, he knows how hard it is to win a county tournament — which made the moment with his daughter and his team after the game even more special.

Southwestern (9-3) rallied past the defending champions in Morristown on Friday before a date with Triton Central on Saturday. Behind stellar play from the Hartsell brothers, Anick and Aiden, the Spartans earned their first county tournament title since 2010. Anick, a junior, and Aiden, a sophomore, were named Co-Most Valuable Players after a 47-32 championship victory.

It was a total team effort, however, as Days noted. Seniors Noah Muldoon and Decklan Pappano and juniors Kirk Van Gorden, Ethan Wendling and Christian DeArmitt all contributed in the wins.

"(It was) an outstanding weekend," Days said. "It was unbelieveable what our role players did. Noah Muldoon and Decklan Pappano did some great things for us. And Kirk Van Gorden was flying out of everywhere getting rebounds. Everyone did some awesome things for us. That is what is going to make this county championship so special. I am so proud of our guys."

Aiden scored a team-high 27 points Friday against Morristown but did not play in the fourth quarter after turning his ankle. With a brace on his ankle, Aiden came off the bench Saturday to finish with 10 points. Anick was his usual self over the weekend, scoring 19 points on Friday and 22 points on Saturday.

The two brothers, who ride to school together and even sit on the bus together on the way to away games, are as close as siblings can get. It is evident by their actions on and off the court.

"No one is more deserving (of MVP) than those guys," Days said.

The Spartans led the Tigers 10-7 after the first quarter and 21-14 at halftime. Aiden Hartsell scored all 10 of his points in the first half before his brother took over in the third and fourth quarters, scoring 17 points after the break.

Southwestern outscored Triton Central 17-6 in the third quarter en route to the win.

Southwestern beat Morristown Friday for the first time since December of 2016. It was a special run for Morristown — against all county schools for the last two and a half seasons — but the Spartans earned their 66-54 semifinal win over the Yellow Jackets.

Morristown led 28-24 at halftime with junior guard Kyle Crim nailing a 3-pointer before the buzzer. Junior guard Drake Moore and senior forward Matty Livezey both scored eight points in the first half, while Southwestern was led by Anick Hartsell with 18 points.

A floater by Aiden Hartsell before the third-quarter buzzer gave the Spartans breathing room (45-39) heading into the final period of play as the team rallied back to take control of the game.

A three from Pappano, who grabbed eight rebounds off the bench, put Southwestern up 48-39 with 6:55 to play in the fourth quarter, forcing Morristown to use a timeout. The Yellow Jackets would get the lead down to seven points (57-50) with 1:35 to play but that was as close as the team would get as the Spartans remained poised down the stretch for the semifinal victory.

Morristown (7-4) was led by senior forward Trevon Carlton in the loss. He had 19 points and seven rebounds and was named to the all-tournament team.

"First of all, congratulations to them (Southwestern)," Morristown head coach Scott McClelland said. "Their game plan was outstanding. I want to recognize their kids and their staff. They were very good.

"Right now we are not recognizing any situations. Our first four or five possessions of the second half were turnovers. We are just inconsistent."

Crim paced the Yellow Jackets with nine points and 12 rebounds. Livezey finished with 10 points in his final county tournament.