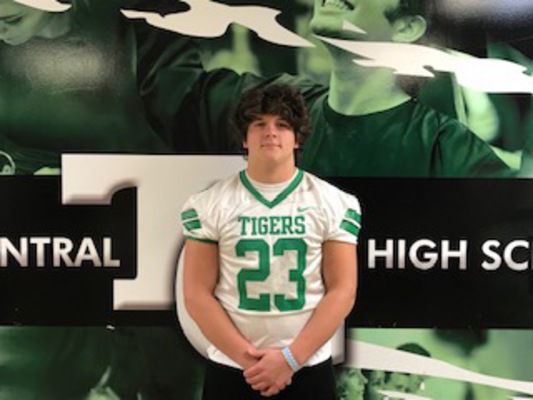 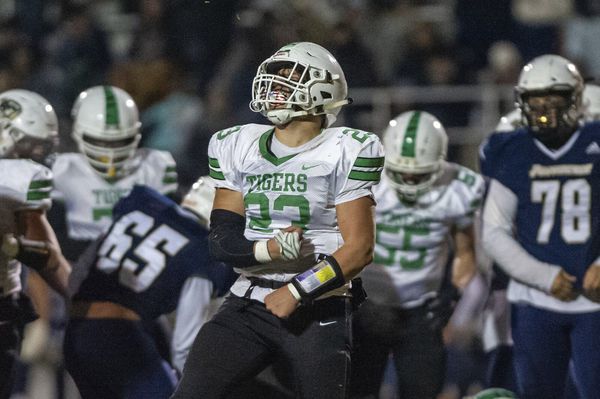 File photoTriton Central junior linebacker Hayden Kermode celebrates after making a play in a game this past season.

File photoTriton Central junior linebacker Hayden Kermode celebrates after making a play in a game this past season.

FAIRLAND — Under head coach Tim Able, the Triton Central football team has been nothing short of a successful. And with junior linebacker Hayden Kermode at the helm of the defense, TC has earned a reputation for being tough and nasty.

This past season, Kermode broke TC's single-season tackle record, recording 180 tackles in his second season in the linebacker position. Kermode, aside from breaking the tackle record, also earned numerous awards for his play on the field. Kermode was named to the Indiana Crossroads Conference All-Conference team, the ICC All-Conference Academic team, the IFCA All-State team and was a honorable mention on the AP All-State team for Class 2A.

For his accomplishments in an impressive season, Kermode has been named The Shelbyville News' Football Defensive Player of the Year.

Kermode, who helped TC reach semistate this past season, credits his coaches and teammates for getting him this far in his football career and is humbled for the honor he has received.

"I just went out there and played," Kermode said. "I trusted my teammates, and I could not have done it without them. Especially defensively, there are so many things that must be done for me to make plays. So, it must start up front with our defensive line, our other linebackers filling their holes, and they (ball carriers) would come to me. I would make the play."

Coach Able says he has never had anyone in his 37 years of coaching like Kermode on the defensive side of the ball and says he is one of the smartest players he's ever coached.

"I've never had a linebacker in 37 years that can read schemes and read things," Able said. "His ability to instinctively react in the middle of a play is pretty hard to teach. I distinctly remember against Evansville Mater Dei at halftime (semistate); it was those two guys (Kermode and senior Luke Hornung) and me that made the adjustments. There were no other coaches, and we handwrote on our play sheets. That was when we had our 22-play drive, the whole third quarter we had the ball and scored the first play of the fourth quarter."

Kermode had to adjust quickly to playing linebacker. He made it look easy.

"This is my second year playing linebacker," Kermode said. "It was a lot easier than my sophomore season, but there were a lot of challenges. Coach Kegley (defensive coordinator) trusts me to realize things, adjust in the middle of plays and even make calls without his guidance. That took a lot of pressure off me. He had trust in me, and if I messed up or if there was a bad call, he would be behind me."

Kermode knows that he will be stepping into a full-time leadership role next season. But his teammates already see him as a leader out on the field.

"Hayden is a good leader," Hornung said. "If he sees us being lazy during practice, he's not afraid to call people out. He's a vocal leader and leads by example. So if people could look up to him, that would be great."

Kermode has one season left on the Tigers' defense, and he is excited to see what his team can accomplish next season.