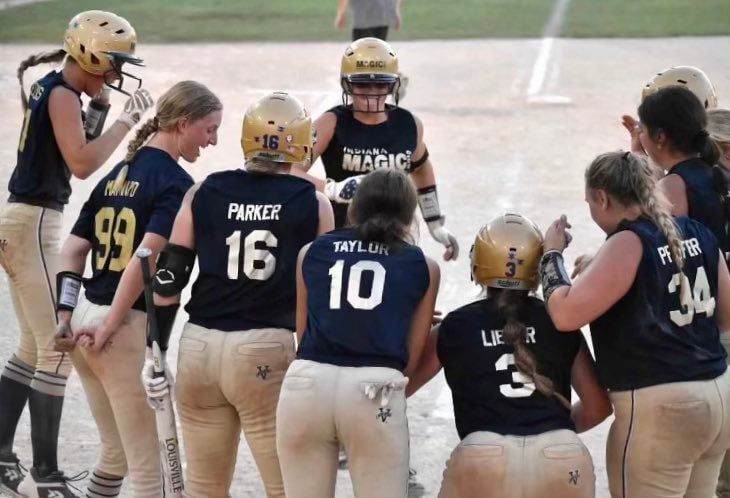 Shelbyville’s Karissa Hamilton celebrates with her Indiana Magic Gold teammates after hitting a grand slam in the championship game in the Alliance League, which recently took place in Columbia, Mo. Her home run came in the top of the seventh inning with two outs and her team down by one run. 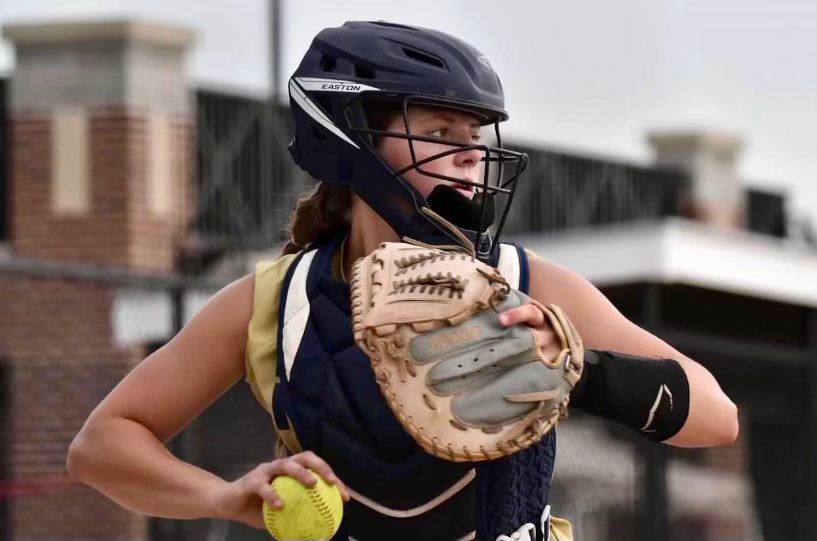 Shelbyville’s Karissa Hamilton has been named The Shelbyville News’ Softball Player of the Year.

Shelbyville’s Karissa Hamilton celebrates with her Indiana Magic Gold teammates after hitting a grand slam in the championship game in the Alliance League, which recently took place in Columbia, Mo. Her home run came in the top of the seventh inning with two outs and her team down by one run.

Shelbyville’s Karissa Hamilton has been named The Shelbyville News’ Softball Player of the Year.

Karissa Hamilton does not step into the batter’s box looking to tear the cover off the softball. Sometimes, it just happens.

Not many high school players are as strong and powerful as Shelbyville’s softball star, who proved she was one of the best players in the state – and country – this past season with the Golden Bears.

When most players put a barrel on the ball, it will produce a whistling line drive or a screaming ground ball. When Hamilton connects, however, she sends the ball into orbit.

“When I am up to bat, I am just looking for my pitch to drive,” Hamilton said, who hit her first home run during 10U softball. “If you try and hit a home run, you are going to pop it up and not hit it very well. Home runs are kind of lucky. I try to be disciplined and consistent with my swing.”

Hamilton, a catcher and outfielder, ended her junior season with 22 home runs (second in state) while hitting .607. She also totaled 57 runs, 55 RBIs and 11 doubles, helping SHS break the school record for wins in a season with 24.

For her accomplishments this past season, Hamilton has been named The Shelbyville News’ Softball Player of the Year.

“We all had pretty high goals going into the season,” Hamilton said, who hit seven home runs as a freshman before missing her sophomore season due to the COVID-19 pandemic. “We worked hard going up to that point. With all the talent we had, I was pretty confident we could break the school record.

“Once I got up to 18 or 19 home runs, I was like I can do this. I can get to that record (state record 22) and possibly beat it. I had my teammates backing me up. They believed in me. But I was nervous at the same time, 22 is a big number.”

Pioneer’s Haley Cripe, who led her team to the Class A state championship, passed Hamilton’s home run total in the postseason. Cripe finished the season with 23 home runs but played in eight more games than Hamilton.

MaxPreps and other media outlets and organizations noticed her special campaign. Hamilton, who will continue her softball career at the University of Kentucky, was one of 27 players in the country named to the 2021 MaxPreps’ All-America First Team. She was also named a finalist (one of three) for the IndyStar Softball Player of the Year honor. Keagan Rothrock, who led Roncalli to the 4A state title, was named IndyStar POY, it was announced Thursday.

Hamilton was voted ICGSA District 4 All-State and to the All-HHC (Hoosier Heritage Conference) team, as well.

She is currently playing with Indiana Magic Gold 04 Kleiner this offseason. The group recently won the Alliance Fastpitch Championship Qualifier in Columbia, Mo and will compete in the IMG National Warmup Tournament this weekend in Kokomo.

Travel softball has certainly made a difference in her swing and overall play, Hamilton said, as she sees some of the top players in the country each summer.

As for her senior season at Shelbyville? Hamilton already knows what she wants to accomplish.

“I definitely want to do better than I did this year, which will be a challenge,” Hamilton said. “But I am up to it. My goal is to get up to 24 or 25 home runs. I set high standards this year, but I am ready. I know it is a year away, but I am looking forward to that.”

Note: Hamilton, who competed in two events at the IHSAA State Swim Finals this past school year, was also named The Shelbyville News’ Female Athlete of the Year earlier this summer.