Jordan Jones heads for home plate to tie the game in the bottom of the first with Anick Hartsell right behind him to take the lead. 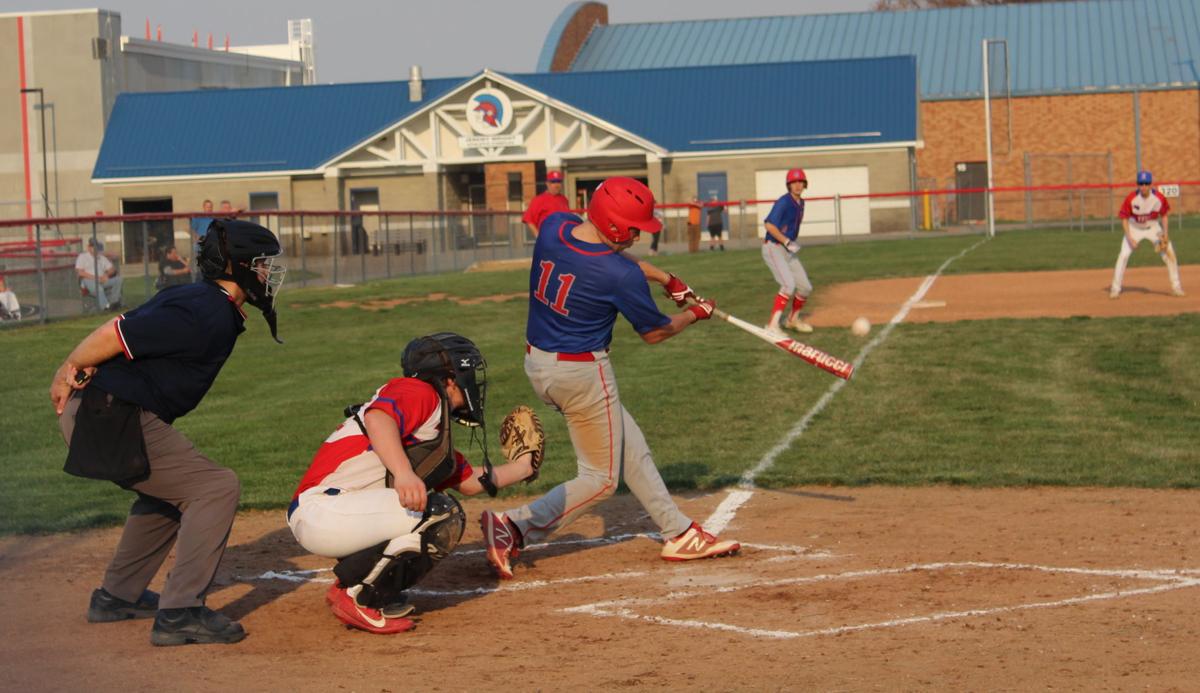 Ethan Wendling drives in a run in the third inning to give Southwestern a 3-1 lead. The Spartans went on to win the season opener, 9-2.

Jordan Jones heads for home plate to tie the game in the bottom of the first with Anick Hartsell right behind him to take the lead.

Ethan Wendling drives in a run in the third inning to give Southwestern a 3-1 lead. The Spartans went on to win the season opener, 9-2.

After regional appearances in soccer and basketball earlier this school year, the Southwestern baseball team has a group of players who know how to win.

The Spartans, ranked third in Class 1A in the opening Indiana High School Baseball Coaches Association poll, proved it in a 9-2 season-opening win against Eminence on Monday.

Some opening night jitters might have been the reason for an early 1-0 deficit, but once the offense got rolling, the Eels had no answer.

“We’re expecting a lot of good things from them,” he said of those returning. “Today I thought we come out a little slow offensively, first live pitches of the year.”

Eminence took a one-run lead when Southwestern was unable to make a throw around the bases in the top of the first.

Freshman Trevyn Burnett scored on three throwing errors that allowed him to round the bases to home plate.

But the Spartans were quick to respond.

With junior Jordan Jones and senior Anick Hartsell on base with one out, both scored on a triple by senior Ethan Wendling.

The Spartans added a run by Jones on a double by Wendling in the third, and two more in the fifth when DeArmitt scored on a triple by sophomore Matthew Clements and Clements scored in the next at-bat on a single by Jonah DeArmitt.

“I thought as the game went on we got a lot better at the plate, a little more selective and drove the ball,” Ingels said

Eminence plated a run in the sixth when senior Daniel Kelsey scored on a wild pitch, but the Spartans left little doubt about the outcome in the bottom half of the inning.

Southwestern put itself in scoring position with three stolen bases and capitalized on Clements’ second triple of the game that drove in three runs. Jonah DeArmitt drove in another run for the seven-run lead.

Anick Hartsell reached base twice on a single and hit by pitch and Wendling tripled and doubled. Jonah Hartsell also singled twice.

Jones came in in relief, striking out two and giving up a hit in three innings.

“I thought they did a good job of first pitch strikes, and then they could throw, they could mix in their pitches a little more,” Ingels said. “Again, (this was the) first time they’ve faced batters this year and I thought they did a good job. (The) defense made a couple good plays when we were in situations with runners on base. Ethan made a couple good plays at third base. We turned a double play early in the game, things that I think we’re going to feel really confident with our infield.”

Anick Hartsell closed it out in the final inning, allowing one hit and striking out one batter.

“Having so many guys returning from that, a lot of teams know who we are, Ingels said. “We still have a lot to improve on. We still haven’t won a championship yet but we have high expectations. That’s fun to have but we have such fun guys and such competitors that I think it’s going to be a lot of fun.”

It now seems the Indiana Legislature is determined to pass Senate Bill 5, which is a direct response to actions taken by local health departments during the COVID-19 pandemic. We write this column to educate Hoosiers on the many dangers of SB 5 with a plea to Governor Holcomb that he veto the bill.

Between the Covers: The Soul of a Woman

The Soul of a Woman by Isabelle Allende is this famous author’s views of the lives of women and feminism over the course of her lifetime. She was born into a family where the father left her mother with very little except three children to care for without resources. Allende’s life has, in p…

Chew This! A Delicious Chocolate Pie

I have a long history of pies. My Great Grandma Viola Davis made pies for the old Kennard Restaurant. She was known for some of the best fruit pies in all of the county. She taught my Grandma Deloris Bolinger her pie making skills and then she passed them along to my Mom, Darla Doubman. On t…