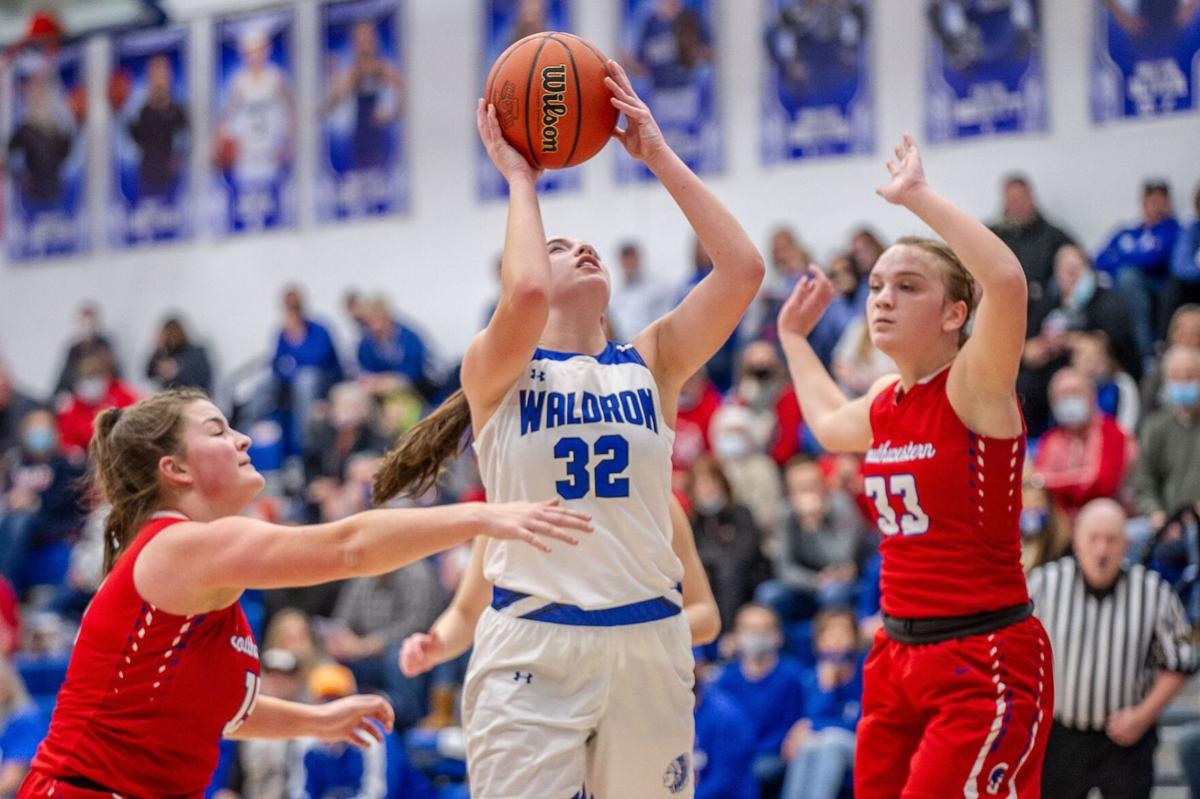 Waldron’s Bella Larrison puts up a shot against Southwestern in the sectional. Larrison is one of several juniors who will be back next season following a record-breaking 2020-21 season. 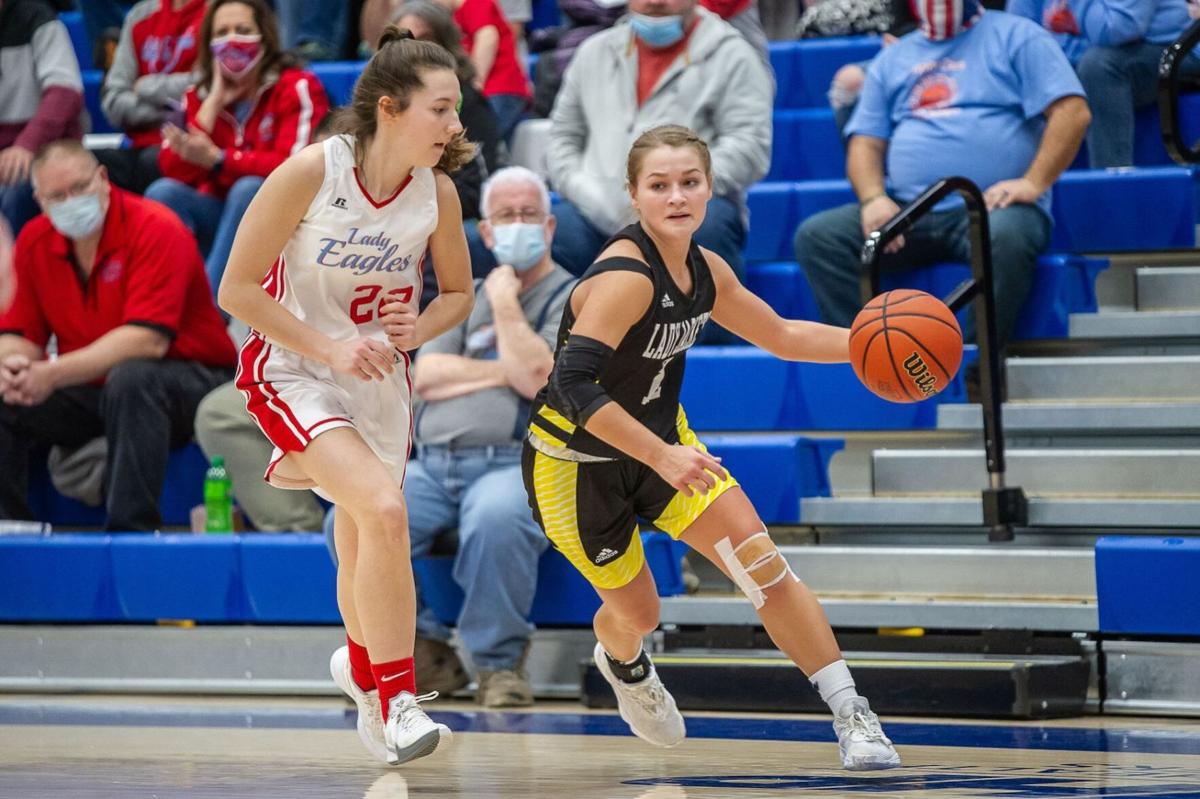 Emma Theobald drives to the hoop during Morristown’s sectional loss to Jac-Cen-Del. The senior led the Yellow Jackets in scoring this season. 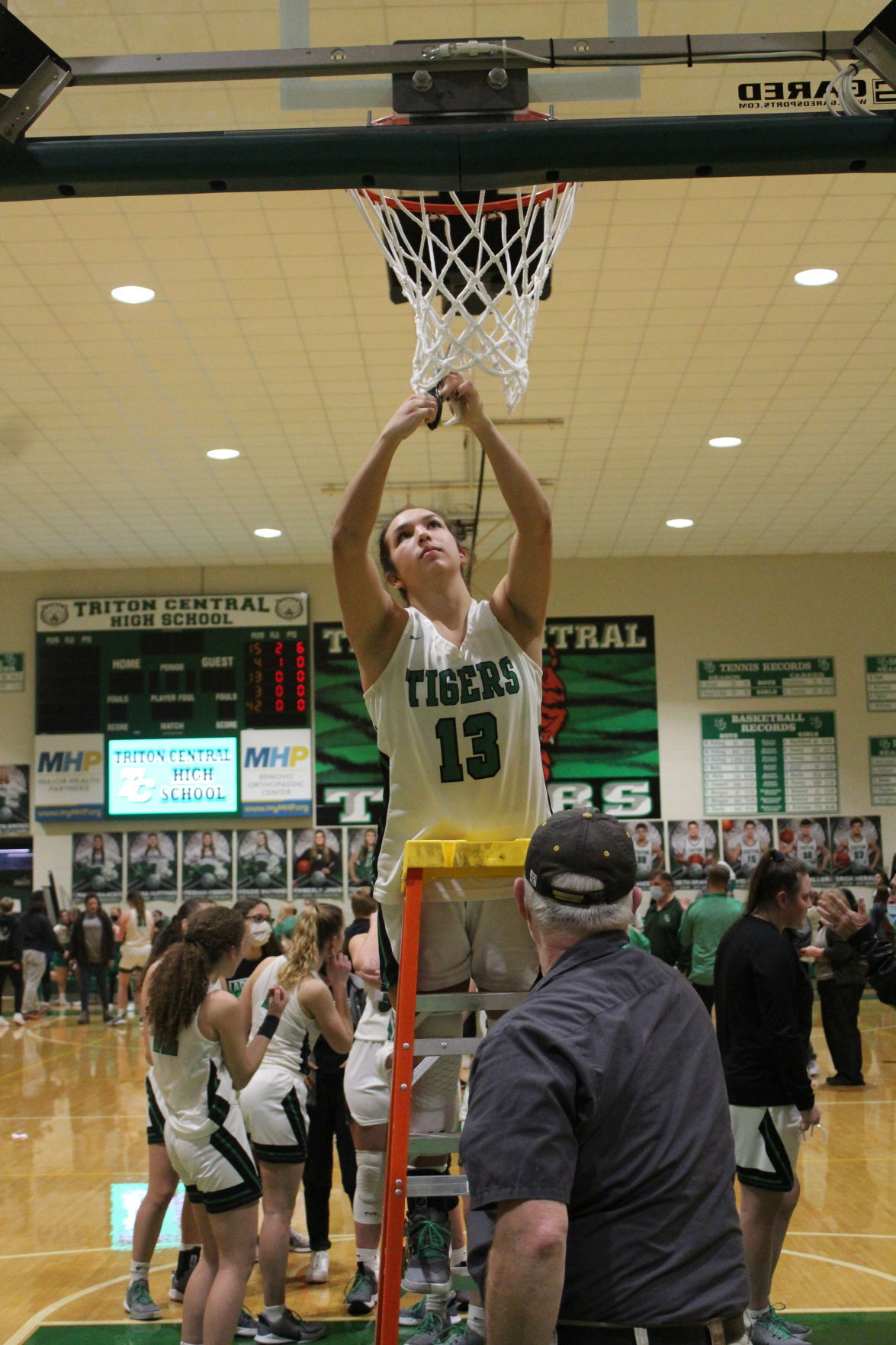 Waldron’s Bella Larrison puts up a shot against Southwestern in the sectional. Larrison is one of several juniors who will be back next season following a record-breaking 2020-21 season.

Emma Theobald drives to the hoop during Morristown’s sectional loss to Jac-Cen-Del. The senior led the Yellow Jackets in scoring this season.

The 2020-21 girls’ basketball season started under a cloud of uncertainty whether or not it would be completed due to the COVID-19 pandemic.

All five Shelby County teams made it through the season despite a few interruptions for a few of them. It ended with two teams winning sectional titles, one enjoying a historic season and the other two turning the corner by the end.

Here is part two of The Shelbyville News’ look back:

It should come as no surprise that the Tigers (20-4) won their fourth consecutive sectional title and eighth under the helm of coach Bryan Graham.

What made the accomplishment all the more impressive is that the Tigers did so having lost most of the previous season’s regional championship team, including an unexpected loss.

Senior Tenleigh Phelps sat out the season due to injury, which forced senior Bailey Stamper, who was already anticipating a larger role as a starter, to step her game up.

She did, as did senior Taylor Heath and a group of younger players who saw limited action the previous season.

Despite a 58-49 loss to Greenwood Christian to open the season, the Tigers showed potential in a 95-89 double overtime win over Indiana Crossroads Conference rival Cascade the following week. That win started a six-game winning streak, and Triton Central won 13 of its next 14, including a 45-43 victory over Waldron to reclaim the Shelby County Tournament title.

Sophomores Lizzie Graham and Jenna Cox, as well as senior Kenzie Ryle stepped into larger roles this season. Graham turned into the team’s second-leading scorer and was one of the Tigers’ threats from outside, along with Ryle and Cox. Junior Maia Harris also came off the bench to provide valuable minutes.

After falling to New Palestine, the Tigers won their final five games before the state tournament.

Triton Central didn’t run into much competition on its home court in the sectional, easily defeating Eastern Hancock 70-47 in the semi-final and pulling away from Indianapolis Scecina in the championship after somewhat of a slow start.

The Yellow Jackets were on a roll by the time they faced Jac-Cen-Del in the sectional first round.

After the pandemic forced the team to put its season on pause, including the loss of the Kopper Kettle tournament at the start of the season, Morristown found itself with a 4-9 record as it entered the home stretch.

That’s when the team found its stride, winning seven in a row to close out the season led by seniors Rylee Kleine and Emma Theobald.

Morristown finished third in the Mid-Hoosier Conference with a 4-2 record, beating all four non-county opponents. The Yellow Jackets’ finish to the season meant that all three Shelby County schools finished in the top-three in the MHC.

After Jac-Cen-Del beat Oldenburg Academy in the first round of the sectional, it meant the Yellow Jackets would open their tournament against the 12-time defending sectional champion.

Morristown was up to the task at the beginning but a five-point play in the second quarter seemed to swing the emotions of the game and Jac-Cen-Del advanced with a 59-44 win.

When Theobald fouled out in the fourth quarter, it created an emotional moment for her, her coach, Rachel Kleine, and her teammate, Rylee Kleine.

Rylee Kleine was taken out of the game shortly thereafter for more hugs with her mom and teammates.

The two seniors led the Yellow Jackets in almost all categories during the season, including points, rebounds and assists.

But Morristown found other weapons during the course of the season, starting with sophomore Raegan Kleine, who became one of the better options on offense as well as a force defensively.

And the Yellow Jackets return a core group of players next season who gained varsity experience under the leadership of the two seniors, including juniors Gracie Laster and Delaney Cornn, and sophomores Maggie Lutes and Emma Spahr.

It was a season to remember for the Mohawks – and with a large group of juniors returning as seniors, the immediate future looks bright.

Going into the season, coach Anthony Thomas knew he had a special group of girls, and they lived up to those expectations.

The Mohawks rolled off five-straight wins before back-to-back losses to state-ranked teams in Triton Central and Jac-Cen-Del.

The team refocused after that and it showed through the course of the remainder of the season.

Waldron won 13 of its final 14 regular season games, including winning the Lady Mohawk Holiday Classic. The one loss came against Triton Central in the Shelby County Tournament championship in a game that the Mohawks just couldn’t pull out at the end.

Earlier in the season, the Mohawks defeated Southwestern twice, once in an MHC contest at the beginning of the season, and again in the county tournament.

But when the two teams met for a third time, the Spartans got the better of the Mohawks, 52-50, which sparked them to an eventual regional championship appearance a week later.

Waldron loses its leader in senior Lauryn Thomas but returns everyone else to a team looking to climb higher in its achievements.

Juniors Mackenzie Shaw and Hadlie Ross will also be back after gaining valuable experience.

Who Benefits from School Choice?

The Republican supermajority in the Indiana General Assembly is currently attempting to prioritize private education benefiting fewer than 10 percent of students, while underfunding its constitutional duty of providing a system of common school open and available to all. It is public schools…

Use of algorithms can perpetuate bias

For most of us, the word “algorithm” is fairly new to our vocabulary. But badly designed decision-making algorithms have a growing impact on our lives and can do a great deal of damage.