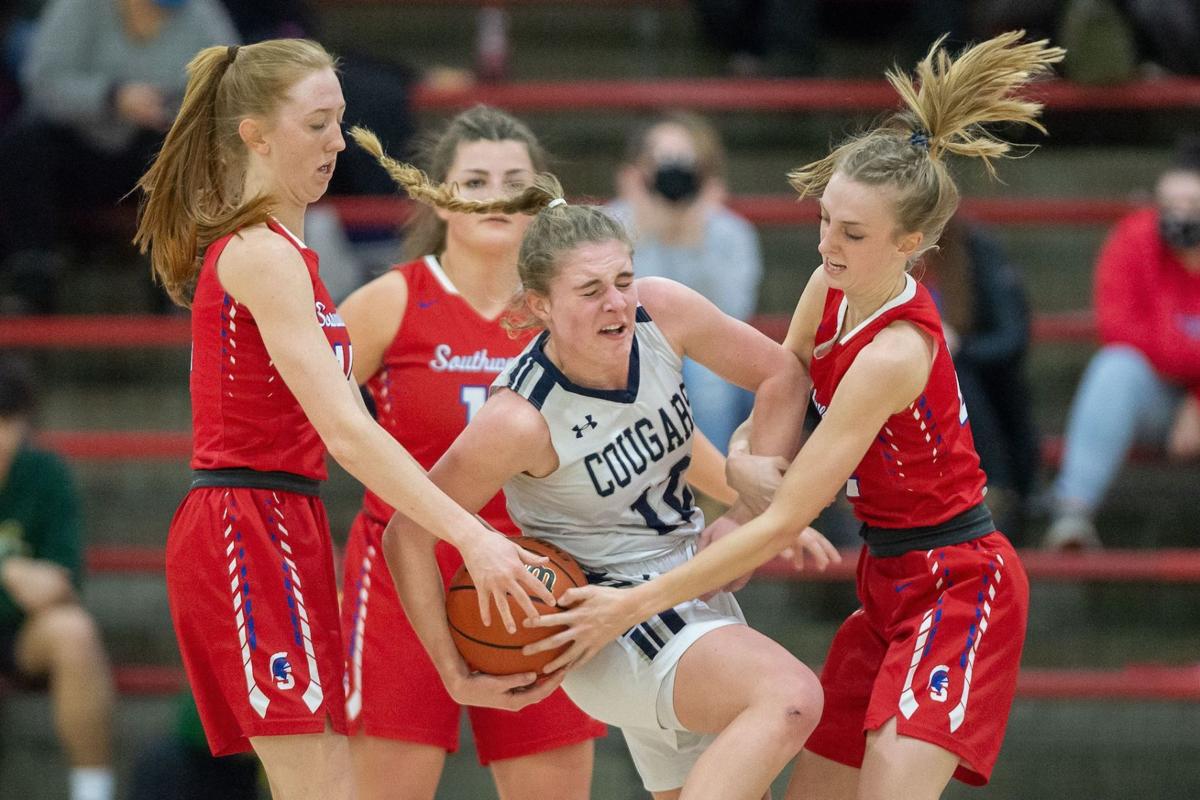 Southwestern’s Abby Muck and Maggie Correll attempt to steal the ball during their 49-39 loss to Greenwood Christian during the Regional Championship game held at Southwestern. 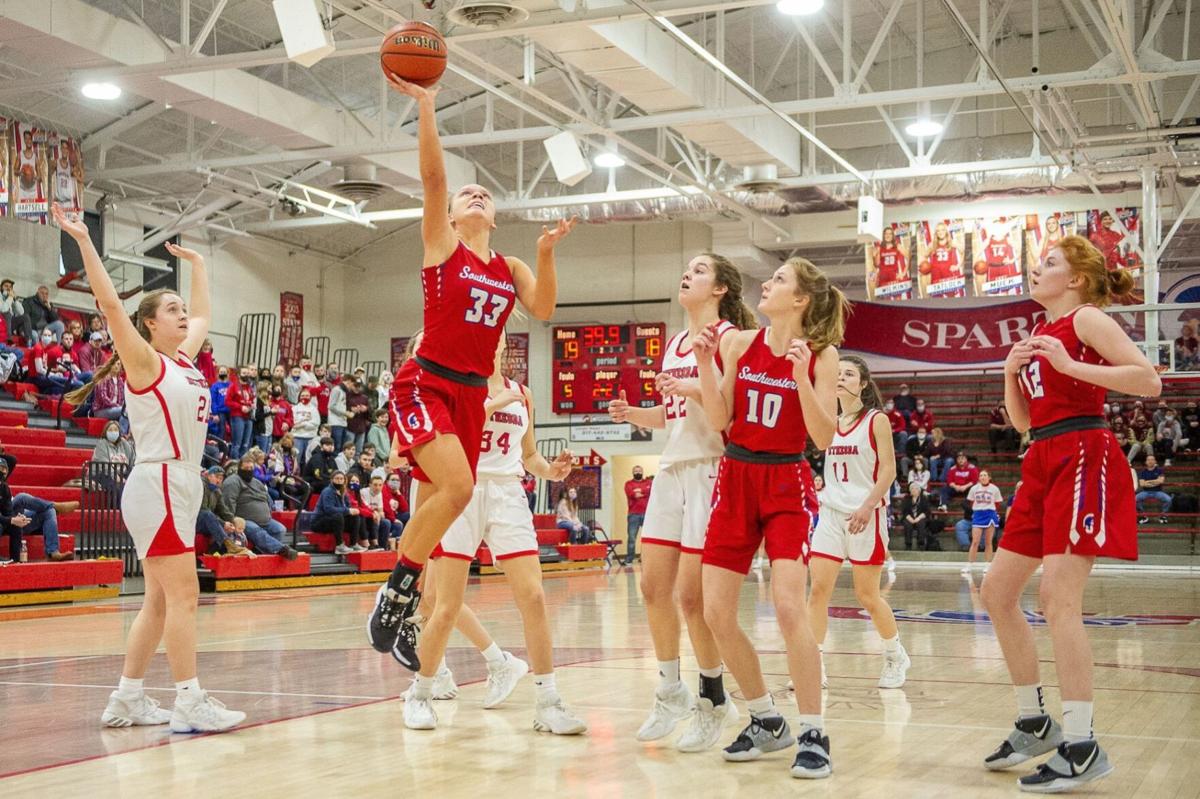 Southwestern’s Trinity Tatlock (#33) goes up for two of her team-high 16 points during their 38-13 victory over Bethesda Christian during the Regional Semi-Final game held at Southwestern. 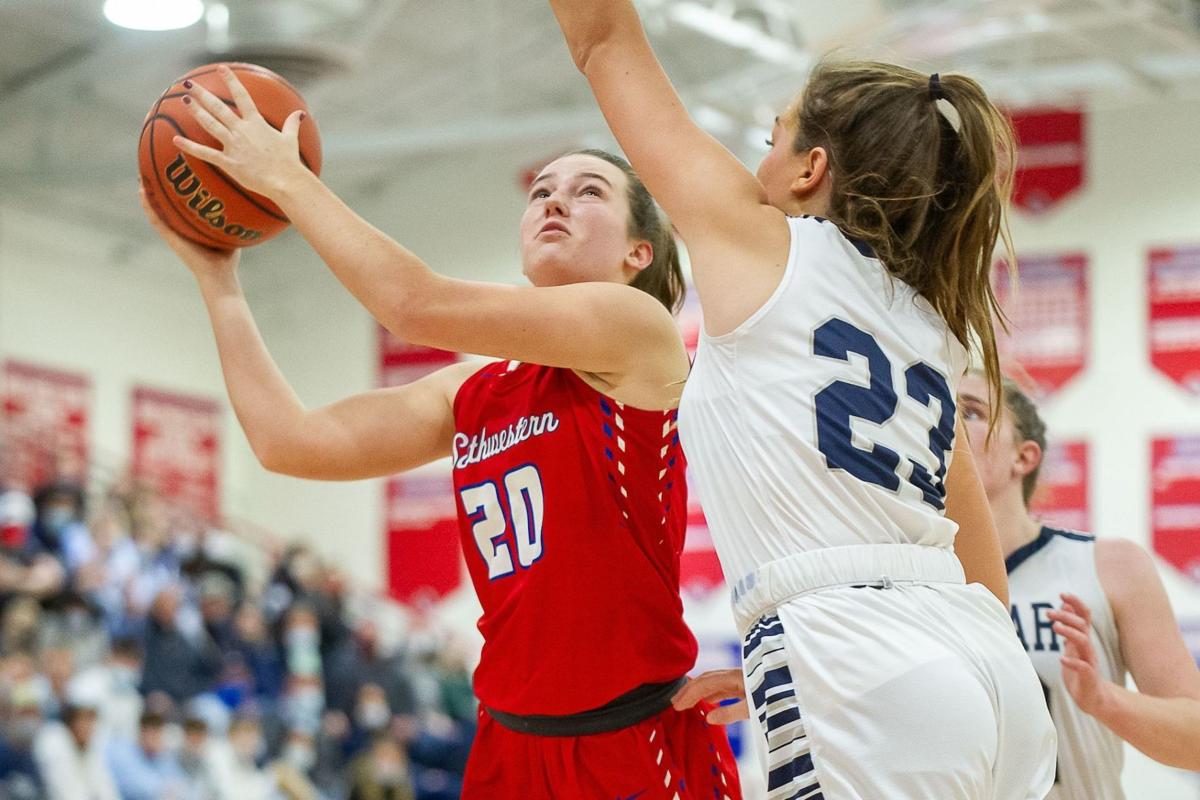 Southwestern’s Lexi Wilkins (#20) fights for a layup during their 49-39 loss to Greenwood Christian during the Regional Championship game held at Southwestern.

Southwestern’s Abby Muck and Maggie Correll attempt to steal the ball during their 49-39 loss to Greenwood Christian during the Regional Championship game held at Southwestern.

Southwestern’s Trinity Tatlock (#33) goes up for two of her team-high 16 points during their 38-13 victory over Bethesda Christian during the Regional Semi-Final game held at Southwestern.

Southwestern’s Lexi Wilkins (#20) fights for a layup during their 49-39 loss to Greenwood Christian during the Regional Championship game held at Southwestern.

At the beginning of the season, first-year Southwestern coach Garrett Krieg expected his team’s offense to be its strength, and what it would rely on to win games.

By the end of the season, with the offense struggling at times to put points on the scoreboard, it was the defense that helped the Spartans stand apart.

On Saturday, the team’s ability by the end of the season to get deflections and force turnovers, leading to fast-break opportunities, didn’t come through against a tough Greenwood Christian team. Southwestern lost, 49-42, in the regional final to the Cougars, which won their second consecutive regional championship. Greenwood Christian (16-6) advanced to play Loogootee in the semi-state this Saturday for the second year in a row.

“We dug ourselves a hole,” Krieg said. “Against good teams, when you dig yourself a hole, it’s tough to come out of that hole. We had to come out and pressure them a little bit. We couldn’t get deflections. We couldn’t get key rebounds because we were out of position because we were trying to do things we’re not accustomed to. They picked us apart in certain situations. We had a great run. I couldn’t be more proud of the girls.”

The Spartans (18-8) shot 39 percent from the field for the game but it was the second quarter in particular that hurt.

Southwestern turned the ball over six times as Greenwood Christian pulled away with a pair of 3-pointers, the first from the top of the key by senior Brooklyn Stubblefield just past the halfway point; the second with 31 seconds remaining by junior Danielle Simon.

That made it 27-16, but the Spartans settled for a nine-point deficit entering the half on a field goal by junior Lily Kerber with five seconds remaining.

Despite shooting the ball well in the first quarter (5-for-10), the Spartans couldn’t sustain that effort.

Southwestern shot 35 percent the rest of the way.

“We struggled shooting the basketball,” Krieg said. “We got good looks. Sometimes the ball doesn’t go in. We did exactly what we wanted to do. We played to our game plan. Unfortunately Greenwood Christian put the ball in the basket more than we did.”

The Cougars patiently ran their offense, resulting in good looks. That resulted in shooting 42 percent for the game.

Down 42-32 in the fourth quarter, Kerber, who led the team with 13 points, hit a 3-pointer from the top of the key to pull the Spartans to within seven with 4:23 remaining in the game. She hit another big three from the same spot about three minutes later to pull to within six, 45-39.

But the Spartans were unable to string enough defensive stops and were forced to send the Cougars to the win. Greenwood Christian made enough of those trips to keep the game out of Southwestern’s reach.

Twice in the game, there were instances where a Southwestern player thought she had made a layup and started retreating back on defense, only to realize she missed, Krieg noted.

“It’s frustrating, we moved the basketball around, we get a great look and we just miss it,” he said. “To me, I try not to show a lot of that emotion. I try to stay upbeat and positive. Those girls, they miss it, it kind of dwells on them a little bit. And then they lose a little bit of confidence or they don’t want to shoot the next one or kind of go up soft. I thought as the year went on, we did a better job of that.”

The Spartans advanced to the final after an impressive defensive effort against Bethesda Christian in the semi-final that morning, winning 38-31.

Despite struggling to find its scoring touch, the Spartans held the Patriots to 25 percent shooting from the field.

Freshman Kenzie Fulks, who came into the day averaging 26 points, was limited to 18, including making all seven of her free throw attempts.

“That won us the first game,” Krieg said of the defense. “Our defense was incredible that first game. “I just thought if we’re going to keep advancing, we’re going to advance because we’re playing great defense.”

He noted that his team held Bethesda Christian to 20 points below its season average and Greenwood Christian to 16 below.

The four seniors on the team – Maggie Correll, Abby Muck, Trinity Tatlock and Lexi Wilkins – leave behind a tremendous legacy in the program.

Three of them started three years and Wilkins started all four. Southwestern won its first sectional championship since 2013 and seventh overall in program history.

Krieg said he could talk about each girl for 20 minutes, starting with Tatlock’s humor.

Tatlock “always had a smile on her face” and would lighten the room when the team was having a bad practice, he said.

Correll and Muck are “identical in my book,” he said, leaders both vocally and by example, particularly on defense.

“They work hard every day,” he said. “Those are girls that I think our younger players can really look up to.”

And Wilkins led by example, coming in before practice and staying late to work on her shot.

“We’ll miss every single one of them,” he said. “They’ve grown as a player and as a person. I can’t wait to see what they do in the future.”

Who Benefits from School Choice?

The Republican supermajority in the Indiana General Assembly is currently attempting to prioritize private education benefiting fewer than 10 percent of students, while underfunding its constitutional duty of providing a system of common school open and available to all. It is public schools…

Use of algorithms can perpetuate bias

For most of us, the word “algorithm” is fairly new to our vocabulary. But badly designed decision-making algorithms have a growing impact on our lives and can do a great deal of damage.