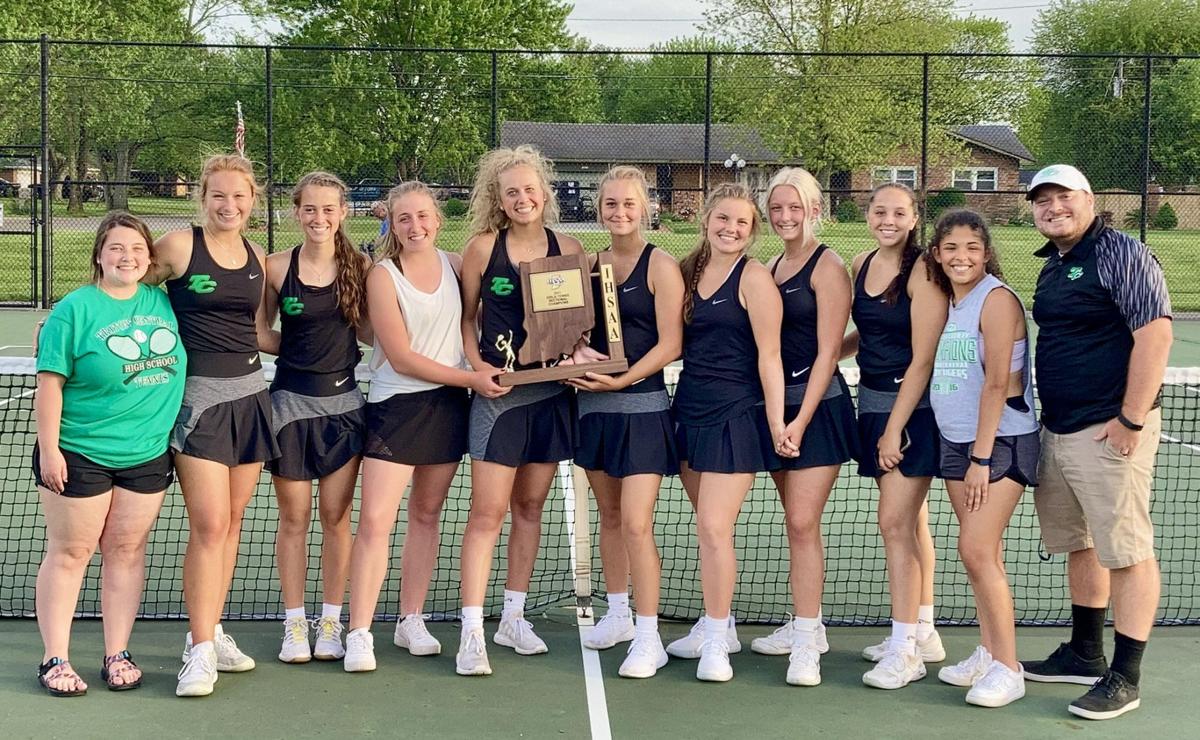 The Triton Central girls’ tennis team celebrates after winning the Shelbyville Sectional Friday at SHS. The Tigers beat the host Golden Bears in the final, 4-1. 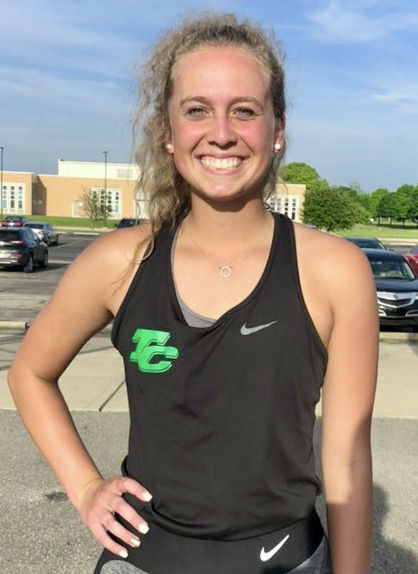 The Tigers were poised and confident – much like they have been all season. Entering the postseason with an undefeated record, the Triton Central girls’ tennis team continued its strong play during the Shelbyville Sectional.

The Tigers capped off an impressive week, topping Shelbyville 4-1 in the sectional championship Friday. TC, which is now 16-0, beat Southwestern and Morristown 5-0 earlier in the week.

Having two girls who can play No. 1 singles certainly helps, but it was a total team effort from the Tigers, who have won four consecutive sectional championships.

Tackett finished her season with a 12-8 record at No. 2 singles.

Schiffli, who will play volleyball at Jacksonville State, went to state as a sophomore while playing doubles at Franklin Central. Although this is her first season playing singles, she has made it look easy. With a powerful serve and quick feet, Schiffli is extremely tough to beat.

“I played volleyball mostly during the offseason, but I did these tennis camps through (the University of Indianapolis).”

Schiffli’s mom played volleyball at Triton Central. Her love for tennis came from her grandfather, she said, as she started playing in the sixth grade.

“I am not saying I am better at it, but I like volleyball more,” said Schiffli, who was all smiles after the sectional championship.

TC head coach Austin Hall said he wasn’t sure what to expect this season following COVID-19. It is hard to go undefeated through sectional play during any season – let alone the season immediately following a pandemic.

“After not having a year of tennis, I was a little unsure of where we would be at,” Hall said, who has also won a sectional title with the TC boys’ tennis team. “I knew we would have pieces, I wasn’t sure where everyone would fall into place. Having Brooklyn come in and take that No. 1 spot tremendously helped.

“I am proud of the girls. We were expecting a close match (Friday) and knew we had to play well if we were going to win.”

Shelbyville’s Knox, despite the loss, finished 11-11 overall this season at No. 1 singles. Her improvement since her sophomore season was obvious. Knox spent her offseason playing at the Indianapolis Racquet Club, which made a huge difference in her game.

Excelling at tennis is in her blood as her mom, Tammy Knox, played Division I tennis at Murray State in Kentucky.

“I went and did clinics at the IRC every Wednesday,” Knox said. “That honestly really helped. I was with one of the best pros there. Placement and helping my serve, it all got a lot better and prepared me for the season. It helped when I didn’t have a junior year. Coming in this year, I wanted to play No. 1 singles.”

Knox won a set when playing against her Delta opponent earlier this season, which doesn’t happen often. The Eagles are consistently one of the best programs in the state each year.

“We think that is the first set someone (from SHS) won against Delta in at least the last six years,” Knox said.

Triton Central will now focus on the Center Grove Regional. The Tigers are set to face Roncalli Tuesday at 4:30 p.m.

Waldron’s No. 1 doubles team of Mackenzie Shaw and Megan Bogemann are also still alive in the state tournament. They will continue sectional play Tuesday at Center Grove. The pair will battle the Rayl twins from Franklin Community at 4:30 p.m. on Court 7.